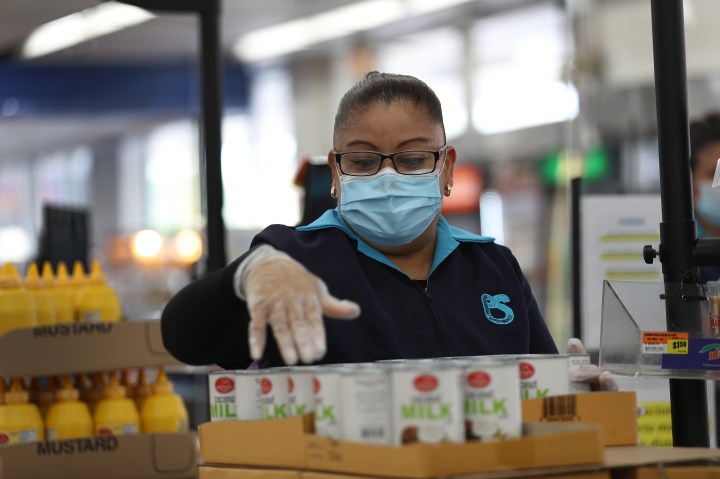 COPY
A cashier wears a mask and gloves as she works at the Presidente Supermarket in April in Miami, Florida. Jobs that are considered dangerous are disproportionately held by people of color. Photo by Joe Raedle/Getty Images
Race and Economy

A cashier wears a mask and gloves as she works at the Presidente Supermarket in April in Miami, Florida. Jobs that are considered dangerous are disproportionately held by people of color. Photo by Joe Raedle/Getty Images
Listen Now

This year, the Federal Reserve kicked off a series of events aimed at understanding how structural racism affects the economy. As part of that series, “Marketplace’s” Kimberly Adams moderated a panel discussion focused on racism and employment. Academics, workers rights advocates and business leaders talked about issues related to occupational segregation and discrimination, and laid out their ideas for addressing them.

“A just and inclusive economy is only achievable by centering racial equity,” said Rebecca Dixon, executive director of the National Employment Law Project. “The fact that a disproportionate share of people in underpaid, insecure and unsafe jobs are Black and brown is not inevitable, nor is it accidental. Opportunity is segregated in the United States.”

To dig into that idea a little deeper, Adams talked with Dixon about what occupational segregation is and how investing in the Equal Employment Opportunity Commission (EEOC) could help address it. The following is an edited transcript of their conversation.

Kimberly Adams: As we heard in that clip, you brought up the fact that opportunity is segregated in the United States. And the term occupational segregation was thrown around a lot in that panel. Can you talk to me a little bit more about how this shows up in the economy?

Rebecca Dixon: So we definitely know that housing is segregated, and we all have a pretty good understanding that in some places, education is segregated. But the labor market is also extremely segregated. Almost 90% of occupations in the United States, even after you account for education, are racially segregated. The lowest-paying jobs that are most dangerous and most dirty, are filled by people of color, especially Black folks and Latinx folks.

Adams: You mentioned also, in that clip, that this type of segregation is not accidental. That implies that there’s some sort of action that perpetuates this.

Dixon: Right. So the major action that perpetuates this is employment discrimination. Black folks are not hired into jobs, whether they’re qualified or not. They’re not promoted when they’re in those jobs. The other piece of this is systems and structures. So if the competitive jobs now require more education, but we have Black and brown folks in neighborhoods and schools that are not serving them, we can see how that deficit then translates to being undervalued in the labor market as well.

Adams: You laid out some solutions, one of which was investing in the Equal Employment Opportunity Commission. Can you remind people what that agency does and why you think it needs more investment?

Dixon: Yes. So when the Civil Rights Act of 1964 passed, it was supposed to get rid of discrimination and employment. And the Equal Opportunity Employment Commission was set up to actually monitor and enforce that law. And what we saw when that happened was big progress in terms of integrating the labor market. But that has basically been flat since the 1980s, and that is because the EEOC is actually a politically mediated organization. And so, we’ve had administrations that have been more friendly to the EEOC, in which cases they’ve been able to have more staff and actually close more investigations. Where we currently are is that the staff for the EEOC is actually 150 investigators less than what they had a decade ago. And so when folks are bringing claims, it’s very hard often to get relief or to get your issue resolved, or to receive a settlement.

Adams: I want to play a clip from the panel that you were on with the Federal Reserve series on racism and the economy. It included Josh Bolten, who’s president and CEO of the Business Roundtable [and] who was also at the event. And here’s what he had to say:

Joshua Bolten: We’re not going to litigate our way to racial equity in this country. That is just plain. We’re only going to do it if it’s a broad-based societal commitment.

Adams: He talked about commitments from Business Roundtable members to improve their recruitment and hiring practices, doing more to train and promote from within. What’s your response to that?

Dixon: My response is that the law really does lead policy. So we did have employers that made changes to the way that they hire, to the way that they promote when we had the EEOC come into being. And employers didn’t do that voluntarily. They did it in reaction to this law. And when you have an agency that is, you know, everyone knows that it’s weak and understaffed, that is not going to encourage folks to actually follow the law or even go beyond the law. And I would say that there are employers who are trying to do it right, but we can’t depend on the honor system. We can certainly use the law to sort of set out the foundation and the marker.

Adams: You also talked about needing the political will to challenge labor market inequities. We’ve had a government that can’t even seem to agree on the basics to deal with our current economic and more importantly, health crisis. What is your take on the actual chances that there is the political will to address these issues?

Dixon: I’m actually excited about this question, because we’ve all lived through the summer with the racial reckoning and the uprisings. And I think that this awakening and awareness is going to lead to pressure to actually create that political will. And I think with a change in administration, we will have the opportunity for that administration to actually put in folks who prioritize not only enforcing the law but also doing things proactively to help employers comply with the law.