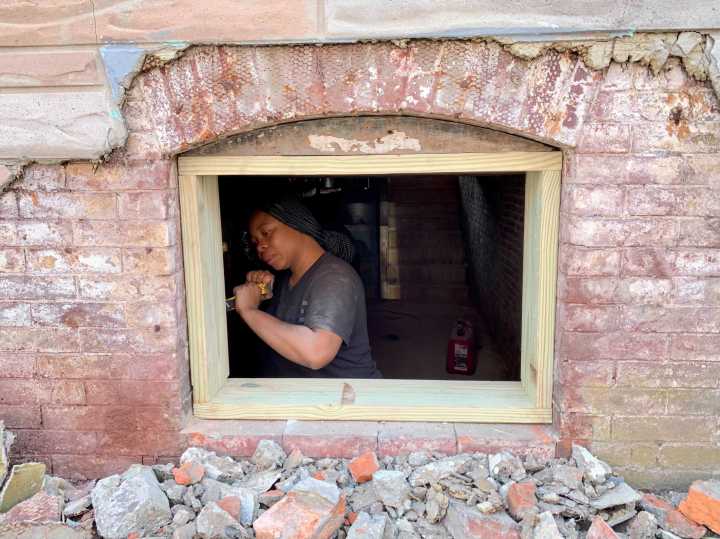 In the 1900 block of Etting Street in west Baltimore earlier this year, Tonika Garibaldi led a tour of newly-renovated brick row houses.

“We just finished the three houses that we’re standing in front of, and the ladies are securing their loans to purchase the homes,” she said.

Garibaldi is program manager of Black Women Build – Baltimore. Marketplace has been following the group for the past year as it rebuilds a block of vacant and dilapidated houses, some of which had been empty for decades. The nonprofit trains Black women in construction skills to help restore houses they’ll eventually buy.

On the tour were some community development folks, a couple of artists, and Rev. Grey Maggiano, rector of Memorial Episcopal Church. It had just written a $15,000 check to Black Women Build as reparations for the church’s role in creating the housing conditions here. The goal, Maggiano said, is “to begin to repair and restore the broken bond between this part of Baltimore and Bolton Hill, which is just a few blocks over.”

A few blocks over, but a world away. The Etting Street houses are in Upton/Druid Heights, a historically Black area where nearly one in three houses is vacant and the median household income is $21,000. Bolton Hill, where the church is located, is a more affluent, whiter neighborhood — by design. In 1910, parishioners of the church helped write the country’s first housing segregation law to keep Black people out. While Bolton Hill prospered, decades of redlining and other racist policies supported by the church hollowed out Upton/Druid Heights.

“You go four blocks over, which was not redlined, and you see the tree-lined streets, you see the garbage being picked up,” said Shelley Halstead, executive director of Black Women Build – Baltimore. “You see the houses appreciate. You don’t see houses falling in on themselves.”

The racial gap in homeownership and home equity are a big reason the median wealth of white households is about ten times that of Black households. Halstead founded the nonprofit to help close that gap.

On a recent afternoon, she and Bryanna Vellines framed a basement window in an old brick row house. Vellines, 28, started working with the group last summer in hopes of buying one of the houses on the block. Halstead hired her to help rehab more of them. So far, the group has finished four houses.

“They’re so cute now,” Vellines said. “It’s almost hard to believe — even though I’ve been here the whole time and I’ve been doing it. It’s just like, ‘Yeah, it looks way better already.'”

Now Vellines is working to qualify for a mortgage. Before the formal reparations plan, Memorial Episcopal Church raised money for Black Women Build to help with down payments.

“A lot of people here in Baltimore aren’t homeowners,” Vellines said. “A lot of people rent, so to give people opportunities to create generational wealth is a huge thing.”

Still, money can only accomplish so much, Halstead said.

“It’s never going to be up to the person harmed, what needs to happen,” she said. “It’s going be what the people who did the harm, or made out from the harm, they’re going to decide what they can give — not what they should give, what they can.”

The church, whose congregation is still mostly white, is working with Black leaders on how to spend the reparations fund. Other recipients include programs supporting single Black mothers and their daughters, and voter engagement.

Natalie Conway, who grew up in west Baltimore, is now a deacon at Memorial. It was her discovery that her ancestors had been enslaved by the founding rector of the church that sparked the reparations effort. She agreed the harm can never be undone.

“So you have to think of other ways to repair the breach,” Conway said. “Enough is never enough, but it’s a start. It’s a start.”