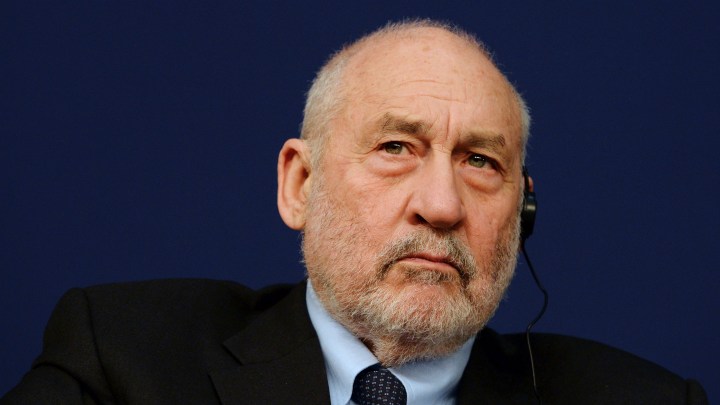 COPY
Nobel prize-winning US economist Joseph Stiglitz listens during the opening session of the 6th edition of the "Entretiens du Tresor" seminar at the Economy Ministry in Paris on January 31, 2017. ERIC PIERMONT/AFP/Getty Images

Sasa Woodruff and David Brancaccio May 30, 2019

Nobel prize-winning US economist Joseph Stiglitz listens during the opening session of the 6th edition of the "Entretiens du Tresor" seminar at the Economy Ministry in Paris on January 31, 2017. ERIC PIERMONT/AFP/Getty Images
Listen Now

Joseph Stiglitz, a Nobel laureate in economics, has argued for years that our economic and political systems are rigged against the middle class and in favor of the wealthy. Marketplace’s David Brancaccio recently sat down with Stiglitz to discuss the themes and recommendations contained in his latest book: People, Power, and Profits: Progressive Capitalism for an Age of Discontent. This is an edited transcript of their conversation.

David Brancaccio: So you blame the discontent on a lot of things, from unregulated media to the financialization of the economy, what some might call “Wall Street unbound.” I think you have “globalization done wrong,” but there’s also tech, technology. Why do you think technology is leading to some of this discontent?

Joseph Stiglitz: Well, partly, it’s giving rise to anxiety. Many people are worried about losing their jobs, other people may feel that they won’t lose their jobs, but their wages are at risk.

David Brancaccio: Exactly. Yet we get taught in econ class that tech is terribly disruptive, but history shows that ultimately more and better jobs are the result. Shouldn’t we just wait this out, this disruptive period?

Joseph Stiglitz: This time we have machines that are not only stronger than humans, that not only can process more information, but, at least in some limited areas, can actually learn better. And the critical issue is whether the innovation will be replacing labor or augmenting labor, making us able to do what we do even better. A lot of the innovations are going to be replacing unskilled labor. The driverless cars and trucks have gotten a lot of attention, and we’re talking about millions of jobs for people who do not have a college education.

David Brancaccio: The power of the book is that you don’t just talk about the problems, you list prescriptions, if society would adopt them. But on trying to remedy potential problems with more technology taking over jobs. What are some prescriptions? One that you mentioned is the universal basic income?

Joseph Stiglitz: That’s one. But I’m a little critical of that, because it seems to me that part of dignity is having a job, and a universal basic income would reduce pressure on government to make sure that there’s a job with decent pay, decent working conditions, available for everybody, which I think there should be. And that’s why another suggestion is some kind of guaranteed employment. Hopefully, the market will provide that kind of full employment, but I wouldn’t count on it. And if it doesn’t, I think the government has to be ready to step in.

David Brancaccio: You also just argue for more progressive taxation, because there are certain people who see the benefits of this technology more than others, and you think the tax system could help?

Joseph Stiglitz: Yes it could, we’re unusual in that those at the very top actually pay a lower tax rate than those below. Warren Buffett made a big deal about the fact that he was paying a lower tax rate than his secretary. He thought it was morally wrong, and I agree. Capital taxes, carried interest, the kinds of special deal that’s given to certain hedge funds, private equity, are things that, really, we should get rid of. We could also extend ideas like the earned income tax credit. In other words, making sure that even if the market doesn’t pay adequate wages, the take-home pay of low-income individuals makes sure that they don’t live in poverty.

Joseph Stiglitz: I think it’s part of the big political battle that we’re engaged in right now. Remember that there have been large pieces of legislation and many court decisions which have weakened the bargaining power of workers, making them even more precarious positions, and many of the new technologies having increased the precariousness of workers, undermining their bargaining positions. And this brings together several of the themes that I’ve talked about in the book, for instance the fact that globalization, the way it’s been managed, has resulted in pitting American workers against low-skilled workers, low-wage workers in developing countries. Again, eviscerating their bargaining power.

David Brancaccio: And your point is it didn’t have to be that way. That globalization could have been managed differently.

Joseph Stiglitz: Very much so. Other countries have managed it much better. Particular criticism I raise is against what are called the “investment provisions” of a number of trade agreements, which basically extend stronger property rights to American firms that invest abroad, protecting them against changes and regulations in ways they are not protected in the United States, and allowing them to despoil the environment, impose safety risks on workers and so forth. The way we managed globalization actually exacerbated the weakening of workers’ bargaining power.

David Brancaccio: But you’re very open in the book. I mean, something big has to change for these shifts to even begin to happen. A lot of it has to do with the role of money in politics, you argue.

Joseph Stiglitz: That’s right. If we’re going to actually achieve the kinds of changes that we need, we’re going to have to have a better politics. A concern that I raise is that we’ve been engaged in processes which entail disenfranchisement, weakening the power of ordinary individuals in the political process, both through gerrymandering and through the power of money, and weakening some of those systems of checks and balances. In fact, we’ve wound up with a system where a minority is determining our politics. We used to worry about a majority, and then protecting the rights of minority. Now we’re in a situation where the question is: Are we protecting the interests of the majority?

David Brancaccio: So, some form of campaign finance reform. But also you argue for addressing the issue of redistricting gerrymandering that accentuates the polarization in American politics.

Joseph Stiglitz: Very much so. And there are lots of other reforms, for instance, the United States is one of the few countries where polling occurs on a workday, and some states have deliberately tried to make it more difficult for people to cast their ballot. They make it more difficult for them to register, they have short polling hours, they put the polling booths in inconvenient places when they’re trying to discourage certain groups from voting. So, we’ve actually had a war, almost, against a full representation of the views of large parts of the country.

David Brancaccio: I’m assuming you hope this view of progressive capitalism gets injected into the coming presidential campaign.

Joseph Stiglitz: Oh, very much so. I was hoping that some of these ideas would be taken up in the political campaign, that the problems, which we as an economy, we as a society, and we as a democracy face; I hope I could articulate them. And the solutions I propose, I hope they will be taken up by various candidates in various ways. I try not to be prescriptive or say, “this is the only way to do it.” It’s trying to provide a menu of alternatives. And in the course of the political debate in the coming months, the country can decide on which of the alternatives best suits our country’s needs.

David Brancaccio: But I do notice you didn’t just write a secret position paper and send it to one candidate. This is up for grabs among many candidates?

Joseph Stiglitz: Very much so. And the good news is that much of what I say reflects the perspectives of many of the candidates who are currently running for president.