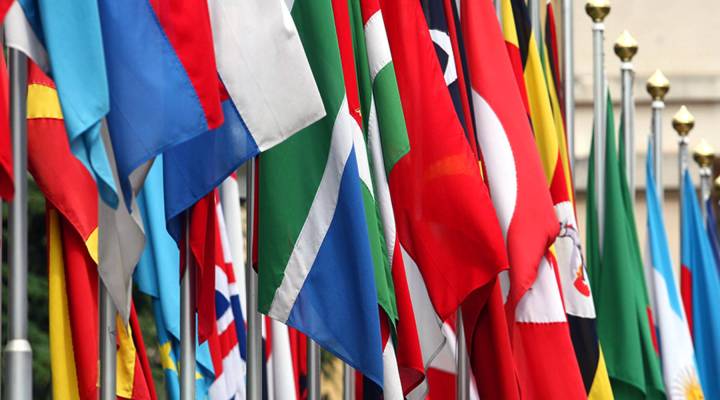 The Economist magazine celebrates its 175th anniversary this year. The publication, according to current editor-in-chief Zanny Minton Beddoes, was founded to espouse “classical liberalism,” or the belief that open societies, freer trade and the preservation of individual freedom are important to modern progress.

But the rising popularity of protectionist policies in the United States, the United Kingdom and other countries has led Minton Beddoes to reevaluate liberalism’s role in the world.

She joined David Brancaccio to discuss what needs to be done to help classical liberalism adapt to the 21st century.

David Brancaccio: Zanny, I hold an American passport, so when you say “liberal,” I think certain things. But  you and the gang over there are liberals of a different stripe?

Zanny Minton Beddoes: I’m a classic English liberal. A classical liberal, which is different to the modern interpretation of liberal in America. You’re quite right. Classic English liberalism of the sort that the Economist was founded to champion and still espouses is about open societies and free markets. It’s guided by the values that were written about by great thinkers such as John Stuart Mill, a belief in progress, a distrust of powerful interests and respect for individual freedom. And it’s interesting because there are elements that we share in our classic English liberalism with progressives, if you will, in the U.S. and there are elements that we share with the other side.

David Brancaccio: And you’re very much worried, hence the initiative in The Economist here, that your kind of liberalism is getting trampled by such forces out there as populism?

Minton Beddoes: Yeah. I mean, we turn 175 this year. We were founded in 1843 to fight against the Corn Laws, which were prohibitive and very punitive tariffs on grain in 19th century Britain. As I reflected on us turning 175, it struck me that right now is a time where for different reasons, that sort of classical liberal world view — having really been in the ascendancy for quite a long time — is now under quite considerable criticism and attack from different quarters. If you look around many parts of the world, there’s growing authoritarianism. There’s the phrase that is used by many of illiberal democracies, whether it’s Hungary, whether it’s Poland, whether it’s Turkey, whether it’s Russia. You name it. And at the same time, there’s the rise of populism on your side of the Atlantic and indeed in mine, which is driven much more by a sense of nationalism, exclusive nationalism, in some cases racism, a kind of open versus closed view of the world. There are the closed people and we are very much the open people. And it’s partly I think been driven by a sense that the ‘”liberal elite,” if you will, have been sort of running the world for a while and made a lot of mistakes. And I think there a lot of things that people are justifiably unhappy about, whether it’s the aftermath of the financial crisis of 2007 and 2008, whether it’s the kind of pace at which societies are changing, there are a lot of big and important issues we’ve got to deal with. And I think for those people who believe in an open society and free markets, it’s important now to stand up and say why that’s valuable, but also to engage in serious conversations about what are the right kind of policies to sustain that. So what we’re trying to do is to engage in that kind of conversation and to engage with supporters of our worldview. But also with our critics in lots of different ways, you know, by having outside commentary, by having debates, by having podcasts by having conversations like this. And hopefully to engender, I think, the kind of conversation that we need to have to think about how do you revitalize liberal ideas to make sure they are appropriate and have the appropriate kind of policies for the 21st century?

Brancaccio: But among the things you have to address is, if not at the center, near the center of your classic liberalism was the idea of open markets, freer trade. How did that work out for many people? It didn’t lift all boats.

Minton Beddoes: So I’m still firmly of the view that freer trade overall generates net benefits — it’s a good thing. But you’re absolutely right that there are losers, and that as societies, we have insufficiently thought about what to do to retrain those people, assist those people, help those people cope with a 21st century economy. And it’s trade and technology, if you will, because the impact on people is somewhat similar — whether your job is displaced by imports or whether it’s displaced by automation. But we haven’t thought enough about the consequences for people and how to equip people with the skills they need in the 21st century. And one of the really interesting things is if you look at what we’re going through now, it’s very similar to many of the ructions that affected the early 20th century economy when we had a similar industrial revolution or similar scale of change. And if you look then at the degree to which social and economic policies dramatically changed, whether it was the introduction of progressive taxation, whether it was universal secondary education, all kinds of very big changes happened. Often, I may say, pushed by radical liberals. That’s the scale of the conversation that I think we need to be having about what is the nature of the sort of society and policies we need to create for the early 21st century.

Brancaccio: From your perspective there seems to be an optimism built in here, that you haven’t lost the battle already. I mean, we shouldn’t write the obituary on classic liberalism in the 2016 election?

Minton Beddoes: I certainly don’t think you should write the obituary for it because I think for two reasons. Firstly, I think the values that underpin all liberals frankly — classical liberals, all liberals — of respect for the individual and freedom are worth fighting for. But more importantly I think liberalism has adapted over the years and has evolved and has evolved in response to changed circumstances and that ability to evolve is what kind of gives me optimism. To survive and to flourish, classical liberalism has to be engaged with the 21st century world and this is why we’re having this conversation. Why we want to engage with people who agree with us [and] people who don’t agree with us so that across lots of the most important aspects of what will constitute our future, whether it’s the role of technology, whether it’s the future shape of capitalism, whether it’s the importance of free speech, what to do about immigration — all these big themes. We want to have a conversation about what does it mean to be liberal in the 21st century and how do we go about creating that kind of a society.