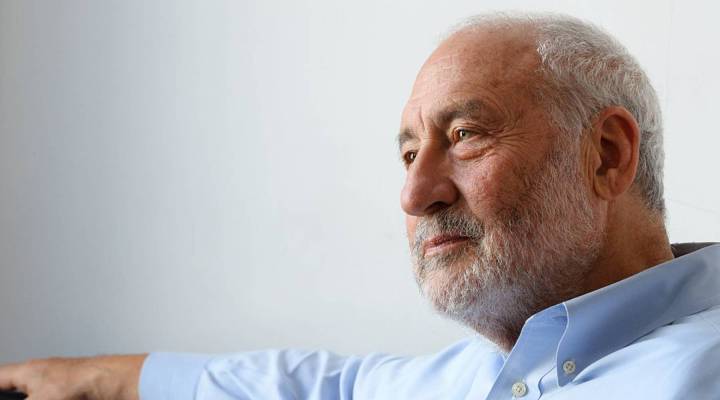 A Nobel Prize-winning, left-leaning economist and President Donald Trump actually agree on something. And it’s that globalization — freer trade with less friction at borders — really stuck it to lower-income people. But there seems to be no agreement at all on remedies for how to fix this issue.

Joseph Stiglitz is the Nobel Prize-winning economist, who’s now a professor at Columbia University. He was chair of President Bill Clinton’s Council of Economic Advisers and chief economist at the World Bank. He’s just updated his bestselling book from 2002. The new version is called “Globalization and its Discontents: Anti-Globalization in the Era of Trump.”

Stiglitz joined us to discuss trade and where the global economy is headed. Below is an edited transcript of the conversation.

David Brancaccio: That’s the key right. It’s not that the U.S. workers who feel they were suffering under the globalization system are wrong.

Stiglitz: That’s right. They have suffered as have many in the developing world, say in Africa. The winners are large corporations, and so the major thesis of the book is that we can create a globalization that works for all, but we’ll have to change the rules. It can’t be a corporate-led globalization.

Brancaccio: You and President Trump would agree that globalization went wrong. You’d like to fix it with stronger international institutions. Would you say that’s not what the president would want to do?

Stiglitz: Precisely. He wants to destroy the rules-based system that we’ve created over the period since World War II. He wants to go behind protectionist barriers that would actually result in doubling the damage that American workers suffered. They suffered when we opened up our markets. We created now efficient global supply chains and destroying those global supply chains is going to be just as disruptive, and the American workers are going to be worse off once again.

Brancaccio: You’re no fan of Mr. Trump. Among other things in the book, you call him “bigoted” and “extremely uninformed.” But you see a silver lining as he engineers a retreat from American leadership in these international institutions?

Stiglitz: America’s role in the global economy inevitably was going to diminish, we’re smaller relative to — as China, India, other emerging markets grow. He’s hastened that change, but where he’s gone really wrong is American leadership is still important. And our withdrawal from this will hurt the global system. But actually it’s going to also hurt the United States.

Brancaccio: Now you’re talking multipolar here, but one big pole is going to be China. How might a China-led globalization differ from what we’ve seen?

Stiglitz: Well, China-led globalization in some ways worries me because they are not concerned about human rights, labor rights. They probably aren’t even really concerned about competitive marketplaces. So in some ways they’re like Mr. Trump. They’re willing to do deals. And they see things as very deal oriented. Where the United States could and should have played a role in the past, and could and should play a role in the future, is creating a fair rules-based system that works for small countries as well as large.

Brancaccio: I was struck rereading the book about how, among the many things that you seem to have nailed back then in 2002, is this issue of multinationals and just how they’re taxed. This of course is a front and center public policy issue right now with companies doing fancy footwork so they end up paying taxes kind of nowhere. But you were onto that weren’t you?

Stiglitz: And Apple has become the modern poster child of using globalization for tax avoidance. It isn’t inevitable that we have a globalization which is used by the corporations not to pay taxes. It is not inevitable that we have a form of globalization in which corporations use the threat of moving jobs abroad to lower wages. None of this is inevitable. We could have managed globalization in ways that ordinary citizens would have benefited rather than just the corporations. Trade is beneficial. There are gains to be had from taking advantage of comparative advantage and specialization. That’s true, if you manage globalization right. But if you manage it wrong, the overall gains will be very small or even negative. But even worse, those gains will go to a very few people at the top and a majority of citizens can actually be worse off.