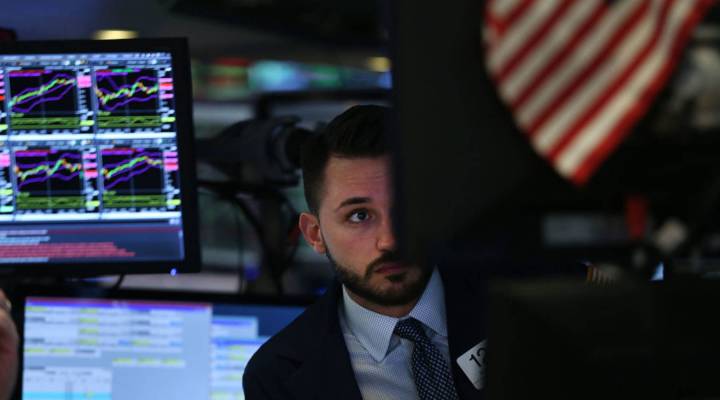 With the Trump administration’s withdrawal from the Trans-Pacific Partnership, public criticism of the World Trade Organization and renegotiation of the North American Free Trade Agreement, it’s clear that policymakers are reconsidering the role of the United States in the global economy. But what if the extreme happens, and the U.S. withdraws from global commerce completely? What does that future look like?

According to Adam Posen, the president of the Peterson Institute for International Economics, it’s a future where countries are a lot less likely to trust each other. In an article for Foreign Affairs magazine, Posen described how a world without U.S. economic leadership would be much more susceptible to conflict, period. Marketplace host Kai Ryssdal spoke to Posen about his article. The following is an edited transcript of their interview.

Kai Ryssdal: The headline on this piece is “The Post-American World Economy.” I wonder, based on my reading of your piece, whether we’re not already there.

Adam Posen: We’re halfway there. The world is already anticipating some of the things the Trump administration is going to do, Kai. But also, there’s been a lot of U.S. withdrawal in a soft way for several years already. So the world is already adapting, but they would rather have a continuing U.S. world economy if they could.

Ryssdal: Why would they rather have that? I mean, I get that, you know, why it’s in some people’s interest in this country to be doing that. Why does the rest of the world want, and/or need that?

Posen: The U.S. doesn’t always do the right thing. But on average, it both tries to do the right thing and professes to do the right thing more credibly than anybody else. A world where the enforcer of rules or the setting out of ideal behavior is Europe or China is just simply not going to be as trusted. The U.S. is the biggest country in the block, but it generally hasn’t been the bully. It’s been saying, “We should do commerce without bilateral pressure determining how that works,” and it’s worked out really well. The world’s gotten much richer over the last 50 years, 60 years as a result of that.

Ryssdal: With the acknowledgment that not everybody will agree with what you say, let me pick up on something that you did mention back there, and that is the word trust. I wonder, in three or seven years from now, when somebody else is in the White House and possibly there’s an attempt to re-engage the global economy, where does trust come into that equation?

Posen: It’s a really good question to think about. The system that the U.S. built with the buy-in from Europe, Japan and others is not just about trust. It is about a set of rules, it is about a set of institutions, so to some degree it can survive as long as the U.S. doesn’t directly attack those, as long as the U.S. pays its membership dues and lets itself be adjudicated by them. It doesn’t have to lead them. But I think there’s a good historical analogy to the late ’70s. There was a huge amount of distrust of the U.S. after the U.S. broke the gold standard, ran irresponsible fiscal policies, fought the war in Vietnam, and it took several years for the U.S. to come back into people’s trust, but eventually they did.

Ryssdal: I confess, I have your article up on the computer screen in front of me here in the studio. And it occurs to me, literally just now as I sit here and talk to you, nowhere in the title or the subtitle, “The Post-American World Economy: Globalization in the Trump Era,” nowhere is the word trade mentioned.

Posen: Yeah. In fact, ironically, even though trade is probably the most hot topic, especially under the Trump administration, but also it’s just so visible, and visceral, it’s actually probably one of the most resilient parts of the global economy. Some of these other things that are really important, including the role of the dollar, including foreign aid for developing countries, including crisis management, that are more vulnerable than trade.

Ryssdal: One of the things that’s been happening in this economy over the past number of decades, as globalization has taken effect, as jobs have been replaced by automation, and any one of a number of things, is that the middle class and the working class in America have lost economic traction. And to paraphrase the president from the campaign, and I get that this is slightly a loaded comparison, but what have we got to lose if we tried a different way?

Posen: A lot. There’s no question that wages have stagnated for a huge section of American workers, but nothing that we’re talking about trying in another way affects that. It’s like with NAFTA. I mean, the idea is not so much that we didn’t go through pain and adjustment to have NAFTA, but we got something for it. We got more stability below the border, we got cheaper goods, we got more competitive in a good way in terms of pressure on our business to behave well and to produce well. And so, if you take away NAFTA, for example, you go through all the misery of churn and jobs going away and people having to adjust in the hundreds of thousands millions. But you get nothing for it. So the churn comes either way, but you want to get something when you put people through it. And that’s part of what American globalization has done, is it’s gotten us a lot.

Ryssdal: Are you surprised at the speed with which, as you say, the post-American world economy has been arrived at? I mean, it’s been 13 months since the inauguration, 14.

Posen: I am not surprised because I think we’re only partway there, and I’m not surprised because even under Obama, there was an extended period of the U.S., partly due to Congress and due to bad feeling among a lot of the voters, of withdrawal. But I do think, if the Trump administration does go more forcibly down the road that they’ve been threatening going down, of the U.S. alone, U.S. as just a business competitor, everyone’s going to be surprised by the speed with which this turns. Europe and China in particular. They’re showing forbearance for the time being. They’re like, OK we want to see if the U.S. gets its act together, but once it becomes credible that the U.S. isn’t doing that, things will happen very fast.