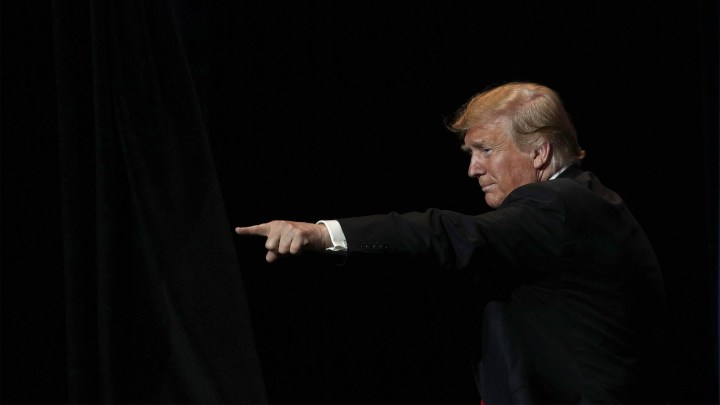 COPY
President Donald Trump at the National Association of Realtors legislative meetings and trade expo on May 17 in Washington, D.C. Alex Wong/Getty Images

The global economy could be headed toward recession, and trade may be the cause. As reported by Reuters on Monday, analysts from Morgan Stanley said that a breakdown in trade negotiations between the United States and China — and an escalation in tariffs — could have dire effects felt the world over. And with President Donald Trump threatening further tariffs on imported Chinese goods, we set out to answer the question: Are the Trump tariffs working as intended?

Clete Willems is a former trade adviser to the president who recently left the White House for the private sector. Willems spoke with Marketplace host Kai Ryssdal about the president’s trade agenda. The following is a transcript of their conversation.

Kai Ryssdal: So for those who don’t follow trade perhaps as closely as you and I do, give me the 30-second elevator pitch version of President Trump’s trade agenda.

Clete Willems: Sure. Well, what President Trump is trying to do is get his arms around a set of longstanding unfair trade practices that have been going around in the global community. I think the most prominent example of that is what’s happening with China. Obviously, he’s expressed concerns with the [North American Free Trade Agreement], with elements of the World Trade Organization, and I think in general with sort of a lack of equitable treatment when it comes to tariffs around the world.

Ryssdal: Do you think, though, that the president’s tariff policies are the way to get done what he wants? It seems that it’s very spur of the moment, shall we say.

Willems: Now I actually think since the president has been in office, what he has tried to do is to take tariff action in many cases as a means of leverage. You know, not all tariffs are created equal, as they say. So I could go through one by one and parse them, and I think with China, it’s really a means to an end.

Ryssdal: Fair enough. And look, it’s only a half-hour program, I appreciate you being willing to go through the Harmonized Tariff Schedule, but look, let me ask you a more fundamental question, and it’s going to sound like I’m poking the president in the eye, and I’m really not. Do you think he understands the way tariff works? Because if you look at his public pronouncements, his tweets, virtually everything he says about tariffs would seem to indicate he just doesn’t understand how they work. It’s not that the Chinese are paying, it’s not that there are billions coming into the United States from overseas, it’s American consumers who are paying these tariffs. And the president discounts that at every turn.

Willems: I think the tariff question actually is somewhat of a complex one. Now I will be the first to grant you that tariffs do have somewhat of a negative impact on the U.S. economy and on consumers. They can have an impact on businesses who need to get those products from abroad. I’m not a tariff guy. All of that said, who pays the tariff in any particular instance is not as simple as, ‘Oh, it’s all China, or it’s all the U.S. consumer.’ And what we’ve found is, we’ve analyzed it, is that it’s really different in each instance.

Ryssdal: I’m sure I don’t need to cite for you the academic research that shows in the Section 232 and 301 tariff cases that the president has imposed on the Chinese, it is literally American consumers who are paying, sometimes in excess of 100% of the tariffs. And more to the point though, with all respect, you didn’t answer the question. Does the president understand how tariffs work?

Willems: Well, I think that he does. And again I would paint the 301 and the 232 with a different brush. I think when the administration put in place the 301 tariffs, they were expressly designed to pick products that the U.S. could source from other places, and you actually do see some of that happening. On steel, I would grant you that’s a different situation. And I think that the steel tariffs were much more controversial within the administration itself for that reason.

Ryssdal: I’m not sure exactly when you left the administration, Mr. Willems, but the last you heard from folks inside the White House, what is your sense of the president’s sense of urgency on fixing and getting to a deal with the Chinese? And does it carry into the 2020 campaign cycle farther?

Willems: I left the White House about a month ago. April 19 was my last day. I went and actually got to see the president a couple weeks after that. I think that with respect to China, that the president is willing to keep at the current strategy as long as it takes to ensure that China starts playing by the rules. I think if you look, what you’re hearing from the Hill, you see Democrats and Republicans alike all saying, “Stay tough on China. Make sure you get structural reforms in China.” Where you’re getting feedback are things on steel and aluminum and saying we need to work with the allies more.

Ryssdal: So look, I hear you on what he is hearing from the Hill and from people inside the Beltway writ large. But every single farmer we talked to and virtually every single small business person with truly just one or two exceptions in the last year and a half has said, “These tariffs are killing us.”

Willems: Right. No, there’s no question that there is going to be some pressure from the business community. I’ve been surprised actually that that the business committee for the most part has stayed firm with the president and said, “You need to be tough on China because they’re hurting my business.” A lot of the pain that the agricultural community has been feeling in the past has been on the retaliation. The administration is trying to deal with that. But if we can get the commitments from China and the market access from China, it’s gonna be a much better situation.