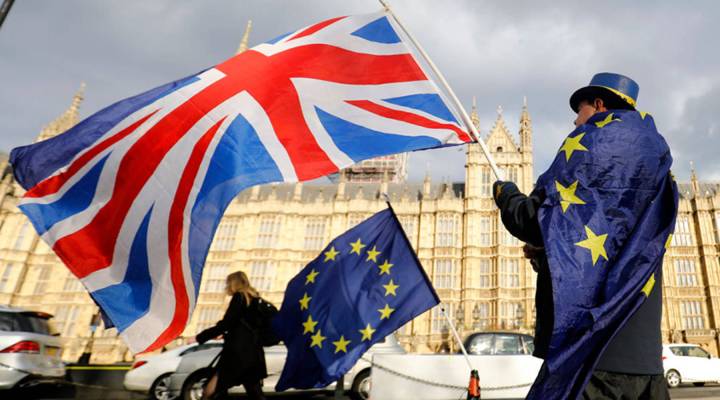 An anti-Brexit demonstrator waves a Union flag alongside a European Union flag outside the Houses of Parliament in London on March 28, 2018. TOLGA AKMEN/AFP/Getty Images
Brexit

An anti-Brexit demonstrator waves a Union flag alongside a European Union flag outside the Houses of Parliament in London on March 28, 2018. TOLGA AKMEN/AFP/Getty Images

Brexit. We’ve been talking about it for close to three years, now — from the moment the U.K. voted to leave the EU, to what Brexit means for businesses and individuals, and now the latest twists and turns of trying to secure a deal that makes sense for the future of the United Kingdom.

And while all of this may seem like something happening “over there,” Brexit affects the global economy and the United States itself. This is where Marketplace comes in. At the end of March, Kai Ryssdal and the team are traveling to the U.K. to break down Brexit and what it means for you.

What do you not understand about Brexit? What questions do you have? Send them along using the form below and we’ll try to get answers for you.

In the meantime, here are some basic explanations to help you make sense of what’s going on.

Brexit is a combination of the words “Britain” and “exit.” In other words,  Britain’s exit from the European Union.

What is the European Union?

The European Union (EU) is a political and economic union of 28 countries. Although member countries are all independent states, the EU eliminates border controls between them, allowing the free flow of goods and people. Products manufactured in one EU country can be sold to any other member of the union without tariffs. And the bonus for people who live in the EU? They can also live and work in other EU countries without worrying about visas.

When did the United Kingdom join the EU?

The U.K. joined what was then known as the European Economic Community — the precursor to the European Union — during the EU’s first expansion in 1973. Two years later, 67 percent of U.K. voters elected to stay — this was the last time the U.K. held a referendum over EU membership before 2016.

Well, it’s complicated. Since the U.K. joined the bloc in 1973, numerous attempts have been made to withdraw Britain from the EU. In 1983, Britain’s Labour Party tried to win the general election on a “leave Europe” ticket, but failed. In 1997, the then-newly formed Referendum Party made another attempt. In 2012, the British Prime Minister at the time, David Cameron, rejected calls for a referendum on EU membership, but promised one would be held if his party was re-elected. In 2015, Cameron was once again prime minister, and the stage was set for a Brexit vote.

A variety of polls suggest immigration to the U.K. and concerns over jobs and public resources were a large factor in the Brexit vote. The number of people eligible to live in the U.K. increased during the EU expansion between 2004 and 2007, when 10 eastern European countries were added to the EU community.

A voting form for the June 23, 2016 referendum on the U.K.’s membership of the European Union.

The U.K. held a referendum back in 2016 and decided to leave the EU. How did the vote shake out?

It’s a very long process. Britain’s decision to leave the European Union requires changes in trade deals, immigration rules, and border controls. In other words, lots of negotiations about the U.K. and EU’s future relationship. The negotiating period began on March 29, 2017 when the U.K. served the withdrawal notice under Article 50 of the Treaty on European Union, which states that “any Member State may decide to withdraw from the Union in accordance with its own constitutional requirements.” Per Article 50, once served, a two-year clock begins, unless an extension is agreed upon.

Is there a deal yet?

No. British Prime Minister Theresa May has been at the negotiation table, but with a deadline for Brexit looming — March 29 — the details still aren’t locked in. Britain voted to be out of the European Union, but some parties want to maintain certain ties.

There’s talk of a “no-deal” Brexit. What is this?

A no-deal Brexit is seen as worst case scenario for the U.K. It means the U.K. would leave the EU on March 29 without a withdrawal agreement. This exit would be immediate, with no transition period. People are concerned about the chaos this could cause.

Because the Brexit negotiations have been anything but smooth, and politicians within the U.K. can’t agree, the deadline may be pushed back. But this will only happen if the U.K. parliament votes to effectively postpone Brexit by seeking a limited extension to Article 50 and there’s no word on any of that. Yet.

What questions do you have?