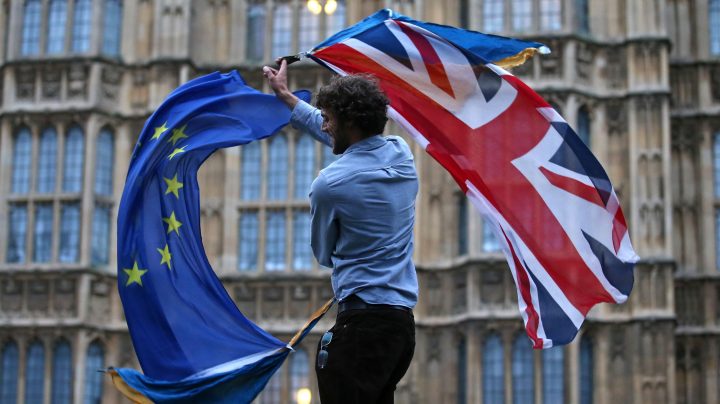 COPY
Outside the Houses of Parliament, a man waves flags at an anti-Brexit protest in London. Justin Tallis/AFP/Getty Images
Brexit

Outside the Houses of Parliament, a man waves flags at an anti-Brexit protest in London. Justin Tallis/AFP/Getty Images
Listen Now

The clock is ticking on Brexit.

Oct. 31, 2019, is the deadline for Great Britain to leave the European Union. British Prime Minister Boris Johnson has promised to leave, even if a trade deal can’t be reached with the union. Leaving without a deal could send the British economy into chaos and Johnson would be defying a new parliamentary law that requires a trade agreement with the EU.

Reporter Joe Mayes recently imagined what could happen on the first day of a no-deal Brexit. For Bloomberg Businessweek, Mayes and his colleagues interviewed British workers about their jobs and what could happen to them in a post-Brexit economy. He spoke with “Marketplace” host Kai Ryssdal about his reporting.