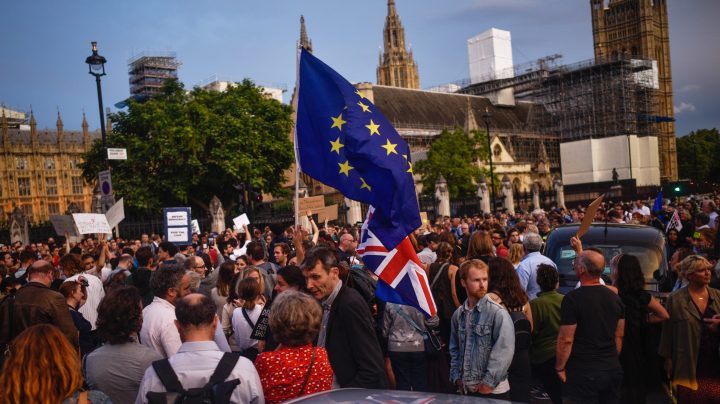 It’s been a big week for Brexit.

The queen gave the green light for the government, led by Prime Minister Boris Johnson, to suspend parliament after members return from summer recess from early September until Oct. 14. That’s just two weeks before Brexit.

The decision sparked outrage, support, a drop in the value of the British pound, and confusion.

If you’re in the latter camp, you’re in luck: On Thursday’s global edition of Marketplace Morning Report, the BBC’s Victoria Craig chatted with the British broadcaster’s U.K. political corespondent, Jonathan Blake about what’s going on, how it changes the Brexit timeline, and what the queen has to do with it all.

Victoria Craig: First of all, why did Queen Elizabeth have to get involved in this process?

Jonathan Blake: Well, the queen has a constitutional role as the monarch: it is her government and any decision that the government takes has to have the queen’s approval. But because of the way the constitution works, she never gets involved in the political decisions that are being made or is ever seen to pass judgement on what is happening. It’s, effectively, a royal rubber stamp on new laws that are passed and the decisions that the government has made.

Craig: So what is this suspension of parliament mean for the Brexit process? Does it make a no deal more likely?

Blake: Well, in reality it doesn’t actually make too much of a difference to what was going to be happening here at Westminster because MPs were going to be on a break during September. So there was very little time available to MPs to try to stop the government taking the U.K. out of the EU without a deal — either by bringing down the government in a vote of no confidence, or forcing them to ask for an extension to the process from the EU. There is now even less time for MPs to do that.

Craig: We’ve heard a lot of rumblings about a potential vote of no confidence. How likely is that and what happens if that passes?

Blake: It’s likely. You had the leader of the opposition Labor Party saying, in the hours after this decision was announced by the prime minister, that he would push for a vote of no confidence so when MPs get back from their summer break next week we’ll see a period of a week or so where they have a window to do that. If the government loses that vote, there is then a two week period which is triggered and if the prime minister or anyone else is able to demonstrate that they can form a government that they can command a majority of MPs in the House of Commons, then they would go to the queen, form new government and take things from there. That could be the leader of the opposition, Jeremy Corbyn, as a temporary prime minister who would then call the general election at some point in the near future. If a government can’t be formed, a general election would then happen by default. But crucially the prime minister gets to set the date of that and Downing Street had made it clear that they’d be willing to set it for after the Brexit deadline. So general election or not, we’d come out of the EU on Oct. 31 regardless.

Craig: So, a general election doesn’t necessarily mean there will be another referendum on Brexit?

Blake: No, it doesn’t because it all comes down to when the election is held. And it’s looking likely that that will be after the Brexit deadline because there really isn’t time and nobody really wants one before the Brexit deadline. So if and when there’s a general election, it’s likely that the U.K. would have left the EU one way or another, either without a deal and the consequences of that would have followed or with a deal, in which case the prime minister would probably be tempted to say, “Look, I’ve got us out. I’ve got a better deal than my predecessor, back me to form a new government.” And he’ll try to increase his majority that way.

Craig: Stepping away slightly from politics for a minute. We’ve seen reaction in the financial markets just yesterday when this decision to suspend parliament was announced, the pound fell about a percent. And we’ve heard a lot from business groups in the last two years warning about the economic impact of a no deal. Is anyone in that building behind you in parliament, are they listening to the business groups?

Blake: Oh, I think they are. Certainly on the government side, they would absolutely make the case that the uncertainty that businesses have raised concerns about is one reason why the Brexit process shouldn’t be delayed any further and the U.K. should come out of the EU on the current deadline of the 31st of October. Others in the opposition parties who are set against leaving without a deal almost make the same argument from a different point of view. They say, well, businesses kind of have the uncertainty and deal with the economic impact that they say would follow from leaving the EU without a deal. And that’s why we need a better deal and we need to stay in longer to negotiate that. So yes, they’re listening. But I would say that they’re probably interpreting those concerns that businesses have in different ways.

Craig: Many of our listeners might be comparing what’s happening here to Congress shutting down for a period of time. If members of parliament aren’t here, work can’t be done. So aside from Brexit, the biggest issue of the day, what other issues maybe are getting pushed to the back burner during this suspension?

Blake: Well, this is one reason why the government wants to have a Queen’s Speech, as it’s called, which is where they set out their legislative agenda, the plans they want to get through and the laws they want to change, the money they want to spend for the year ahead. Brexit has taken up so much time and parliamentary energy that there really isn’t anything left. And the new prime minister, and the new government haven’t yet had a chance to put forward their plans in detail for the things they want to do and try to get MPS to vote them through. Because you have this big blockage of Brexit in the way, and until that’s sorted, there won’t be the time or the capacity in parliament to do much else. But it is a frustration for a lot of people here at Westminster that whilst Brexit is taking up so much time and energy, that other things, the domestic agenda, so police, schools, hospitals, local council funding, all kinds of things are being neglected and left on the back burner until Brexit is sorted.