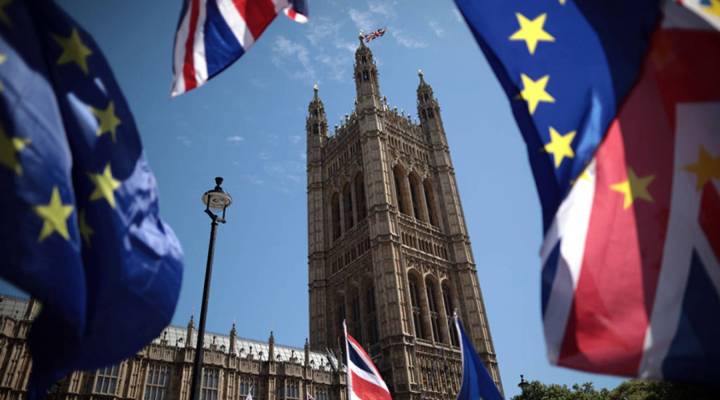 EU and Union Jack flags are waved as anti-Brexit demonstrators gather outside the Houses of Parliament on June 11, 2018, in London. Dan Kitwood/Getty Images
Brexit

EU and Union Jack flags are waved as anti-Brexit demonstrators gather outside the Houses of Parliament on June 11, 2018, in London. Dan Kitwood/Getty Images

It’s been nearly three years since the United Kingdom voted to exit the European Union, and, to the amazement of many, it’s not much closer to actually doing so.

After the failure of successive departure deals, the U.K. voted to delay the original March 29 deadline and the EU granted an extension. Marketplace is in England this week to report on an ever-developing situation that can be hard to make sense of.

But maybe Brexit has always been hard for people to make sense of. According to Ros Atkins, host of the BBC’s current affairs show “Outside Source,” there was “no coherence among those who supported Brexit as to the kind of Brexit that they wanted,” even as they voted for it.

Brexit’s effects will ripple beyond Europe. Ahead of the Marketplace trip to Britain, Make Me Smart hosts Kai Ryssdal and Molly Wood got on the phone with Atkins to tease out some of Brexit’s most central themes.

The Europewide cooperation that led to the establishment of the EU started in 1945. As the bond between the U.K. and the rest of Europe evolved and deepened, the U.K. held and passed a referendum vote in 1975 to join what was then known as the European Economic Community.

Until 2016, there was no plan in place to leave the EU, Atkins said. In 2013, former Prime Minister David Cameron promised a referendum on EU membership if his Conservative Party was re-elected in 2015. You know the rest.

Emotion played a big role in the Brexit vote

The 2016 vote was not entirely motivated by rational economic interest, Atkins said. Concerns about freedom of movement across the European bloc, immigration, globalization and a general distrust of politicians all played a role in the referendum vote.

Brexit, as Atkins described it, was a “chance to just put a v-sign up at the political establishment.” If you’re wondering, the “v-sign” in the U.K. is a version of giving somebody the finger.

There’s a lot at stake for British economy

A soft Brexit, Atkins said, could result in some continued alignment with the EU — Britain could remain in both the single market and the customs union.

In the case of a hard Brexit, one with no special arrangements in place, the Bank of England has estimated a sharp downturn in the British economy, as well as a 30 percent drop in house prices.

The ripple effects could be global

The world “has never seen an economy of this scale drop out of union on the scale of the European Union with absolutely no arrangements in place,” Atkins told Marketplace.

Brexit’s effects aren’t practical but existential, Atkins said. After World War II, the EU represented a new cooperative ideal. Today, he said, the Brexit vote could lead to a “fundamental failure in the way politics is working in Europe.” “If it can fail in Europe,” Atkins said, “it can fail anywhere.”