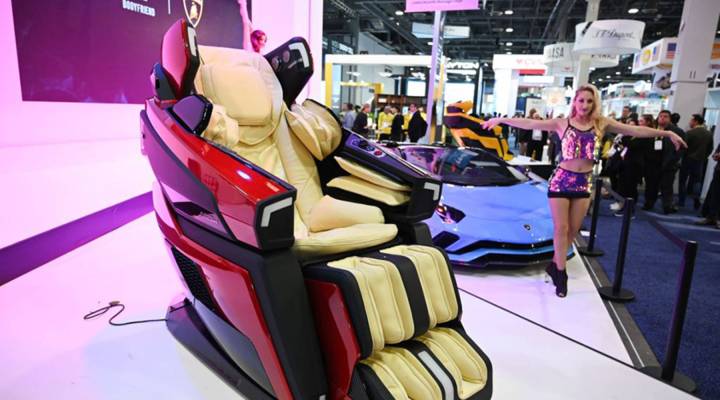 A dancer performs at the Lamborghini massage chair display at CES 2019 at the Las Vegas Convention Center. ROBYN BECK/AFP/Getty Images

On my first day in Las Vegas for CES 2019, the world’s biggest tech extravaganza, I called down to the front desk of my hotel for a razor.

A few minutes later, someone knocked at my door and handed me the hotel’s standard “shaving kit.” It contained a disposable razor and a tube of shaving cream — heavily scented men’s shaving cream.

I thought, you know, if society is going to tell me that I have to have stubble-free legs and hairless armpits, could it at least acknowledge that I might want gender-neutral shaving cream? I muttered something to myself about a thousand tiny cuts of sexism, and, smelling like some weird combination of Old Spice and Axe Body Spray, I headed off to see IBM CEO Ginni Rometty kick off the tech show with her opening keynote.

The Consumer Technology Association had proudly announced that four of its nine keynote speakers in 2019 would be women. The year before, the CTA had hastily added two women to keynote panels after drawing criticism for an all-male selection of speakers that also only included one person of color.

In the seven years before 2018, CES had had only three female keynoters.

Things were looking up, though, it seemed. CTA President and CEO Gary Shapiro introduced Rometty on Monday morning, and as he opened the show he announced that CTA had set up a $10 million investment in venture firms that fund startups headed by women and other underrepresented founders. Rometty, by the way, was fantastic.

So I went about my CES business, and I was excited. Our senior producer on Marketplace Tech, Eve Troeh, had never been, so on Tuesday, the day that the show floor opened at the Las Vegas Convention Center, we made a point to check it out in earnest, trying on virtual reality headsets and holographic experiences and checking out all the wild and woolly car tech in the North Hall, which is devoted to auto tech, audio and aftermarket car gear.

We were having a grand time, and I was Instagramming the whole thing, in a happy little geek haze. And then we came across this giant yacht in the middle of the North Hall and it featured what at first I thought must be an illusion: two young women in skintight white ballgowns posing for photos with a photographer, handing out booties to people going up to see the yachts and fending off conference attendees wanting to pose with them.

It’s 2019 and there are still booth babes at #CES2019 so that’s nice. Guess they figure only guys come to the North Hall because CARS! pic.twitter.com/2WUOYwa8hC

I heard a woman next to me mutter, “Those poor girls,” and saw her walk away, and I said to Eve, “Oh, my God, there are booth babes here. In 2019.” And I felt sort of sick. I guess on the plus side, it’s enough of a rarity that I was actually shocked, and I snapped a quick photo.

Here’s a fun fact for you: According to an Atlantic piece from 2013, when CES was embroiled in controversy about whether to officially ban booth babes (it hasn’t), the magazine reported that the first time it could find the term “booth babe” in print was in a 1986 story in the Toronto Star about … a CES event.

Only a few minutes after the encounter at the yacht booth (I confess, I was still ranting about the booth babes), we visited the CES Innovation Hall, where all the products that the CTA has given Innovation Awards are on display. Some are amazing, some are delightfully quirky (an electric skateboard, a life companion for pets, a mysteriously tiny drone car), and some are potentially life-changing, like the Volo Beauty cordless hair dryer that also doesn’t fry your hair.

And as Eve and I inched our way through the crowd toward the hair dryer, a man coming toward me looked down at it and said dismissively, “A hair dryer? Really important tech.”

I gave him a hard stare and said loudly, “For some of us.” He didn’t notice, but the guy with him looked a little chastened.

Lol not even making this up. Looking at this wireless hair dryer, which is next to a “life companion for dogs” and who knows what else random stuff and a guy next to me says loudly, “a hair dryer? Important tech.” #meta pic.twitter.com/66Grhp82Tv

Poor Eve. Now the ranting really started. For the rest of the afternoon, I felt angry and demoralized. I tweeted about the booth babes, and people responded to me with pictures and videos from other booths — dancing girls promoting the Lamborghini massage chair and some in a TV booth in the Central Hall.

The award was originally in the robotics category, but in October, the CTA emailed the company and said it had disqualified the sex toy for being “immoral, obscene, indecent, profane or not in keeping with CTA’s image.” It also told the company it couldn’t exhibit at the show.

The CTA told us in a statement that the product should never have been considered, as it has no category for sex toys. The company responded that it’s filed eight patents for micro-robotics related to the product, five in conjunction with Oregon State University, and started a Twitter campaign accusing CES of a double standard and gender bias.

I stayed in Tuesday night, and I thought about all the parties that were happening all over Las Vegas that night. I thought about all the drinking and the potential for unwelcome encounters, and I wondered how many of the party organizers had also hired women in barely-there clothes to pass out drinks or entertain patrons, as I’ve often seen at CES parties, or just to make the male-dominated events seem less male dominated — that happens back in Silicon Valley, after all.

Wednesday was my last day at CES, and the enthusiasm of the first two days was basically gone. I felt drained and sad and frustrated. This was my 18th CES. Next year will be my 20th anniversary covering tech as a journalist. I can’t say we haven’t made any progress in that time, but I’m disappointed we haven’t come further. Technology is part of all of our lives. I hope there’s a day when CES truly feels like it’s for all of us.

For Marketplace Tech, Molly spoke with CNN tech reporter Heather Kelly, who was also at CES, about gender bias at the conference this year. You can find that interview here.