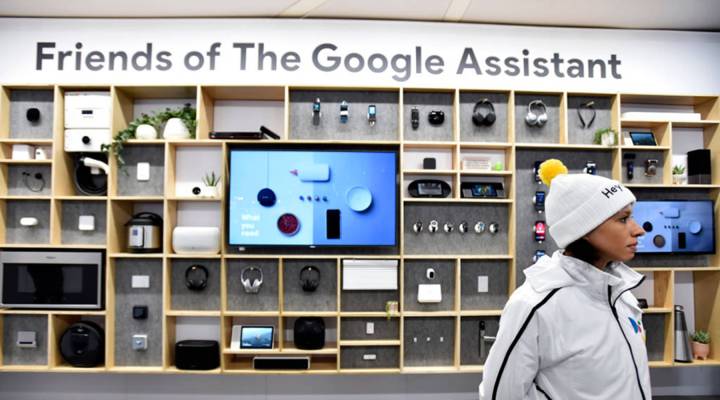 A Google representative watches over a display of Google Assistant products at the at CES 2019 at the Las Vegas Convention Center on Jan. 8. David Becker/Getty Images
Marketplace Tech Blogs

A Google representative watches over a display of Google Assistant products at the at CES 2019 at the Las Vegas Convention Center on Jan. 8. David Becker/Getty Images

CES is here. Tech heads from around the world have landed in Las Vegas for the largest big-gadget, media and entertainment tech show, and our own Molly Wood is on the ground. You can check out the second part of her Marketplace Tech dispatch below.

The CES show floor opened on Tuesday, which is also when everyone flew into Vegas, and we’re now into miles and miles of walking (and also: huge ridiculous booths, extravaganzas, plus the realization that two small humans, me and senior producer Eve, probably can’t visit all of the 4,500 exhibitors.)

But! Some things that are happening around Vegas:

Mercedes is shuttling people around in an electric, autonomous car that looks as if it’s straight out of “Tron.”

Pretty cool new Mercedes, the multi-purpose Vision Ubernetic… it might be your next, well, Uber, or maybe it will deliver your next Amazon order! Fully autonomously, of course. #CES2019 #CES pic.twitter.com/1Cy41VWakE

You can watch Disney Marvel stuff inside an Audi e-tron, and the company is sure that only passengers in the car are going to use it.

On the newsier side of things, remember yesterday when we told you Apple was showing up at CES by partnering with companies for smart home devices?

Well, Google is also out here trying to kick Amazon and Alexa to the curb. On Tuesday, the company announced that you can now control a bunch of products using Google Assistant, like a smart sprinkler system, some smart lights, outlets and televisions. And also apparently a smart mirror!

I also checked out the CES show floor because from what I hear there are lots of smart mirrors and it’s basically all I’ve ever wanted — it’s essentially a bathroom mirror that tells me the weather, news updates and the important basics while I’m brushing my teeth and fixing my hair. And if that reality is here now? Then I am in.

For updates and photos from CES 2019, check out Molly Wood’s Instagram. To read her first dispatch from CES, click here.