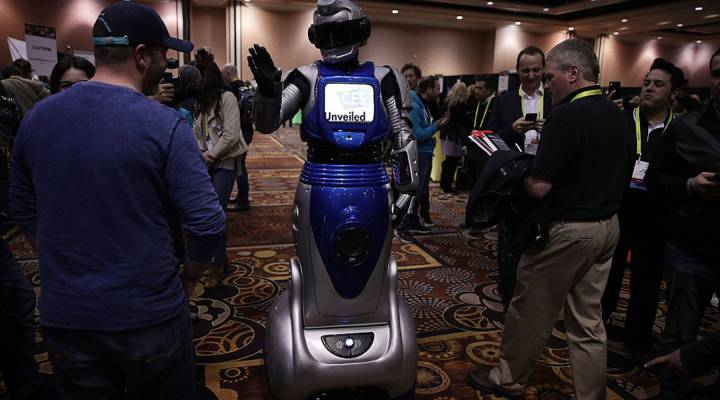 COPY
A robotic figure interacts with members of the media during a press event for CES 2017 at the Mandalay Bay Convention Center on January 3, 2017 in Las Vegas, Nevada.  Alex Wong/Getty Images

A robotic figure interacts with members of the media during a press event for CES 2017 at the Mandalay Bay Convention Center on January 3, 2017 in Las Vegas, Nevada.  Alex Wong/Getty Images
Listen Now

CES draws over 170,000 people to Las Vegas annually to view the latest innovations in tech. It’s billed as the world’s largest tech trade show — about 400,000 companies will show off their latest products. This year, robotics, virtual reality, and smart home devices are among some of the most anticipated devices.

On the significance of CES:

CES used to be called the Consumer Electronics Show, now it’s just plain CES. And increasingly, it’s a show where people come to not just look at what is going to be the big tech trend for the coming year, but also make deals. It’s a big media show, there are a lot of international attendees, even the companies that don’t officially exhibit like Amazon and Apple and Google have some sort of presence here. And there are so many startups that even venture capitalists are starting to come.

How the tech industry is gearing up for the presidential transition:

The Consumer Technology Association is the non-profit trade group that puts on CES, and it is fundamentally a lobbying group. They’re based in Washington, they lobby on behalf of the tech industry, they try to promote innovation as a business trade association, but also as a political arm. And so, the questions of policy that are raised by an incoming administration are huge. The FCC is always a big topic of conversation here. I talked to Gary Shapiro, he’s the CEO of the CTA, and he said that the tech industry is feeling positive about some things. Obviously, everyone feels excited about investment in infrastructure — you can imagine the tech industry is gonna push for tech-based infrastructure investment — the change in the tax rate, some sort of positive immigration changes, potentially. But, he said there were are also worries.