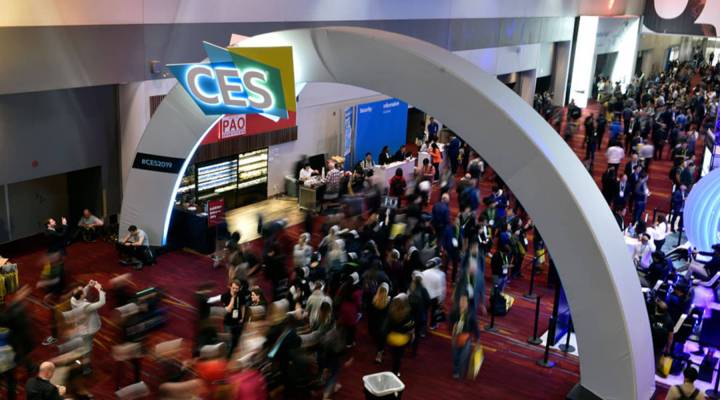 Attendees walk along during CES 2019 at the Las Vegas Convention Center on January 8, 2019 in Las Vegas, Nevada. David Becker/Getty Images

CES is here. Tech heads from around the world have landed in Las Vegas for the largest big-gadget, media and entertainment tech show, and our own Molly Wood is on the ground. You can check out the first part of her Marketplace Tech dispatch below.

CES is still trying to find its way into the post-gadget future and it’s going a little slowly, as we try to figure out whether consumer electronics really matter anymore in comparison to the cloud, social media and the all-powerful smartphone.

But then again, things always start out a little quirky at CES: things like a bread-making vending machine, huggable robotic pillows and wearables of questionable usefulness. Even electric skateboards with neon lights on them that companies hope you’ll buy instead of taking scooters.

My time at CES started off on Sunday night at CES Unveiled, which is sort of like the press kick-off. There are different exhibitors and — full disclosure — some bars and some free food, but that’s not why I’m here. I’m here to understand what’s going on with a skateboard from Walnutt Tech that I saw. It apparently can go as fast as 35 kilometers per hour, according to a representative from their company.

Walnut Tech’s Spectra electric skateboard is displayed during a press event for CES 2019 at the Mandalay Bay Convention Center on January 6, 2019 in Las Vegas, Nevada.

I also joined the folks at Hypervsn, looking at their integrated 3D holographic display system. According to a representative with the company its uses are endless and can be “used for anything that you can kind of dream of.”

I also talked to Colin Crook, a representative from Astrocast, a company that has created “a network of nanosatellites for the IoT industry.”

Crook: Basically, what we do is our transmitter goes into fresh purification water systems in very remote locations on the planet. So if [a water purification system] breaks down or the water becomes de-purified, then that sends a signal to our satellite in a low orbit which sends another signal to the water purification company and then they go fix it in a matter of a couple of days. So that would have taken two months [before].

Wood: So I have to say though, when you first said all of that, the nanosatellites for IoT, I definitely did not think you were going to go to water purification. That’s a very specific thing.

Crook: Yes, it is. So I think one thing we’ve all seen in IoT and Alphabet and Amazon and companies like that are working on, which is bringing cellular coverage to people in remote places like the Upper Peninsula of Michigan. That’s all kind of noble so that they can stream videos on Facebook and stuff, but I think that the sort of next evolution of IoT or what IoT’s promise really is is fixing human problems and allowing machines to do that and talk to one another. So, you know that’s really expensive over cellular networks and is very expensive over traditional satellite networks. But we’re hoping to make that very cost effective. And so that all the Space X launches aren’t just rockets going into the orbit. They’re actually putting things up there that will benefit real human beings.

Now, I feel obliged to point out that bringing people internet access from space is also about closing the digital divide so that folks can have greater economic and educational opportunity, not just so they can stream. But clean water is also good.

Monday is press day at CES, so the whole day is a series of press conferences from big names like LG, Toyota, Qualcomm, Samsung and Intel. Big announcements included LG’s roll-up TV screen, which rolls itself down into a little console so it doesn’t bother you with its bigness in your modern cool living room.

In other news, Apple doesn’t usually come to CES at all, but the company did announce a bunch of new internet of things partnerships, which shows that it’s finally getting serious about its HomeKit platform. Things like smart plugs to locks to lights to doorbells might be the actual new gadget frontier?

But speaking of the new frontier, there was also a preview of the potentially inevitable robot wars of the future in Las Vegas, Monday. A company called Promobot announced that one of its robots was hit by a self-driving Tesla Model 3 … and did not survive the incident.

It’s not funny you guys, that robot was expensive and now it can’t do CES at all. But the video is amazing.