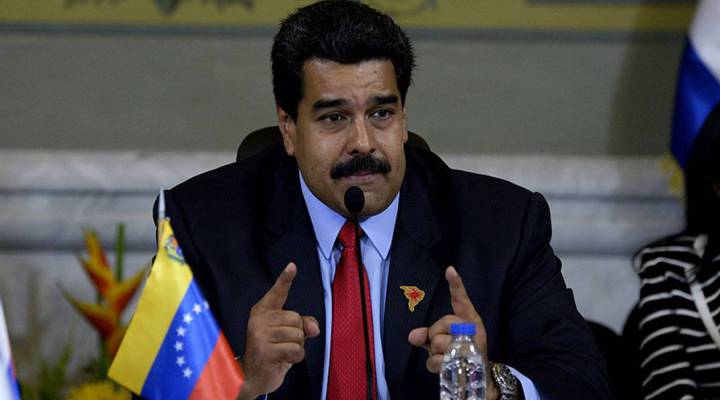 Venezuelan President Nicolas Maduro delivers a speech during the ALBA Summit at the Miraflores Palace, in Caracas on March 17, 2015. FEDERICO PARRA/AFP/Getty Images

Venezuelan President Nicolas Maduro delivers a speech during the ALBA Summit at the Miraflores Palace, in Caracas on March 17, 2015. FEDERICO PARRA/AFP/Getty Images

When Maduro first took office in 2013, the country was troubled by weak growth, debt and falling oil prices. During that time, the country’s economy was growing at a rate of 1.3 percent, and roughly one-third of the country’s population lived below the poverty line. That same year, the country’s oil revenues totaled more than $85 billion – about 98 percent of the country’s annual export earnings.

Today, the economy in the South American country is shattered. Forecasts for this year are predicting an expected contraction of 18 percent.

Since the economic shift in Venezuela, up to 5 million Venezuelans are estimated to have left the country, while inflation in the nation hovers around 1 million percent.

This economic shift comes months after the country issued a new form of currency to manage growing inflation.

The new currency, now known as the “bolivar soberano” – the sovereign bolivar – is worth 100,000 of the old Bolivares. Since then, the bolivar has lost “95 percent of its value against the dollar” The Economist reported. In August 2018, a whole chicken costed approximately 14.6 million bolivars, while a roll of toilet paper sold for 2.6 million bolivars.

According to a UN report, about 90 percent of the population lives in poverty. The country’s oil revenue is at its lowest in three decades.

Julia Buxton, a professor of Comparative Politics at Swansea University in the United Kingdom said a second Maduro term does not offer hope.

“There is a huge subsidy on the price of domestic gasoline – cheapest in the world – and this really benefits the wealth classes,” Buxton said. “But the government has simply not had the appetite to address some of these crushing contradictions in its own economic strategy.”

The United States Treasury Department announced Tuesday they would be imposing sanctions on figures close to President Maduro, Reuters reports. Sanctions, according to the American treasury, will target a Venezuelan currency exchange network scheme.