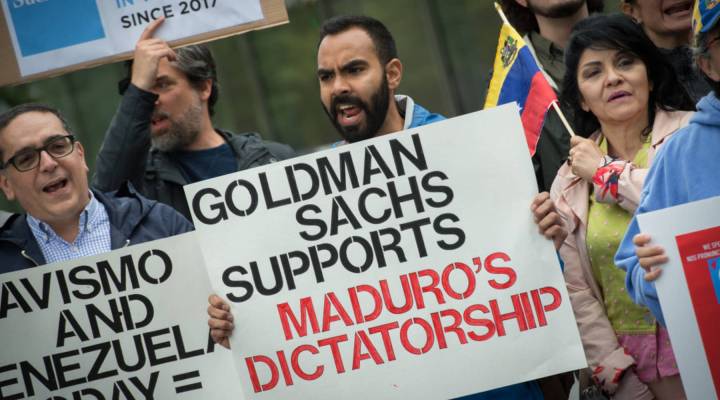 Why are people mad at Goldman Sachs this time?

Last week, Goldman Sachs purchased about $2.8 billion worth of Venezuelan bonds. According to reports by the Wall Street Journal, the company paid 31 cents on the dollar, or about $865 million, for bonds issued by state oil company Petróleos de Venezuela SA. The bonds were issued in 2014 and are set to mature in 2022.

Since the purchase became public, Goldman has been subject to criticism for funding a dictatorship that has let its own people starve.

How bad are things in Venezuela?

Venezuela is currently dealing with critical food and medicine shortages. Since 2013, its economy has shrunk 27 percent and its food imports have dropped by 70 percent, the Wall Street Journal reported earlier this year. About 75 percent of Venezuelans lost an average of 19 pounds last year, according to the National Poll of Living Conditions.

Furthermore, Venezuela is likely to see an inflation rate of 720 percent this year, according to estimates by the International Monetary Fund.

What do the bonds have to do with this?

According to the two dozen protesters who gathered outside the bank’s headquarters in New York, by purchasing the bonds, Goldman is supporting the current government led by Venezuelan President Nicolas Maduro.

“By giving $900 million to a dictatorship, they are funding a systematic human rights violator, they are funding immorality and for Maduro to stay in power while he keeps killing people,” Eduardo Lugo, 23, a Venezuelan attending college in New York and a leader of the protest, told Reuters.

Goldman Sachs has pointed out that the bonds it has purchased were bought on a secondary market and not from the government. Its critics say that makes little to no difference.

“The bondholders know that they’re being paid at the expense of the country’s hunger,” Jorge Botti, a Venezuelan businessman, told Bloomberg. According the Bloomberg report, Botti was the one who originally described the Venezuelan bonds as “hunger bonds” in a tweet sent last year. “A lot of people tell me that the bonds don’t have anything to do with people, but I tell them it’s a moral issue.”

If Venezuela is not doing well economically, why is Goldman Sachs buying its bonds?

“We recognize that the situation is complex and evolving and that Venezuela is in crisis. We agree that life there has to get better, and we made the investment in part because we believe it will.”

There is another reason such bonds are attractive: They tend to come with a government guarantee, and the bondholders who are playing the long game could make significant profit on their investment.

“As unpalatable as holding Venezuela risk may seem, this is precisely the type of time that long-term investors typically want to accumulate exposure,” Mike Conelius, portfolio manager for the T. Rowe Price Emerging Markets Bond Fund, told the Wall Street Journal. According to him, the country is likely to go through a regime change that would result in an economic recovery.

That’s not to say that Goldman’s investment is without a risk.

Members of the opposition party have threatened not to honor the bonds or do business with Goldman Sachs if they do come into power.

“It is apparent Goldman Sachs decided to make a quick buck off the suffering of the Venezuelan people,” Julio Borges, head of Venezuela’s opposition-controlled congress, wrote in a public letter to Goldman Sachs CEO Lloyd Blankfein. “I also intend to recommend to any future democratic government of Venezuela not to recognize or pay on these bonds.”

Angel Alvarado, another opposition lawmaker who is a member of the country’s congressional finance committee, said that Goldman was making “a grave reputational error.”

“This is a bad decision not just from the ethical, but also from the business perspective,” he told the Wall Street Journal.