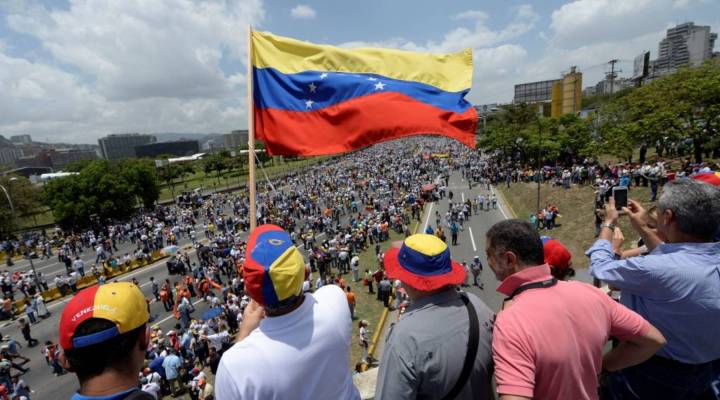 In the past couple of weeks, tens of thousands of people have taken to the streets to protest Venezuelan President Nicolas Maduro’s government, and, by extension, the dismal state of the economy. Daniel Gallas, the BBC’s South America business correspondent, talked with Marketplace host Kai Ryssdal about the cause of the riots in Venezuela. The following is an edited transcript of their conversation.

Kai Ryssdal: So these riots have been going on now in Venezuela for weeks at least. Is it the economy? Is it something else? What’s going on?

Daniel Gallas: Well, it’s the economy a lot, but it’s also politics, too. You have a war going on between the Congress and the president. And on top of that, you’re seeing the worst economic recession probably in the world. It’s a country with 800 percent inflation. There are no goods in the shops. Purchasing power is down. There are four different exchange rates. So, [it’s] an economic mess and institutions are not able to move around it.

Ryssdal: How are people getting by then? I mean, I imagine you can’t line up at stores for goods that aren’t there, so what are people doing? Is that a barter economy now? Is it effectively all black market?

Gallas: Well, people have the choice of going to a supermarket that’s sponsored by the government, and the government has a list of prices that these institutions have to sell their goods to. But the problem is that there is too much demand. So, people just queue up for those products. The alternative is to go to the black market, which is literally the streets. The bachaqueros is what they’re called, which are the people who buy these goods either in the black market or in the official stores, and they sell it for a lot more expensive prices. That’s a pretty bad situation in terms of food and more seriously medication for hospitals.

Ryssdal: I saw on the wire services, as I was coming into the studio to speak with you, that for the first time, the extremely poor in Venezuela, the people who live in the slums of Caracas in the big cities, have turned against the government now. They’ve come out protesting the government, which they had previously supported in the past.

Gallas: Yes. We’ve seen a change in allegiance. A lot more people today are blaming Maduro. Maduro, for a while, he had sort of a good popularity with people, because he was seen as the successor to Chavez. Chavez ruled Venezuela in very different times, when the barrel of oil, which is sort of the lifeline of the Venezuelan economy, was very high globally and that actually sponsored a lot of change in people’s lives. So people loved Chavez, but that did not sustain itself. The problem is that Venezuelans have been protesting for the past few years, but that has done very little to change things at the top.

Ryssdal: Talk to me for a second about what could change things, then. I imagine that thing No. 1 on that list is a sharp increase in the price of oil.

Gallas: Sharp increase in the price of oil would change the situation on the ground. Another thing that hasn’t worked and what people put a lot of hope is international mediation. But probably elections are a what could trigger a response.

Ryssdal: And the election is next year, right? And does he hold on till then, do you think?

Gallas: Maduro has managed to sort of stop all of the referendums. But the way the economy has been for such a long period, it’s hard to see him actually holding onto power for this long.