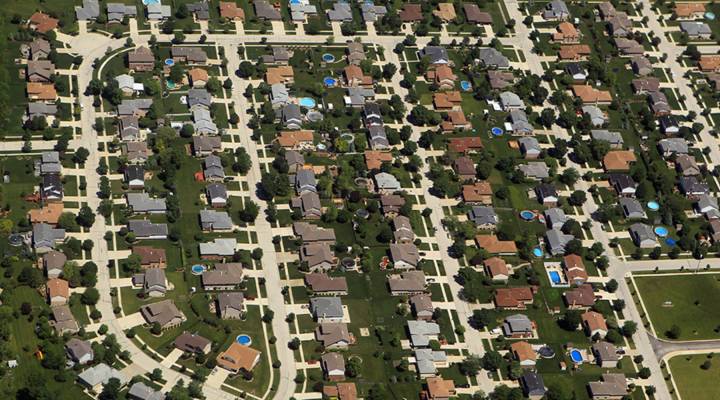 There are now more renters than homeowners in almost half of major U.S. cities, according to census data from 2006 through 2016. Above, a residential area near Pittsburgh in 2010. Bruce Bennett/Getty Images
Divided Decade

There are now more renters than homeowners in almost half of major U.S. cities, according to census data from 2006 through 2016. Above, a residential area near Pittsburgh in 2010. Bruce Bennett/Getty Images

Ten years ago, the economy broke, and today America is a much different place. For the past year, Marketplace has been reporting on how the 2008 financial crisis changed the country. Here is what we’ve learned about how it changed housing.

Nearly 10 million homeowners lost their homes to foreclosure sales in the U.S. between 2006 and 2014. The effects of the subprime mortgage crisis are not only still being felt today, they have indelibly changed the way Americans view homeownership and the way we live.

We are becoming a nation of renters

Marketplace and APM Research Lab gathered census data from 2006 through 2016 (the most recent available) on every city in the country with more than 150,000 residents (there are 173 of them). Here’s what we found:

There are now more renters than homeowners in almost half of major cities — 47 percent. That’s up from 21 percent in 2006.

In that 10-year span, not a single city saw a statistically significant decline in households that rent, and many saw double-digit increases.

But wasn’t the housing crisis about too many people buying homes they couldn’t afford? Are we just getting back to a more stable homeownership level?The percentage of households that are owner occupied has fallen five points since before the crisis, from 69 to 64 percent. That indicates there are 7.3 million more households renting today than a decade ago.

Marketplace’s Amy Scott tackled these questions, and experts told her predatory lending was overwhelmingly the cause, not people overreaching.

Emily and Alfredo Cervantes, for example, bought a townhouse in Denver in 2002, covering their bills without a problem until the market collapsed in 2007 and their adjustable-rate mortgage payments doubled.

Emily and Alfredo Cervantes, both 37, rent this home with their daughters Mikayla, left, 14, and Izel, 9.

From housing bust to housing shortage

Less than a third of families who lost homes to foreclosure in the past decade will return to homeownership, according to the National Association of Realtors. The experience damaged credit ratings and psyches. There is even a term for the mental toll the crisis took: “post-foreclosure stress disorder.”

Increased lending standards have also reduced homeownership. Laurie Goodman, the co-director of the Urban Institute’s Housing Finance Policy Center estimates that 6 million more people could have sustained homeownership over the past few years but couldn’t get mortgages.

In the meantime, median home prices nationwide are up more than 50 percent since bottoming out during the Great Recession, which means the housing bust of the last decade has given way to a new crisis for many families — one of affordability. Home affordability recently dropped to its lowest level since 2008.

All of this has transpired over a time when student loan debt in America has more than doubled, now totaling $1.5 billion. That may help explain why the homeownership rate among millennials is at roughly 35 percent, lower than any other generation of young adults in the last 50 years. It certainly isn’t a choice.

Our own Marketplace-Edison Research Poll showed that around 75 percent of 18- to 24-year-olds say owning a home is still an important goal for them.

The effect of the crisis could last for generations

Owning a home is the primary way families build wealth to secure their retirement and pass on money to their children, which means the decline in homeownership could have effects that last for generations.

This is particularly concerning because of who was hit hardest by the foreclosure crisis.

“The homeownership rate for blacks today sits at exactly the same place as it was when the Fair Housing Act was passed 60 years ago” — Alanna McCargo, vice president of housing finance policy at the Urban Institute

That means that when it comes to homeownership, black families are no better off today than they were when housing discrimination was legal.

Our Marketplace-Edison Poll found that people of color were much more worried about a future recession. (Explore the trends in black homeownership for all major cities.)

Ten years after the market collapsed, there are also still more than 5 million homes that are seriously underwater. That means even though foreclosures hit their lowest level in a decade this year, more than 9 percent of American homeowners are still in peril.

The rise of rent-to-own

“Subprime” may largely be a term of the past, but where there is a market, there will be a product. In the wake of the foreclosure crisis, a different crop of “alternative” home-purchase schemes have spread through housing in the past few years, promising people who don’t qualify for traditional mortgages a way in.

Some are called “rent-to-own” deals, and our reporting found that many of these deals come with the responsibilities of homeownership without many of the benefits. Would-be homeowners are often saddled with costly repairs and property taxes but can face eviction like traditional renters.

The house Maureen Seymour has been trying to buy could be condemned by the city South Euclid, Ohio, and demolished, along with her $25,000 investment.

While rent-to-own housing doesn’t threaten the economy writ large, the way the subprime crisis did, it can threaten the personal economies of families on the brink.

Design on a dime

Our reporting also found evidence that our houses actually look different because of the recession. Many people scaled back and learned to live smaller, and that shift has remained throughout the recovery. Experts told us that “reworking” trends replaced remodeling trends, people are investing more in home offices than entertainment spaces, and today’s most popular decor features simpler, cheaper designs.

The recession even had an official color, and it’s here to stay:

“In about 2008 and 2009, we started to see the rise of the color gray. … People might be preparing to sell a house, so they were looking at these very safe, kind of conservative colors that were easy to decorate around. It’s a macro trend that’s really lasted the past ten years” — Erika Woelfel, vice president of color and creative services at Behr Paint