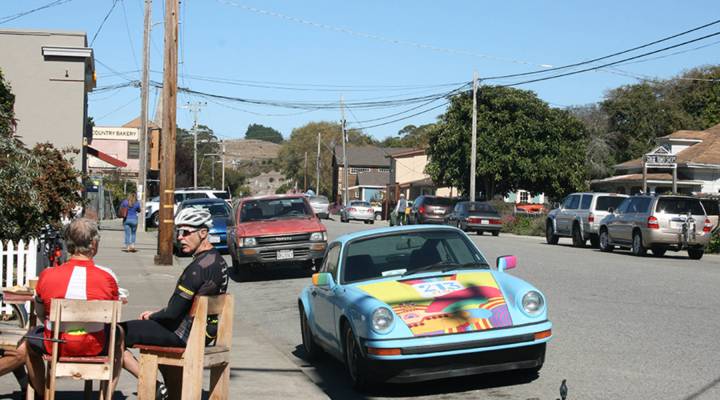 California offers some of the starkest examples of income inequality in the U.S. It has some of the nation’s highest personal incomes, but also its highest poverty rate.

Both sides come face-to-face in San Mateo County, sandwiched between San Francisco and Silicon Valley. It is one of the richest counties in California, but it is also home to one of the state’s poorest towns: Pescadero, with a population of around 1,700. It is only about 20 miles from the heart of the tech industry, but by just about every other measure, it is a world away. With its wooded hills and open fields perched above the Pacific Ocean, Pescadero has a rustic beauty that seems like a throwback to a forgotten time. It is no wonder that some Silicon Valley executives have homes and ranches here. On weekends, tourists flock to the quaint downtown, hike and mountain bike on the local trails, or take in the spectacular vistas along the coast.

“Once you start getting a little bit out of the downtown area, I think that’s when you start seeing some of the reality for other people,” said Rita Mancera, a 13-year resident and the executive director of Puente de la Costa Sur, a non-profit organization that provides social services to the community.

There has been little development in Pescadero for decades. Most of the jobs are in the farm fields that surround the town. Mancera makes a point of taking visitors — including potential donors — on what she calls her “reality tour.” It includes some of the decrepit housing for the farm workers.

“Now look at this. I mean really. Seriously,” Mancera said as she drove us past a trailer — clearly occupied, but with no windows intact.

Local residents say that efforts to protect the region’s open space are starving their community of resources.

The poverty also extends to the local school district, which is short on tax revenue. Pescadero High School, with an enrollment of about 100, has no safe drinking water because the well is contaminated. Students and staff drink bottled water, which is also what cafeteria workers must use to cook and wash dishes.

“We often say that we are out of context for the county that we live in,” said Amy Wooliever, superintendent of the La Honda-Pescadero Unified School District, who started as a teacher in Pescadero in 1991. “Because of our rural nature, we have infrastructure problems that others don’t understand.”

The problems extend beyond infrastructure. Wooliever says it can be difficult to provide students the instruction they need — already more expensive per student than in a large school district — because of the depressed tax base.

“What we are concerned about is that we don’t have a sustainable funding model going forward,” she said.

Wooliever and many other locals say one of the biggest problems is the very organization that helps give Pescadero its charm — the Peninsula Open Space Trust (POST), a 40-year-old non-profit based in Silicon Valley, which buys up vacant land to protect it from development.

The organization says it has protected some 76,000 acres in a three-county area. That includes a substantial amount of land in and around Pescadero, which POST says would be a much different place without its efforts.

“You would have many, many more second home luxury developments, and so you would have an area that was locked up for private use rather than public use,” said POST president Walter Moore.

“We’re being loved to death by it,” she said.

As a non-profit organization, POST qualifies for a tax break on most of the land it owns, like this 1.26 acre parcel in Pescadero overlooking the Pacific Ocean. According to county records, the organization will owe just $299.14 in property taxes for 2018. In prior years, it has paid as little as $12.

The problem, she says, is that when POST buys land, it effectively takes it off of the tax rolls, choking off the main revenue source for the schools. POST says it currently owns 7,716 acres in the school district, worth about $52 million. But when POST buys property, it qualifies for a tax exemption as a non-profit organization. If POST’s land was in private hands, it would bring roughly $200,000 in property tax revenue to the school district, based on current funding formulas. Instead, POST pays about $45,000 per year in taxes.

“People in the area really do not favor POST,” said Bob McCahon, a local real estate broker, former school board member, and a lifelong resident. “They feel that POST is an absentee owner, and they’re not supporting the local community.”

McCahon points to a prime, 1.26-acre parcel directly overlooking the Pacific Ocean, with a market value of roughly $2 million. POST’s 2018 property tax bill for the site is about $300, according to the San Mateo County Assessor’s office. In prior years, POST has paid as little as $12 tax on the property.

“Every property has really damaged our local economy with taking property tax out of the school district,” McCahon said.

Wooliever points out that the current figure is just a snapshot, since POST typically transfers the land it purchases to another entity such as the California State Parks in order to permanently shield it from development. That means the true impact of POST’s land purchases is much larger than the current figures.

“It’s off the tax rolls essentially forever,” she said.

“Is Amy and the school district saying they don’t want Butano State Park or they don’t want the Pigeon Point Light Station Historic Park out there? This is a commonality to every community in California. They have protected lands,” he said.

Even so, Moore said POST is voluntarily making an additional $55,000 per year payment to the school district to make up for some of the lost tax revenue. Wooliever says the payment is appreciated, but it barely begins to make up for the longer term impact of POST’s purchases over the years.

“We’re looking more in the neighborhood of $120 million to $140 million of land that has been purchased by Peninsula Open Space since about 1997,” she said. “So it’s about almost three times what POST owns now.”

The organization is contributing in other ways as well, helping to fund some local housing development, as well as other projects, like restoration and flood control at a local creek. But Moore points out that as a tax-exempt charity, the organization is bound by its mission, which does not include schools, housing, or poverty relief.

“POST’s role and mission is the protection of the rural and ag heritage. That is our mission. That’s our vision. We believe it’s what makes this area unique,” Moore said.

Locals say they love the open space as well. But many are increasingly wondering if it is worth the price.