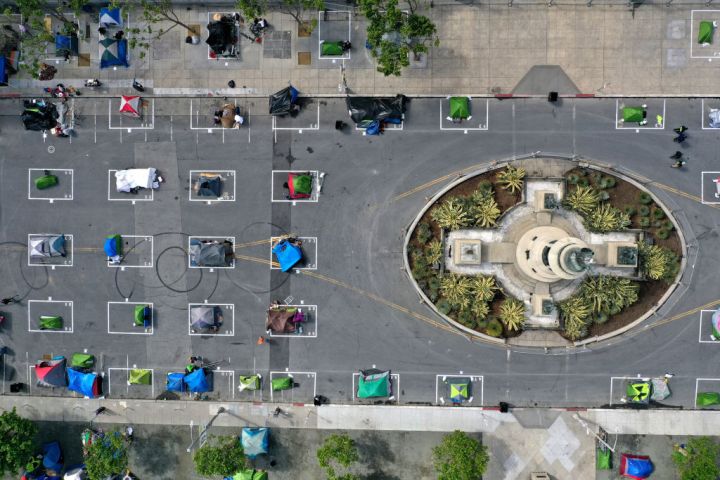 COPY
An aerial view of San Francisco's first temporarily sanctioned socially distanced tent encampment for the homeless in May 2020. Housing costs are a key contributor to poverty in the state. Justin Sullivan/Getty Images

An aerial view of San Francisco's first temporarily sanctioned socially distanced tent encampment for the homeless in May 2020. Housing costs are a key contributor to poverty in the state. Justin Sullivan/Getty Images
Listen Now

The world’s fifth-largest economy could be in line for a new boss. When polls close Tuesday, the statewide vote on whether to recall California Gov. Gavin Newsom will be wrapped up. At least a third of registered voters have already cast their ballots. With all the attention on Newsom potentially needing a moving truck, other important news might get overlooked. Tuesday is also the day the U.S. Census Bureau releases poverty statistics for 2020. In 2019, California had the highest poverty rate in the country.

The Census Bureau came out with a better way to measure poverty a decade ago, one that adjusts for the fact that, say, living in Los Angeles is a lot more expensive than living in Jackson, Mississippi.

And even though California has one of the strongest social safety nets in the country, 17% of its residents were impoverished in 2019.

Even with the state’s record-high unemployment in 2020, she expects the big boost in federal assistance to have reduced the poverty rate. But struggling Californians may have benefited less than those in other states.

“There’s also the factor of immigration … so children are typically eligible for benefits, but sometimes their parents are not,” Danielson said.

California has the highest share of immigrants in the country, and many of those families live in the Central Valley, a huge agricultural region that’s often overshadowed by the San Francisco Bay Area and LA.

“We’re a big state, so you know, in some respects we have parts of the country that will look like the wealthiest of wealthy places, but we also have places that will be among the poorest of the poorest,” said Chris Hoene, director of the California Budget & Policy Center.

Hundreds of thousands of low-income Californians have left the state in recent years.

Michael Flood is CEO of the LA Regional Food Bank. He said relocating is a frequent topic among those who wait hours for food outside the South LA headquarters.

“Just picking up and moving to another city isn’t necessarily something that’s going to be successful,” Flood said.

Because rentwise, other parts of the country are starting to look more like California.