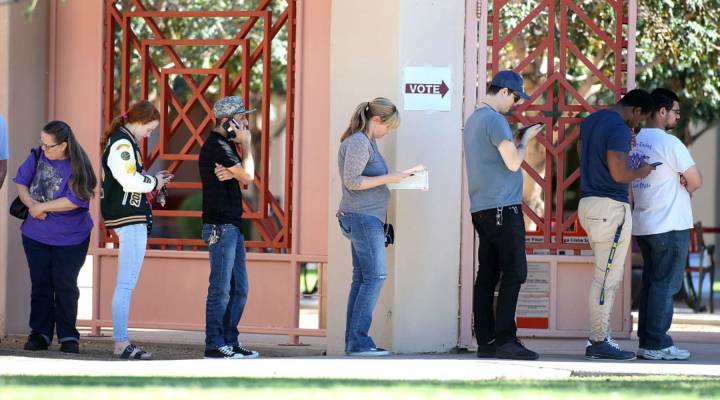 Arizona voters wait in line to cast their ballot at a polling place during the midterm elections on November 6, 2018 in Phoenix, Arizona. Arizonans are deciding on a U.S. Senate seat between Republican Martha McSally and Democrat Kyrsten Sinema, among other local races.  Ralph Freso/Getty Images

Arizona voters wait in line to cast their ballot at a polling place during the midterm elections on November 6, 2018 in Phoenix, Arizona. Arizonans are deciding on a U.S. Senate seat between Republican Martha McSally and Democrat Kyrsten Sinema, among other local races.  Ralph Freso/Getty Images

Many businesses are going out of their way to encourage voting, and others stepped in on Election Day to provide free or discounted rides to the polls. Thirteen states have laws mandating paid time off to vote, and more than 350 individual companies of various sizes have pledged to give their employees paid time off to vote.

Most other developed nations hold their national elections on weekends or make the day a holiday. But in many parts of the United States, the time it takes to vote can come out of a worker’s paycheck or a company’s bottom line. According to an estimate from Challenger, Gray & Christmas, between the time off for voting and the distractions of following coverage all day, productivity losses for Tuesday’s election could reach up to $3.5 billion per hour. That’s more than the company’s estimate for the economic drain of March Madness ($2.1 billion).

“No matter where, whether in the office or out in the field, people are going to be distracted during these important election days,” said Andy Challenger, vice president at the firm. “It’s one of those things that’s a little bit difficult for companies to predict and prepare.”

Which is probably part of the reason 65 percent of U.S. adults surveyed by the Pew Research Center say they favor making Election Day a federal holiday.