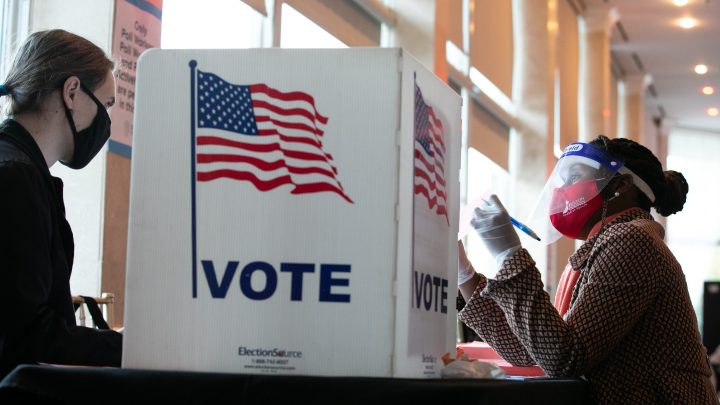 In response to these laws, a group of more than 70 Black business executives, led by Kenneth Frazier and Kenneth Chenault, are calling on companies to publicly oppose restrictive voting bills. “Marketplace” host Kai Ryssdal spoke with Frazier, the CEO of Merck, and Chenault, the former CEO of American Express and current managing director of General Catalyst, about their efforts. The following is an edited transcript of their conversation.

Kai Ryssdal: Mr. Chenault, let me start with you, sir, and ask you this question: You have said in the past week as this letter and the thing that you and Mr. Frazier are trying to get done has become public, you have said it is time for actions, not statements. What does that look like to you?

Ryssdal: So Mr. Frazier, let me take a twist on that and point out that the Georgia law is already signed. It is a done deal, it is law in the state of Georgia. Companies down there, and, in fact, you two were both reasonably quiet during the period the law was being debated. Has the horse already left the barn, as it were?

Kenneth Frazier: I don’t believe so. I think it’s important to recognize that laws like this are being proposed in 43 states around the country. And you know, while the law is passed, you know, there’s always an opportunity, if people of good faith want to think about these kinds of things, to improve that law. So I think it’s important before this whole set of laws gets ginned up around the country for all people, including corporate people, to make sure that they understand that this really will impede the right of voters to vote.

Ryssdal: Mr. Chenault, in the last couple of days, a lot of CEOs, especially ones in Atlanta, and in Georgia, have have spoken up as you and Mr. Frazier have gotten more publicity for your work. And I’m thinking here of the CEO of Coca-Cola. Also Ed Bastian, the CEO of Delta Air Lines. What do you make of the move in the Georgia House? It did not become law, but what do you make of the move there to repeal a big tax break for Delta on jet fuel, in apparent retribution for Mr. Bastian’s comments opposing this law?

Chenault: I think it’s very unfortunate. If people express their opinion, there should not be retribution. And it frankly does not help the economy of Georgia. And fortunately, it did not pass.

Ryssdal: Do you think you’re having a moment here? I mean, is this a ripe opportunity to address a generations-long issue in American business?

Chenault: I hope so. And I think what’s absolutely critical here, and we keep on coming back to this, is the right to vote is a fundamental right. But with respect to Black Americans, the path to the right to vote was very torturous. And one of the points that I make, is just think, after Brown v. Board of Education in 1954, if companies said, “We’re now also going to integrate our workforces.” And so I think there is an opportunity for companies to stand up. And one of the things that Ken and I emphasize, this is a nonpartisan issue. And what I hope is that more companies will understand that there is nothing more fundamental than the right to vote, and they need to stand up for America and Americans.

Frazier: As Ken just said, this is a fundamental issue for our democracy. And I’m hoping that we will get many allies who will stand up, and will make sure that the public understands really what’s at stake for all voters here and for the legitimacy for our way of governing ourselves. And I think it’s also important for us to recognize that if we’re going to make changes in the name of ballot security, which is a valid, valid thing, we have to balance it by not having undue restrictions on ballot access.

Ryssdal: You know, so I said that was the last question and I meant it to be, but it’s not, because you brought up the fundamental point here, right? And, Mr. Chenault, let me direct this question to you. What’s at issue here is the big lie about the 2020 election. And I wonder how you now corral corporate America, where you two have a lot of sway to fight the political fight that is the fight against the big lie that the election was stolen from Donald Trump, while at the same time remembering that those companies, of which you two ran big ones, have to deal with customers and their whims and making money.

Chenault: I think what’s very important here and I think it’s the way I’ve always tried to lead my life and to lead American Express when I was CEO, and I know Ken feels the same way: You need to be governed by a strong moral code. And what we cannot do is be silent. To the point you made earlier, there has been no evidence of widespread fraud. And this is a very important moment for our democracy. And corporations must take a stand.