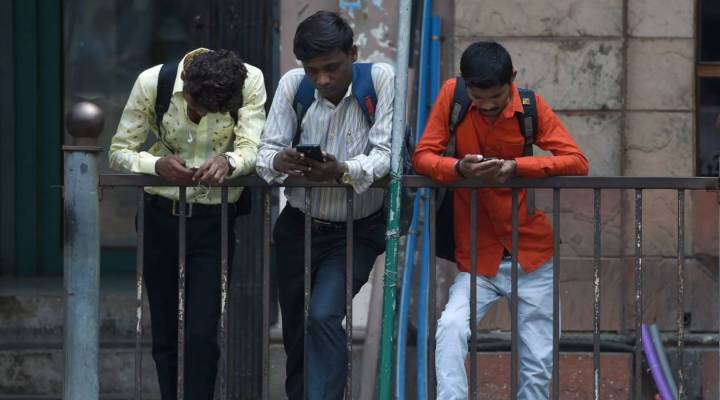 Thanks to cheap smartphones, hundreds of millions of people are accessing the internet for the first time. Yes, the latest iPhone costs over $1,000, but with some smartphones selling for less than a hundred bucks, the internet is accessible to more people in emerging economies. Ravi Agrawal, managing editor at Foreign Policy, talked with Marketplace host Kai Ryssdal about his new book, “India Connected,” on how those smartphones are changing India and its economy. The following is an edited transcript of their conversation.

Kai Ryssdal: I think maybe what we ought to do first is just have a primmer, I suppose, on the Indian economy and Indian society, right? It’s largely rural, it’s a little old fashioned in many ways, right?

Ravi Agrawal: That’s absolutely right. And, you know, this is a country that despite everything you hear about in the news of it being a big rising economy, which it is, it’s still overwhelmingly poor. I mean, the average Indian is making one-fourth what the average Chinese is making and one-twenty-fifth what the average American is making. So everything that’s going on in the West around the world, when it reaches India, it intensifies.

Ryssdal: And yet, it is now being introduced to the internet via these devices we hold in our hands as opposed to the way a lot of other countries did, which was dial-up modems, and then DSL, broadband, and we sort of got used to it. And now India is being plunked down in the middle of the internet via a smartphone.

Agrawal: You know, in the year 2000, only 2 percent of Indians had access to PCs and telephone landlines, and therefore the internet. This one device is getting hundreds of millions of people online in a way that is just unprecedented in the world.

Ryssdal: What’s it like when you get out of, say, Delhi or Mumbai and out into the countryside, and you pull your iPhone, you know, 8 or 10 or whatever it is, out of your pocket and show the people what’s it like?

Agrawal: That really is for them almost like a magical, mystical thing. They’ve never used any technology like this. And along comes a device that they can speak to and it speaks back to them and it shows them videos. It is also their first camera. It is also their first MP 3 player and Walkman. It is a first of everything, their first alarm clock. And on the one hand, that’s good. But it’s also overwhelming. You may not know how to use this device, you could be more susceptible to being addicted to it. You could be more susceptible to pornography, to fake news, to rumor mongering. There’s a whole bunch of things that it is unleashing in India that are quite dangerous.

Ryssdal: Well look, we’ve got to be honest, right? We are now seeing certainly in the United States in the past couple of years the way mobile technology is contributing to the spread of misinformation about many many things. I imagine in India the potential for harm is even greater.

Agrawal: It really is. For people who discovered the internet in the late 1990s, you used to receive chain mails on email. Remember that? You get this email saying, “Hey, if you don’t forward this to 10 people, you’ll be unlucky in love,” and we fell for it. You do it a few times and then you learn. And then you build your own sense of what to do and what not to do. In India, people didn’t go through that. People can be more gullible to it because they’re not used to looking at the internet as something that you don’t necessarily trust.

Ryssdal: One imagines that over time, the benefits of smartphone technology in a country of 1.3 billion, soon to be 1.4 billion, people, most of which is rural and poor, one imagines those benefits will even out over time, but in the short term, who’s winning? Is it the foreign companies? Is it the upper classes in India? Who’s getting the benefit?

Agrawal: I would say net net. This is a good thing for now. I think for the Indian middle class and the lower middle class, they are being able to communicate with each other, they are being able to look for jobs in ways that wasn’t possible before, they’re more efficient, they can use maps. I mean, this is something that, growing up in India, it was hard to project forward and imagine that this would happen, that a device would be in everyone’s hand of any sort. This is revolutionary, and that is a good thing.