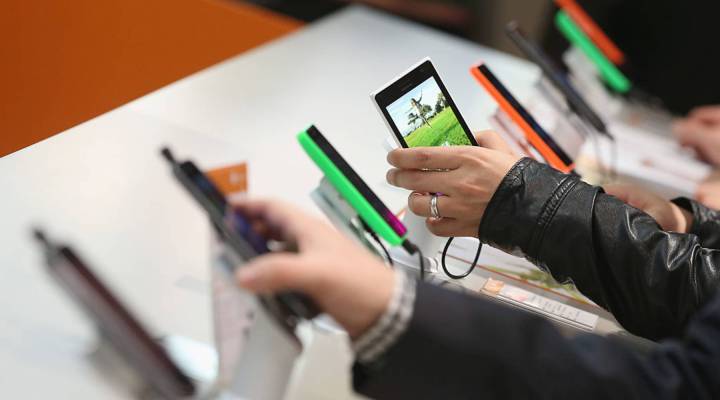 COPY
“As of the first quarter of 2017, Chinese brands have doubled their market share,” says Wall Street Journal reporter Liza Linn. “So you're looking at a market share globally of 40 percent. Basically, they're eating Apple and Samsung for lunch.” Sean Gallup/Getty Images

“As of the first quarter of 2017, Chinese brands have doubled their market share,” says Wall Street Journal reporter Liza Linn. “So you're looking at a market share globally of 40 percent. Basically, they're eating Apple and Samsung for lunch.” Sean Gallup/Getty Images
Listen Now

The $600 to $800 price tag on the latest Apple or Samsung smartphone could create some serious sticker shock, especially compared to the much cheaper models from Chinese competitors. Chinese smartphone brands from the Pearl River Delta region and the city of Shenzhen are gaining market share fast. They can contract with manufacturers in Shenzhen who are already tapped into the region’s vast smartphone supply chain and pump out low-cost phones under their own brands, no designing or engineering necessary. The Wall Street Journal went to Shenzehn to find out what it would take to make their own smartphone brand. Wall Street Journal reporter, Liza Lin, talked to Marketplace host Kai Ryssdal talked to about how she and some of her colleagues created their smartphone, the WSJ 1, for just $70. The following is an edited version of their conversation.

Kai Ryssdal: So were you guys just sitting around the Journal bureau in Hong Kong one day and said, “Hey, listen, let’s make a phone”?

Liza Lin: We are looking for a way to tell the story of Shenzhen and the Pearl River Delta, which is pretty much the area that makes all the smartphones in the world. And the Asia editor came up, and he’s like, “Why don’t you guys make a smartphone?” And that was when we were like, “What? OK.” So a colleague of mine made some calls to Shenzhen, we looked on Alibaba.com, found a couple, narrowed it down and that was it, we went down.

Ryssdal: And you wind up making a phone that costs $70. I’m going to say that again, 70 bucks — the WSJ 1 — and it works, and it’s got some small amount of bells and whistles. And all of a sudden, you guys were in business. It was crazy.

Ryssdal: There’s a great phrase that one of the folks in your video uses, and he talks about technology as a commodity, and I wonder really if what’s going on in south China now is technology manufacturing as a commodity? They have this thing that everybody wants.

Lin: Indeed. When China started to open up its economy to the world, and that was back in 1980, Shenzhen was earmarked as a special economic zone. So a lot of foreign companies came in — think of guys like Nokia, Motorola — and the economy just built up from there. So now you have a thriving supply chain for any sort of electronic product that you can think of.

Ryssdal: Not that the Wall Street Journal is going to get into the telephone manufacturing business — you guys are not a competitor — but what does sort of the larger lesson of you making the WSJ 1 mean for companies like Apple and Samsung, who are right now the giants?

Lin: So in 2012, the Chinese brands had a global market share of 20 percent. As of the first quarter of 2017, Chinese brands have doubled their market share. So you’re looking at a market share globally of 40 percent. Basically, they’re eating Apple and Samsung for lunch. They’re expanding in India. They’re expanding in Indonesia. Africa in some cases, too. And these are the emerging markets that Apple and Samsung will have to go into.

Ryssdal: So you’ve got these 20 WSJ 1s. What are you going to do with them?

Ryssdal: Because I bet everybody wants one, right?

Lin: Yeah, there was a bit of a tussle in the office about who would get those phones.