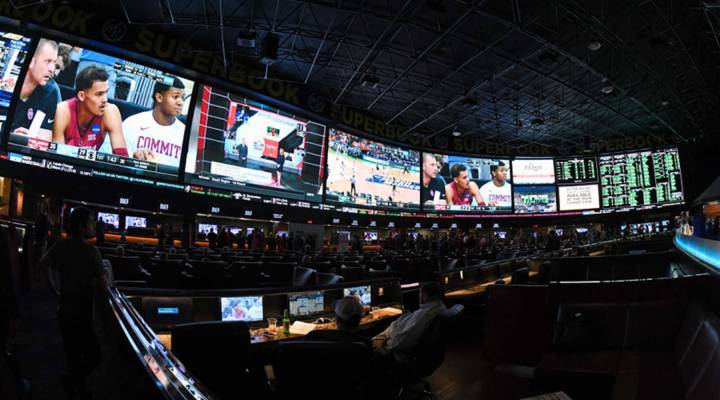 This is peak season for sports junkies — the one time of the year when all five men’s professional sports are in action. Tonight you can catch a games from MLB, Major League Soccer, the NBA, NHL and NFL.

It’s the first time that’s happened since the Supreme Court cleared the way for legal sports gambling all over the United States back in May. Bookmakers are looking at a potential market upward of $70 billion a year.

The leagues want a slice of that; an MLB official recently called it a “royalty.” But they’ll benefit even without it, according to a new report commissioned by the American Gaming Association, the trade group for the gambling industry.

The report says legalization will generate more than $4 billion in additional revenue for the big sports leagues.

“It will drive more people to watch, whether it’s buying tickets to games, [or] whether it’s watching games and then because somebody on the team they were pulling for, because they bet on them, scored an important touchdown, they go out and buy the jerseys,” said N. Jeremi Duru, who teaches sports law at American University.

With more viewers, the leagues will be able to charge more for ads, Duru said.

The leagues will get another big chunk of money from gambling sponsorships and advertising, said Michelle Minton, senior fellow at the Competitive Enterprise Institute.

“And this is enormous,” Minton said. “Because throughout the world, gambling interests are among the largest sponsors of sport. And in the U.S., they really couldn’t engage in that kind of behavior because gambling on sports was illegal.”

Keep in mind that this report was commissioned by a gambling industry trade group. It wants to make legal betting look like a good deal for the leagues. So we have to take the estimates with a grain of salt, American University’s Duru said.

“But even with a grain of salt, you’re going to end up getting really substantial increases in revenue,” he said.

The leagues want more. They’re asking for a cut of the betting action. Recently an MLB official said a quarter of a percent sounds about right. The bookies are arguing that’s unnecessary, said Stefan Szymanski, a sports management professor at the University of Michigan.

“They’re arguing that in fact the sports authorities will gain anyway because of the indirect benefits that will be derived,” Szymanski said.

Legal sports betting is already happening in six states, and it’s on the way in three more.