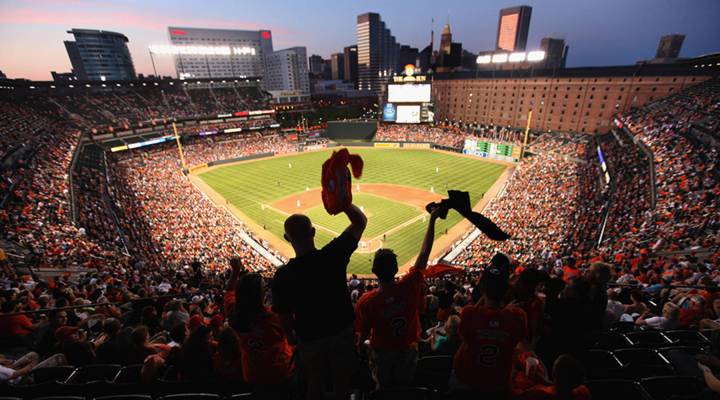 Fans cheer during the sixth inning between the Baltimore Orioles and St. Louis Cardinals at Oriole Park at Camden Yards on June 30, 2011 in Baltimore, Maryland. Rob Carr/Getty Images
Listen Now

Listener Peter Bailey of Plano, Texas, had this question:

What are the economics of fines in major sports? Who sets the prices? Where does the money go? And when it gets there, is it considered profit? Is there any evidence that these fines disincentivize the underlying behavior?

Professional sports in America are a $70 billion business, and include everything from Major League Soccer to the Kentucky Derby. But when most people in the U.S. talk about sports, they tend to focus on the major four: football, baseball, basketball and hockey. Each has its own three-letter leagues — the NFL, MLB, NBA and NHL — and those leagues have different structures. But they all deal with fining their players in basically the same way: through a collective bargaining agreement, or CBA.

“The CBA puts in certain specific amounts for fines for things that are league type of violations,” explained Larry Coon, general manager of Sports Business Classroom and an expert on the basketball collective bargaining agreement.

If a player misses a practice, that’s $2,500. Miss a promotional event and that could cost $20,000. Individual teams can fine players too.

“Other types of fines are against teams themselves or against executives or owners of the teams,” Coon said.

The job of doling out fines in the NBA falls to one person in the league’s office — the executive vice president of basketball operations. That’s Kiki VanDeWeghe, who has been busy this year. Last month, the league fined Dallas Mavericks owner Mark Cuban $600,000 for comments he made suggesting his team might be losing on purpose this year.

So where does all that money end up?

Cuban’s answer, via email, was pretty vague: “Usually goes to our philanthropic endeavors.” That’s about as specific as the leagues get, too. The NBA says that half of the fine money goes to the league’s charities and the rest goes to causes picked by the players’ union. The NFL and NHL say fine money goes to organizations that help out former players. Baseball funnels its fines to a central fund that’s then shared among the league’s 30 teams.

But does fining players actually work?

“It usually depends on the size of the fine,” said Uri Gneezy, professor of behavioral economics at the University of California, San Diego. He said if you’re a pro athlete making something like $10 million dollars a year, or a franchise owner worth billions of dollars, a $1,500 fine for yelling at a referee isn’t going to sting much. Gneezy said it ends up being a cost-benefit analysis.

The leagues don’t adjust the fines based on how much a player makes. That would be like getting a much higher parking ticket for people who drove a Rolls-Royce than those who drove, say, a Kia.

There’s also a tax implication with these fines. Before Jan. 1, a player fined by his team or the league could deduct the expense as it was considered a business expense. But the new tax law has made that expense different. “All unreimbursed employee business expenses, fines, agent fees, union dues – they are no longer deductible,” explained Robert Raiola, a sports and entertainment accountant at PKF O’Connor Davies. “So the players no longer potentially get a tax benefit from these fines.”

Fans won’t know whether that change in tax law will affect how players behave until after this year. But Raiola said before the new tax code, players didn’t rack up fines just to get a tax break, though he thinks it could lead to some changes.

“It’s not what you make, it’s what you keep,” he said with a chuckle.