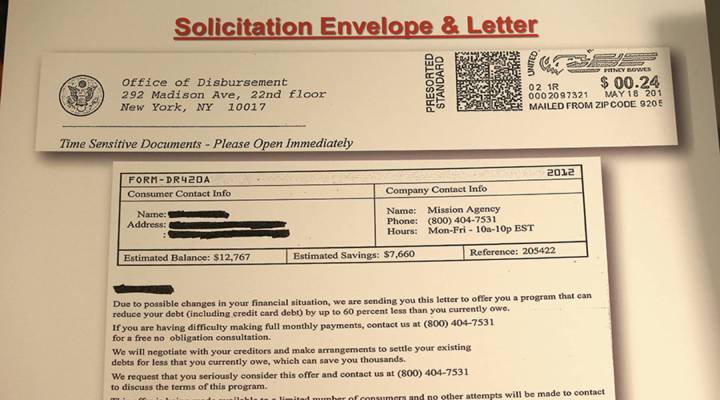 A poster of evidence is presented by then-U.S. Attorney for the Southern District of New York Preet Bharara during a press conference on May 7, 2013 in New York City. John Moore/Getty Images

A poster of evidence is presented by then-U.S. Attorney for the Southern District of New York Preet Bharara during a press conference on May 7, 2013 in New York City. John Moore/Getty Images

If the terms of your student loan agreement suddenly look different, if your bank opens a fake account in your name, or if your credit report is inaccurate, there’s a place that was specifically made for you to complain about that.

The watchdog agency, created as part of the Dodd-Frank financial reform law, notably hit Wells Fargo with a $500 million fine after they found bank workers opened as many as 2 million accounts without customers’ permission. But the bureau doesn’t just handle widespread financial abuses; they are also charged with helping out with problems on an individual level.

“[My complaint] wasn’t a big deal in the grand scheme of things, but it was a big deal for me and my personal finances,” said Colin Taylor, an Illinois resident who used the CFPB’s complaint process to fix his credit score.

So let’s say you have a problem you want to submit. Here’s how you get the ball rolling.

The agency collects problems you’re having with your credit card company, student loans, debt collection or your checkings/savings account, among other financial products and services. (You can see the wide range of complaints people have submitted in their database here.)

Colin Taylor, who’s a partnership director at the environmental nonprofit Student Conservation Association, said he thought he had closed his checking account with U.S. Bank, until he started receiving late fees for not keeping a minimum balance. He then filed a complaint through the CFPB back in May after those late fees ended up dinging his credit score. (When contacted about this situation, a spokesperson for U.S. Bank told us they do not comment on customers or their accounts as a matter of policy.)

Seattle resident Moira Tamayo told us she also experienced issues with her bank, and that she submitted a complaint after someone had cashed $600 worth of blank checks, in her name, from Citibank. (A spokesperson for Citibank told Marketplace they were reviewing the case.)

Kate Moody, a personal finance educator based in Wisconsin, said she went to the CFPB back in 2016 after noticing her student loan servicer Navient extended the terms of her student loan agreement, which she said happened without her knowledge. According to her calculations, she’d end up having to pay an extra $7,000 in interest.

“You can imagine how annoyed and frustrated I was at the time,” Moody said. “It was pretty shabby to get a letter saying we changed something you signed up for almost 10 years ago.”

A spokeswoman for Navient said they can’t comment on specific borrowers, but added, “our analysis shows that greater than 98 percent of all customer complaints last year were related to federal loan policies or disagreements with loan terms such as interest rates, not servicer error.”

The CFPB has a portal (available here), where you can identify the general category your complaint falls under, describe in detail what happened, and attach any relevant documents, like letters or receipts, to prove your case.

While Colin Taylor and Moira Tamayo said they first reached out to their banks to help them solve their issues before going to the CFPB, Kate Moody decided to go straight to the bureau.

Pamela Foohey, an associate law professor at the Indiana University Maurer School of Law, said each person’s situation is unique: for some, contacting an institution may get you a productive response, while for others, going to the CFPB might be the most efficient first step.

Tamayo, Moody and Taylor all described the portal as incredibly straightforward and user-friendly. Near the end of the portal, you also have the option of allowing the CFPB to publish the description of your problem in its complaint database, with the aim of helping others learn from your experience.

After you file your complaint, the CFPB will pass it along to the company you’re having issues with. However, there are some cases when the bureau will send it to another government agency that it thinks can handle your problem better.

Before forwarding the complaint, the CFPB doesn’t actually verify all of the facts in it.

“[The CFPB] looks at the person to make sure it’s a true person and that there’s a true problem, but not the truth of the problem,” Foohey said.

That’s where the CFPB gets some criticism. Organizations like the American Bankers Association have pointed out that people could file false complaints. And President Donald Trump’s interim pick to head the bureau, Mick Mulvaney, said he wants to cut off public access to the CFPB’s complaint database, calling it a “Yelp for banks.”

But Colin Taylor argues that risk is outweighed by the support the CFPB offers to consumers.

After a company receives your complaint from the bureau, they have 15 days to respond to you and the CFPB through the bureau’s online portal, although they can request additional time of up to 60 days.

Foohey said that this way, a company is likely to respond to customers because the CFPB requires it.

“They can look at the complaints that the consumers are submitting, see if there are companies that are getting a lot of complaints, and then use their other powers to investigate,” she noted. (That’s where the CFPB’s enforcement division comes in.)

Colin Taylor hadn’t expected a response back from U.S. Bank. But about 20 days later, the company sent him a check refunding his late fees, and an email stating they would ask consumer reporting agencies to remove the “30-day-late delinquency” it had reported to them, which is what lowered his credit score.

The student loan servicer Navient called Kate Moody exactly one day after she filed her complaint, asking her how they could fix her student loan terms (which they ultimately did.)

“I was flabbergasted,” Moody said. “You don’t get this good customer service from anybody.”

Moira Tamayo also received a fast response after filing her complaint. Within two days, she said she received a call from a Citibank representative who helped get her money back.

“I was really impressed,” Tamayo said. “You have this idea that it’s like the DMV, but the process was super fast.”

After the company has responded to the CFPB with the steps they’ve taken, you can close out your complaint and provide feedback to the bureau in a survey.

“It was such an amazing resource, because if I could afford a lawyer, I could have sent them a letter. But I can’t do that,” Moody said. “So with many of those tiny extra fees that you get with, you just end up paying because it’s not worth trying to fight the bank.”

But just because a company responds to the CFPB about a complaint, doesn’t mean they’ll resolve it.

Raelene Schifano, a gymnastics club owner from Washington state, said she hasn’t had luck with the agency.

Over the past year, she’s filed complaints about the lender Evergreen Home Loans over issues ranging from water damage to incorrect appraisals of her home.

In a letter sent to Schifano, the company said they conducted multiple investigations and found no evidence to support her concerns. And when reached for comment, an Evergreen Home Loans spokeswoman told Marketplace, “We were not responsible for the issues that Schifano filed for.”

Schifano said, “The CFPB shows [your complaint] to the company. But if the company said they didn’t do that, they close it. The CFPB just pushes papers back and forth. So where’s our protection?”

However, Moody, Tamayo and Taylor said they were satisfied with the CFPB’s process. And in Taylor’s case, he actually left the experience with positive feelings toward U.S. Bank.