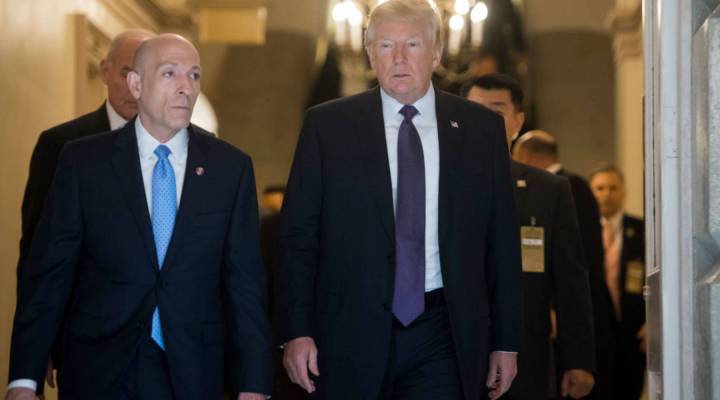 WASHINGTON (AP) — The government official President Donald Trump wants to pass over as acting director of the Consumer Financial Protection Bureau with his own budget chief is asking a federal court to block the president’s appointment.

Leandra English, who was elevated to the position of interim director of the CFPB by its outgoing director, filed a lawsuit Sunday night in the U.S. District Court for the District of Columbia. She asks for a declaratory judgment and a temporary restraining order to block White House budget director Mick Mulvaney from taking over the bureau.

English cited the Dodd-Frank Act, which created the Consumer Financial Protection Bureau. She said that as deputy director, she became the acting director under the law and argued that the federal law the White House contends supports Trump’s appointment of Mulvaney doesn’t apply when another statute designates a successor.

English was chief of staff to bureau director Richard Cordray when he named her deputy director as he prepared to resign last Friday. Cordray was appointed to the position by President Barack Obama and has been long criticized by congressional Republicans as overzealous.

Mulvaney, a former congressman, has called the agency a “joke” and an example of bureaucracy run amok. He is expected to dismantle much of what the bureau has done.

The White House, with the support of an opinion issued Saturday by the Justice Department’s Office of Legal Counsel, maintained that the president has the power to appoint an acting director. Steven A. Engel, newly confirmed head of the office, wrote that, while the deputy director may serve as acting director under the statute, the president still has authority under the Vacancies Reform Act.

A new director must be confirmed by the Senate. Earlier Sunday, Sen. John Thune of South Dakota, the third-ranking GOP leader, pledged swift action whenever Trump nominates a successor to Cordray. Meanwhile, Thune said he expected that Mulvaney “will be on the job and he’ll be calling the shots over there,” but acknowledged the issue could end up in court.

Beyond the fight over who’s in charge is the future direction of the bureau, created after the 2008 financial crisis and given a broad mandate as a watchdog for consumers when they deal with banks and credit card, student loan and mortgage companies, as well as debt collectors and payday lenders.

“All Americans should be deeply concerned about the White House’s cynical decision to flout the law and attempt to put the ringleader of its dangerous, anti-consumer protection policies in charge,” House Democratic leader Nancy Pelosi of California said in a statement issued before the lawsuit was filed.

Taking aim at Mulvaney, she said the public deserves “a champion that protects them from predatory bankers and lenders, not the leadership of a Wall Street pawn who denigrates consumer protection as a ‘sick, sad joke.’”

Senate Democratic leader Chuck Schumer joined Pelosi in arguing that English was the rightful acting director. He accused Trump of ignoring the law “in order to put a fox in charge of a hen house.”

Thune said he hoped eventually to see “reforms to that agency, which has essentially very little accountability to the Congress or anybody else.” Another Republican, Sen. Lindsey Graham of South Carolina, said he thinks Trump was on “good ground” to pick Mulvaney for the job and hopes Mulvaney “will ride herd on these folks.”

Sen. Dick Durbin of Illinois, the No. 2 Democrat in the Senate, said putting Mulvaney in charge was part of an effort to destroy the bureau.

“Wall Street hates it like the devil hates holy water,” Durbin said. “And they’re trying to put an end to it with … Mulvaney stepping into Cordray’s spot. But the statute is specific, it’s clear, and it says that the deputy shall take over.”

Thune appeared on “Fox News Sunday” while Durbin and Graham spoke on CNN’s “State of the Union.”