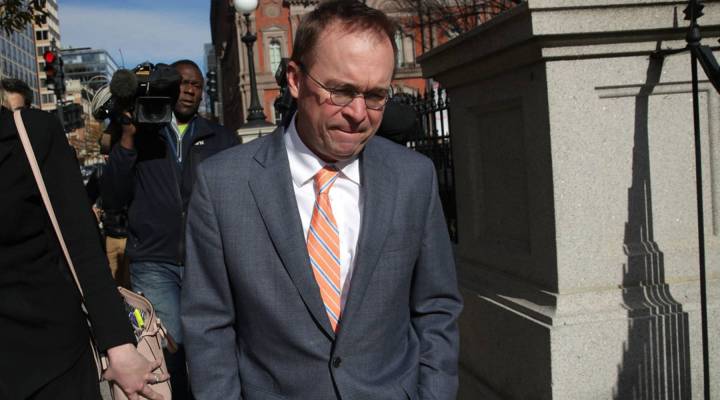 COPY
Mick Mulvaney, President Donald Trump's pick for acting director of the Consumer Financial Protection Bureau, walks back to the White House from the CFPB building after he showed up for his first day of work on November 27, 2017 in Washington, D.C.  Alex Wong / Getty Images

Mick Mulvaney, President Donald Trump's pick for acting director of the Consumer Financial Protection Bureau, walks back to the White House from the CFPB building after he showed up for his first day of work on November 27, 2017 in Washington, D.C.  Alex Wong / Getty Images
Listen Now

Republicans in general, and the president in particular, don’t like the Consumer Financial Protection Bureau set up after the last financial crisis. The president has said the CFPB is a failed agency which hurts consumers by hurting financial companies. Supporters point out it’s the only federal agency solely focused on keeping banks, credit card companies and other financial firms from hurting consumers.

And this morning it’s not clear who really is in charge over there. President Donald Trump put in Mick Mulvaney, the director of the Office of Management and Budget, as the boss. But outgoing director Richard Cordray had appointed Leandra English, the deputy director, as the interim boss, and she took this to federal court last night.

Her lawyer, Deepak Gupta, joined us to discuss the legal steps he’s already taken and why he’s fighting for this particular case. Below is an edited transcript of the conversation.

David Brancaccio: Help me understand this. The Office of Legal Counsel at the CFPB  looked at this and the quote is, “I advise all bureau personnel to act consistently with the understanding that director Mulvaney, is the acting director of the CFBP.” Is that counsel just wrong?

Deepak Gupta: Yes. And I think the law is quite clear on this. The Dodd-Frank Act, the law that created the Consumer Financial Protection Bureau, says that the deputy director takes over when the director of the bureau is absent or unavailable. And the administration’s argument relies on a background law called the Federal Vacancies Reform Act. But the problem with that argument is that the Dodd-Frank Act speaks very specifically to this situation, and it was enacted later.

Brancaccio: Right, but I’m not fully clear what the fight is about. Now the Republican-led U.S. Senate confirms the permanent head of the CFPB. And so none of this is for long, is it? What is pushing you toward fighting over something that could just be for a little while?

Gupta: The minute you start having someone — even if it’s for a temporary period of time, and we don’t know how long that period could be, it could be indefinite — who is in the White House and also running the agency, they can do quite a lot of damage to the the independence and the mission of the bureau. But it also is a situation that could really meaningfully affect American consumers and the important progress that the bureau has made for consumers in the time since it’s been set up.

Brancaccio: Any sense when you’ll hear back from the courts on this?

Gupta: Well, we’ve filed not just a legal complaint, but also a request for an emergency temporary restraining order. And so it’s my experience that the courts hear those cases very quickly. The Justice Department has already assigned lawyers to the case and we’ve been in touch with them.

Brancaccio: Mr. Gupta, I get that you’re not actually over at the CFBP building at the moment, nor are you the security guard in front checking IDs as new directors come and go. But how far is your team willing to push this? Are you going to lie down in front of the tanks here, metaphorically speaking?

Gupta: No, I think this is why we have courts and we don’t have to resolve differences with confrontation. We can do it through fleshing out the legal arguments and allowing a judge to decide. And I’m confident that the process will play out in a reasonable way. We think we have the better end of the argument, but there are legal arguments on the other side. And that’s why we have courts.