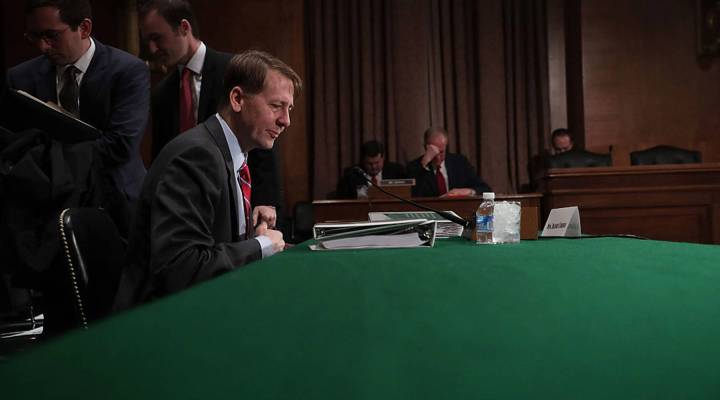 COPY
Director of the Consumer Financial Protection Bureau Richard Cordray waits for the beginning of a hearing before the Senate Banking, Housing and Urban Affairs Committee earlier this year on Capitol Hill in Washington, D.C. Alex Wong/Getty Images

Director of the Consumer Financial Protection Bureau Richard Cordray waits for the beginning of a hearing before the Senate Banking, Housing and Urban Affairs Committee earlier this year on Capitol Hill in Washington, D.C. Alex Wong/Getty Images
Listen Now

The Consumer Financial Protection Bureau has long been a thorn in the side of banks and of Republicans, who are targeting it for major changes or elimination.

The agency, created under the Dodd-Frank Wall Street Reform and Consumer Protection Act in 2010, advocates on behalf of consumers in their dealings with the financial industry. The CFPB says its actions have returned about $11.7 billion to consumers.

But critics argue that the agency burdens lenders with excessive regulation.

“It’s made it much more costly for banks and non-banks that are in the consumer finance space to operate,” said Alan Kaplinsky, who chairs the Consumer Financial Services Group at Ballard Spahr and represents some of these banks.

The banks end up passing these costs down to consumers, Kaplinsky said.

“They’ve had to change the way they do business, some of them increasing the fees that they charge or making credit less available to people who aren’t as creditworthy,” he said.

Republicans say they want to make the CFPB more accountable. Specifically, they have proposed changing its funding stream so its budget is approved by Congress, rather than the Federal Reserve, and replacing its single director with a five-member commission.

The agency “just, at a minimum, needs to look  much, much different,” said Congressman Bill Huizenga (R-MI). He wouldn’t rule out eliminating the bureau entirely.

The CFPB was the brainchild of Senator Elizabeth Warren (D-MA), and it has been a point of contention between Democrats and Republicans for years.

“We have been fighting to protect the Consumer Financial Protection Bureau ever since Dodd-Frank became law,” said Congresswoman Maxine Waters (D-CA).

The agency was created because regulators weren’t doing enough to look out for borrowers, Waters said.

“Consumers were not being protected at all,” she said.

Now that there’s a Republican president to go along with a Republican-controlled Congress, the GOP will have a better shot at getting its way.

The question remains, though: where will President-elect Donald Trump come down on this issue? Trump’s website says his administration will dismantle Dodd-Frank. Then again, he’s also said he’ll be tough on Wall Street.