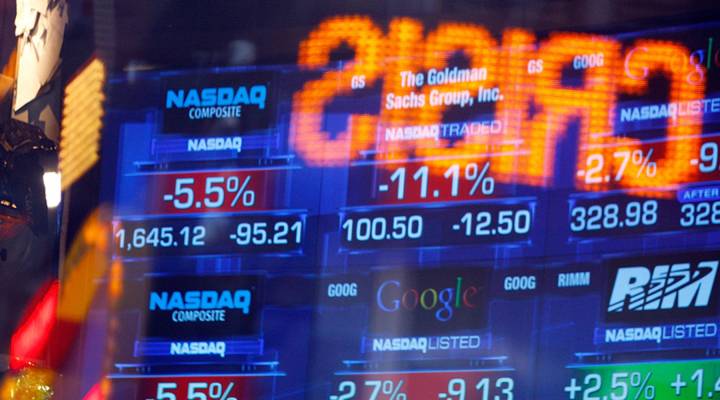 2018 marks 10 years since the financial crisis, and Marketplace is exploring how the shift in the economy since then continues to shape our lives today.

Through our series Divided Decade, people from all over the country have shared their stories from the Great Recession.

We’ve also covered the collapse of Bear Stearns, how the financial crisis shaped the housing market and the legislation we’ve put into place to help prevent another crisis.

Here at Marketplace, we weren’t just telling stories about the unfolding financial crisis. We were living it, trying to make sense of the new economic reality — not only for our audiences, but for ourselves.

Click the audio player to hear Marketplace digital intern Danielle Chiriguayo’s take on 2008, and then take a look at Marketplace staffers’ memories below.

The financial crisis became real when: For a long time, the financial crisis seemed remote. I did lots of stories on banks and financial institutions that were having trouble, but I had faith in our financial system. And I thought bank failures were a relic of the Great Depression. I did a number of stories on Lehman Brothers.  The headline on one, from August 2008, said: “Is Lehman’s very survival in jeopardy?” It’s so funny to look back on it now. I asked economists if they thought Lehman would survive. Many were doubtful, but one analyst thought Lehman would make it. I played the song “I Will Survive” under his soundbite!

I first realized we were in real trouble when a money market fund “broke the buck.” That is, a share in the fund was worth less than a dollar. That means investors in that fund are losing money and won’t even get a dollar back for each dollar they put in. That’s when I fully grasped that individual investors were going to get hit hard, and we really were in a crisis.

The financial crisis became real when: I had been covering what we initially called the “credit crunch” for months as Marketplace’s New York bureau chief, but I don’t think the word “crisis” really hit me until the weekend Lehman Brothers went under. Early the next morning, on Sept. 15, 2008, I filed this interview with then-host Scott Jagow, and it’s crazy to me now to remember how much had happened in just one weekend. Soon after, I hit the road from North Carolina to St. Louis, talking to people along the way about how the crisis was affecting them. The day I arrived in St. Louis, Oct. 9, the Dow lost another 7 percent as the U.S. Treasury announced a plan to buy equity stakes in some banks. That’s when the crisis became personal to me, as the money we’d invested to one day buy a house kept shrinking.

The financial crisis became real when: What I remember is how traumatizing it was to write the numbers — the little segment in every show where Kai runs through what happened in the markets that day. Editors take turns writing the numbers. Each one of us does it for a week. And back then, the market was sinking like a stone and no one knew where it would end. On the air, we were advising listeners to “Look away. Don’t check your retirement accounts. Remember, investing is about the long term.” But if you were working at Marketplace, you could not look away. The financial crisis was 24-7, 360 degrees. And even if you weren’t working, you were thinking about what we should be covering as the crisis unfolded. And if you were an editor, and it was your week to write the numbers, well, there really was no place to hide.

The financial crisis became real when: For many the financial crisis began in 2008. I believe, if not the beginning of the crisis, certainly the catalyst for me was the summer of 2007. My condo’s equity was at an all-time high and I decided to sell. I called my brother, who was a realtor at the time, and he planned an open house for Aug. 25 and 26. On Aug. 23, Countrywide announced that Bank of America was propping them up with $2 billion. It was the beginning of the end. At that moment, money became tight and no one came to the open house. The next thing I knew, I was $100,000 upside down and couldn’t take advantage of any government-backed refinance plan because I had just gotten a job at Marketplace.

I stayed in the condo out of necessity and am now finally back to the same amount of equity as I had in 2007. I may try to sell again, but I don’t want to start another crash.

The financial crisis became real when: In 2008, there were no “now hiring” or “help wanted” signs anywhere. There were billboards on the road outside our office for an 800 number if you were facing foreclosure. I went to rural South Carolina and met people who didn’t have steady jobs and hadn’t for many years, like the young family man training in welding after he got laid off at a motorcycle plant. And the woman in her late 60s who’d worked all her life at textile mills and her mill had shut down — now she was getting help from a displaced worker program to learn how to read.

Heading north to Chicago, I spoke with a new art school grad with a major in poetry — he laughed a hollow laugh about that. A young man with a degree in sports management told me the dream he kept having: He was on a basketball court and had to sink a free-throw to get a job — but he missed. Just outside Atlanta, a woman in her 30s living in her grandfather’s basement shared her story — she’d gotten into spiraling payday loan debt when her car broke down and she couldn’t get to her job at Walmart. In California, a young father in San Bernardino talked about eating ramen at the end of the month when his pay as a warehouse worker ran out, all while his toddler ran around their broken-down apartment.

Back home in Portland, Oregon, the most popular costume for Halloween was “zombie banker;” the most clever was “mortgage-backed security blanket.” A local astrologer told me global markets were in chaos because Mercury had gone retrograde. A young college-educated woman eating her bag lunch in a downtown park said she was working three jobs, including as an office temp. She told me: “I’ve never made any money.”

In 2008, I was grateful to have a job. Telling people’s Great Recession stories seemed incredibly meaningful back then.

Do you remember the moment you realized what was happening? If you do, let us know in the comments below!