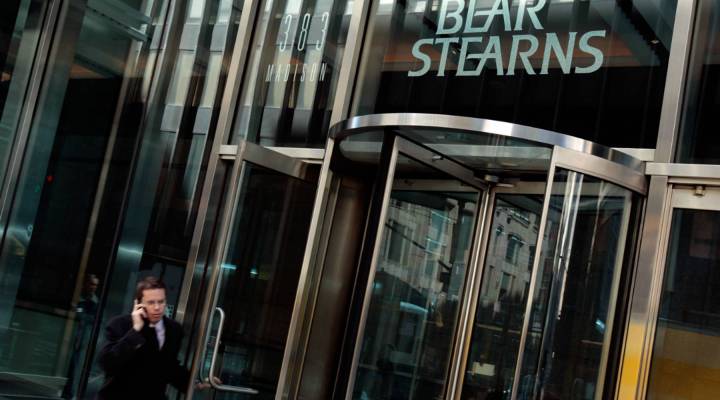 Ten years ago this week, there was a wild milestone in the history of the 2008 financial crisis: the government arranged a shotgun marriage between JPMorgan Chase and Bear Stearns.

JPMorgan ended up buying the collapsing Wall Street institution Bear Stears for pennies on the dollar.

Reporter Kate Kelly got very acquainted with the culture as the bear mauled Bear, and wrote a book called “Street Fighters: The last 72 hours of Bear Stearns, the Toughest Firm on Wall Street.”

Kelly, who now works for the New York Times, joined us to discuss the culture at Bear Stearns and whether Wall Street has really changed since the financial crisis. Below is an edited transcript.

David Brancaccio: In the book, you make a point. Bear Stearns somehow attracted a different crowd of folks from perhaps some of the other banks on Wall Street. What are we talking about?

Kate Kelly: So there was a cultural saying that they liked to hire people who were PSDs — poor, smart and had a deep desire to be rich. They just wanted people to be quick studies, hard workers and highly motivated. And of course, this being Wall Street, greed was regarded as the primary motivator.

Brancaccio: The CEO at the time, Jimmy Cayne — I mean, he’s part of this isn’t he?

Kelly: Absolutely. Jimmy Cayne was very much a part of the culture of Bear. He started out and sort of worked his way up. And Jimmy led the firm during its most successful years. He was a billionaire on paper at one point due to his Bear Stearns stock holdings and the first Wall Street CEO to achieve that level of wealth through corporate ownership. And in many ways, he was a culture carrier and beloved. But in other ways, and certainly toward the end, he was starting to slip in terms of his level of commitment to the job, his availability, his being on top of the issues and the risks. He was a bridge lover. He would be on the road multiple times a year playing in bridge tournaments. He also was known for other pastimes outside the office, including that he liked to smoke pot.

Brancaccio: But we shouldn’t see Jimmy Cayne as a counterculture icon. He was also really into golf, right? Pretty establishment there.

Kelly: That’s right. I mean, he was a huge golf enthusiast. He would go once a week to play golf, fly a helicopter, often leaving the city on Thursday afternoon — and not working on Friday, by the way, checking in occasionally by phone. And this was when he was CEO. So he was a golfer, he was an avid bridge player — that’s what brought him to that Memphis tournament. So he had other hobbies, and nothing wrong with that. But the issue with him was there was a red flag about Bears’ stability and sort of survivability in the year 2007, when two of its hedge funds collapsed, partly as a result of reduced valuations in the mortgage sector. So the fact that he didn’t double down on his office time — and sort of put aside some of these personal pastimes when the company had had a humiliating setback that year that was related to the bond market and the ability to get cash and credit and the ability to keep investors comfortable with what you were doing investment-wise — was remarkable.

Brancaccio: You’ve stayed on the Wall Street beat and covered the continuing mess at Bear Stearns, people losing their jobs, many across Wall Street who had to find different types of work. And I remember doing a story that bankers would be at some barbecue party during the financial crisis, and were loath to admit that they were even in financial services. They would make up other, more benign occupations: “I’m a teacher,” “I’m a doctor.” Rather than admit that they were bankers. Do you think Wall Street has changed since the financial crisis, or is it just that we’ve all moved on and it’s back to the culture that you’re describing?

Kelly: I do think it’s changed quite a bit. I mean I think the Dodd-Frank financial regulation reforms of 2010 and with them new capital requirements, the Basel requirements that are relevant to participating banks in various countries — I  think they have all made the system safer and much less likely to experience a similar crisis or series of failures. We’ve also seen business models change and adapt in a way that would allow these firms to better withstand a future crisis. Morgan Stanley, for instance, which experienced a bank run of its own in September of 2008, actually moved much more into private wealth management. They acquired assets from Merrill Lynch that allow them to expand their footprint dramatically, and that’s become a kind of steady source of revenue for them that has made them more stable and more attractive, I think, for investors. You’ve seen Goldman Sachs, which became a bank that could borrow at the Fed’s discount window — in other words, to access emergency funds from the Federal Reserve during the crisis, in the heat of the crisis. They went from an investment bank to a more traditional bank. And they’re now expanding their lending platform, and taking deposits. I don’t expect to see Goldman Sachs branches popping up, but they’re getting into that business in a way that probably no one would have expected 10 years ago. So I think we’ve seen business model changes that are aimed at stability and longevity. On the other hand, regulations may be going away. People are certainly still motivated by greed. But I do think a lot of measures have been taken that have reduced the gunslinger aspect of that time. I think that risk has moved into other spheres of the economy and the markets.