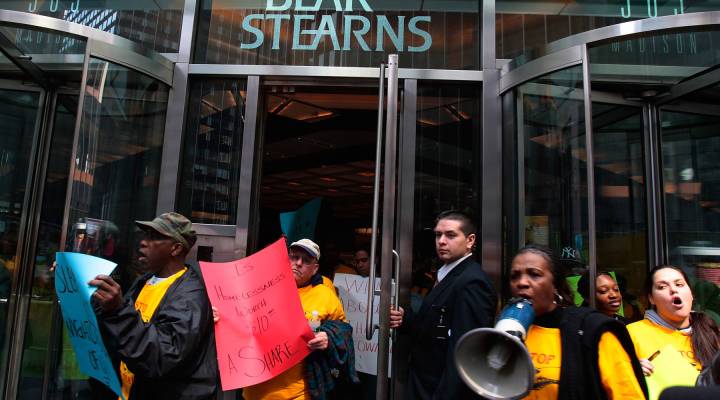 Protestors walk out of the lobby of the Bear Stearns headquarters March 26, 2008 in New York. Hundreds of housing activists overwhelmed security and stormed the lobby of the Bear Stearns skyscraper in Manhattan, staging a noisy rally and protesting the government-backed sale and bailout of the investment bank. Chris Hondros/Getty Images
Listen Now

By mid-March, 2008, Bear Stearns investment bank had been fielding questions about its financial health for months. The previous summer it had seen dramatic losses from a pair of its hedge funds that had bet heavily on subprime loans. But those questions morphed into powerful rumors of a liquidity crunch during the week of March 10. By Wednesday March 12, Bear Stearns CEO Alan Schwartz was compelled to go on CNBC to try to quash reports that Bear was running out of money and that other firms didn’t want to do business with it anymore.

“Our liquidity position has not changed at all,” Schwartz said. “Our balance sheet has not weakened at all.”

He added: “Part of the problem is that when speculation starts in a market that has a lot of emotion in it, and people are concerned about the volatility, then people will sell first and ask questions later, and that creates its own momentum.”

On Thursday, March 13, Schwartz notified the Federal Reserve that it would have to file for bankruptcy protection the following morning. Instead, the Fed arranged for an emergency bridge loan. Then, Friday evening, Fed officials told Bear executives that they had to find a buyer for the firm. Only one serious suitor emerged – JPMorgan.

“Anybody involved in the financial industry will never forget the first time they heard the price for Bear Stearns,” recalled Mike Mayo, managing director and bank analyst with Wells Fargo Securities. “Two dollars a share. Incredible.”

The purchase price was revised up to $10 a share a week later, but still, it seemed like a bargain for JPMorgan and a coup for its CEO, Jamie Dimon. Moreover, the Federal Reserve Bank of New York helped facilitate the deal by essentially buying billions of Bear Stearns’s riskiest assets.

“The market thought for JPMorgan, this was a home run,” said Mayo. “It all looked fantastic.”

But almost six years later, JPMorgan agreed to a $13 billion payment with the U.S. government to settle charges that it had mislead investors about the quality of mortgages it sold in the lead up to the financial crisis. In a 2015 letter to shareholders, Dimon wrote that the bank’s legal costs related to mortgage-backed securities totaled nearly $19 billion, 70 percent of which he said came — not from bad acts at JPMorgan — but from Bear Stearns and another bank it’d acquired, Washington Mutual.

Dimon wrote: “In case you were wondering: No, we would not do something like Bear Stearns again — in fact, I don’t think our board would let me take the call.”

“I think having pressed JPMorgan Chase to take over Bear Stearns, it was unfair to penalize them for the bad acts,” said former U.S. Rep. Barney Frank, a Democrat from Massachusetts, who was the chairman of the House Financial Services Committee during the crisis.

“Having the federal government, frankly, press a bank to take over a failing investment house wouldn’t be what you would do in an ideal situation,” he added.

But from the public’s perspective, Frank thinks the deal was better than the alternatives: “let [Bear] go bankrupt and not pay any debts and cause great reverberations of a negative sort the system or have the public pay the debts, which wouldn’t be attractive.”

The New York Federal Reserve Bank actually made a profit on the Bear assets it bought, more than $750 million, but many people have criticized the government’s involvement in this deal and the precedent it may have set.

For Frank, Bear Stearns’ failure convinced him that the government needed a better way to deal with failing institutions — an authority he wrote into the Dodd-Frank financial reforms that carry his name.