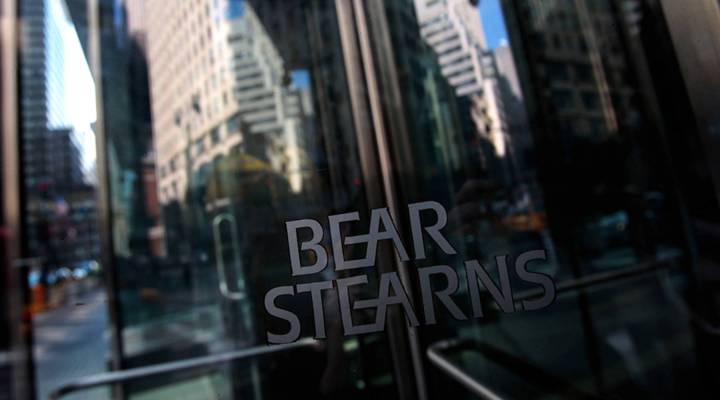 Bear Stearns was a Wall Street titan. And when it started to look like it was failing in March of 2008 under the weight of bad bets on mortgages, people started to panic. Bear’s stock was trashed, then the shares of other banks including Goldman Sachs and Lehman Brothers fell as panic spread. The Federal Reserve stepped in and eventually engineered a takeover by JPMorgan.

“After Bear was resolved there was a sense of relief for a little bit and then I think as the summer progressed there were more doubts,” recalled Michael Feroli, who worked at JPMorgan at the time and is now its chief economist. By fall, Lehman Brothers failed. Then insurer AIG collapsed.

“Everyone was looking around and saying ‘OK, we’ve had a sequence of failures. Who’s next?’” he said.

There have been many bubbles and bad bets in financial history. In fact, in terms of actual losses, the financial system has survived worse.

What set this financial crisis apart was, among other things, its contagiousness.

“The difference was that small losses were magnified through such a system of layers and layers of debt,” said Anat Admati, professor at Stanford’s School of Business. Banks borrowed to make bad bets, and then didn’t have a lot of money in reserve so when they lost their bets, they didn’t have much of a cushion. “It was a very interconnected, intertwined web of commitments, like a house of cards,” she said.

And of course, to make matters worse, they were all making the same bad bet – on mortgages – that had been repackaged so often that nobody quite knew if they were exposed or not. One question, often asked today, is whether there are other assets out there that are as deeply interwoven within the system, and as poorly understood.

“You will often see people allege things like ‘car loans are the new subprime housing’ or ‘student loans are the new subprime housing,’” said Austan Goolsbee, a professor of economics at Chicago’s Booth School who chaired the Council of Economic Advisers under former President Barack Obama. “They may be things that there are a lot of defaults on but that’s different from this is a thing that will bring down the financial system and spread from institution to institution,” he said.

Banks haven’t bet the farm on car loans and student loans, and these assets and markets are pretty well understood. “The banks themselves have tried to reduce the amount of debt and leverage they have, there’s a variety of ways they’ve tried to limit the amount of fire spreading,” Goolsbee said.

Of course, in 2010, President Obama signed the Dodd-Frank Wall Street Reform and Consumer Protection Act, a sprawling law that among many other things required banks to hold more capital to cushion against losses.

“The law we passed will prevent the problems that caused the crisis from recurring,” said Rep. Barney Frank, now retired, one of Dodd-Frank’s sponsors. The trouble, he said is “that you don’t know what the new problems are. You know, one of the problems is the financial system innovates and regulations don’t always catch up.”

Frank said the office his bill set up to monitor the financial system – the Office of Financial Research, which provides quarterly reports on the vulnerabilities of the financial system – is under resourced by the current administration. “What worries me is our ability to find the next problem, they’ve diminished that capacity,” he said.

Stanford’s Admati is a lot more pessimistic than that.

“They’ve changed very little. The system is incredibly fragile,” she said. Risky loans are still made, large financial institutions that aren’t technically banks are under-monitored and under-regulated, she said.

One defense, albeit a small one, against the next crisis is the fact that we are still talking about the last one, said Kenneth Rogoff, professor of economics and public policy at Harvard. “If you ask why we’re less vulnerable, some of it has to do with regulation, but a lot of it is that people are just still on edge even ten years later. They’re still so chastened by that experience.”

Otherwise put: there’s something to be said for the old expression once burned, twice shy. Then again, he added,“we can always do something stupid.”