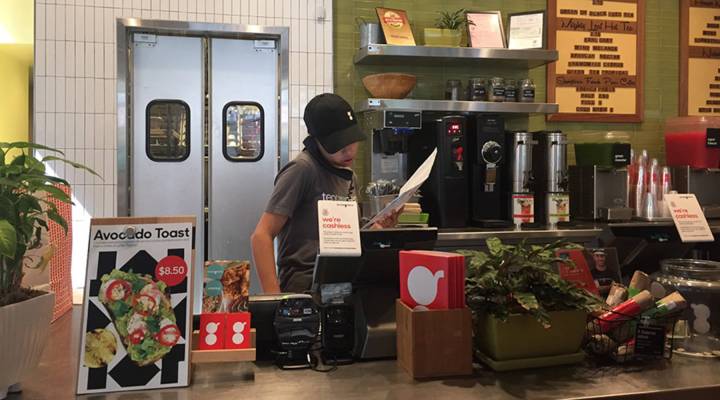 COPY
Tender Greens is the fast-casual restaurant chain you may not have heard of. Maria Hollenhorst/Marketplace

Tender Greens is the fast-casual restaurant chain you may not have heard of. Maria Hollenhorst/Marketplace
Listen Now

Tender Greens is a Los Angeles-based fast casual restaurant chain that you may not have heard of, but there’s a good chance that the chain is hoping to come to a city near you. Operating in the competitive fast-casual sector of the restaurant industry, the chain wants to double its stores in the next several years, according to CEO Denyelle Bruno.

Marketplace host Kai Ryssdal spoke with Bruno at the chain’s location in downtown Los Angeles, where Bruno weighed in on the challenges facing retail companies these days. Bruno became CEO of Tender Greens last fall; previously she led retail operations for Drybar and Peet’s Coffee & Tea, to name a few. As a retail aficionado, we had Bruno share the retail spaces she found most inspiring. Here are her top three and the reasoning behind her picks.

“It would be impossible not to include Amazon. It’s fascinating to observe this movement. In my view, Amazon has created a difference between shopping and browsing.  Most people I know buy their commodities on Amazon, their groceries in store and their fashion in physical spaces or they have their go-to brands for fashion. Another retail way of putting it is the difference between destination and impulse.”

Shoppers enjoy the grand opening of a Trader Joe’s in Pinecrest, Florida, in 2013.

“I love Trader Joe’s. Maybe I’m missing something, but it seems like folks rarely talk about Trader Joe’s. They do so much, so well, so consistently and for so long. I don’t even know where to start with all the things they get right. They are like the humble hero, the soft-spoken giant, the Radiohead of grocery retail.”

Shoppers pass by the Anthropologie holiday display in Rockefeller Center to hunt for bargains the day after Thanksgiving, or Black Friday, in 2008 in New York City.

“Anthropologie because they nail the lifestyle concept. They have so perfectly captured their audience that their audience looks to their stores to learn how they are supposed to present in the world at large.”