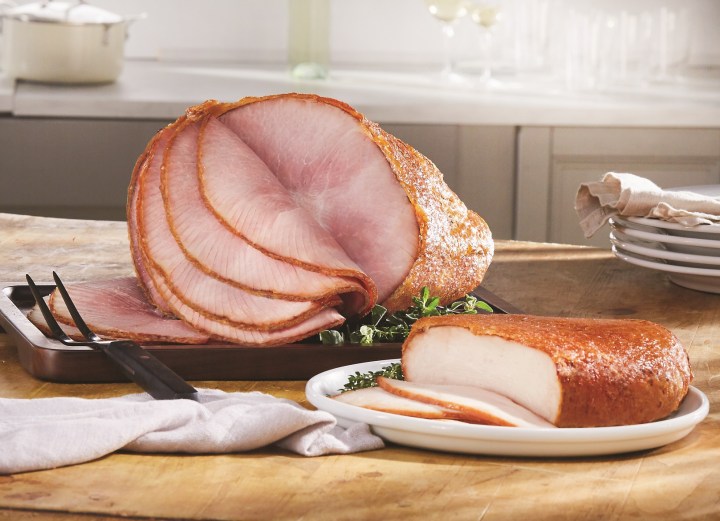 A view of one of Honey Baked Ham's signature spiral-cut hams and its turkey breast. The HoneyBaked Ham Co.
I've Always Wondered ...

A view of one of Honey Baked Ham's signature spiral-cut hams and its turkey breast. The HoneyBaked Ham Co.

Now that the holidays are upon us and The Honey Baked Ham Company is advertising again, it’s brought up a question that I have every year: how do Honey Baked Ham locations stay open year round?

After a long week at school, Angela Steen remembers her grandmother picking her up, taking her shopping, then treating her to lunch at a Honey Baked Ham.

“Maybe I’m weird, maybe it’s because my grandparents raised me, but most kids want to go to McDonald’s or Burger King,” Steen said, laughing. “But I wanted to go to Honey Baked Ham because the sandwiches were so good.”

She’d then sit down with her grandma at one of their stores in her hometown of Pensacola, Florida, where they’d spend quality time together.

“It’d be like our own special girls’ day thing,” Steen said.

Now grown up and living in Memphis, Tennessee, she still goes maybe a couple of times a month, swinging by after getting her nails done. For Steen, the experience is nostalgic — a reminder of her childhood.

How Honey Baked Ham has thrived

The Honey Baked Ham Company is named after its core product: a honey-glazed, spiral-cut ham that serves as the centerpiece of Christmas tables across the country.

In between commercials prodding you to give the gift of a new car or an engagement ring this holiday season, you’ll see advertisements from Honey Baked Ham urging you to pick up one of their famous hams, which can weigh up to 16 pounds.

But R.J. Hottovy, head of analytical research for Placer.ai, pointed out that the company has a comprehensive menu, selling items that customers (like Steen) can pick up beyond the major holidays. Items include turkey, ham and tri-tip sandwiches, along with salads, sides and desserts.

Honey Baked opened its first store in Detroit back in 1957, and has since expanded to include 400 year-round retail locations across 40 states. Customers can now also order their food online or have their items delivered via third-party apps. Discovering the company’s presence on UberEats has been revelatory, even amusing, for some.

Darren Tristano, the CEO of Foodservice Results, said the chain fits into a category known as “home-meal replacement,” which encompasses ready-to-eat meals that are convenient for consumers — especially during social or family occasions.

“They’re able to deal with large, off-premise occasions, which can be pretty lucrative, given the cost to feed six to 20-plus people,” he said. “But still, because of their staffing, they’re able to manage the consumers that just come in for something to eat and they’re able to serve them.”

Another thing the restaurant does well, he mentioned, is that it sells “high-quality items” that aren’t easy to replicate at home, since making a spiral-cut ham can take several hours.

That high quality is something that Steen has noticed and keeps her coming back. “It’s quality-cut meat for a sandwich. It’s different, out of the norm, from other chain sandwich restaurants,” she said.

Hottovy from Placer.ai said the chain has three big periods of the year: Thanksgiving, Christmas and Easter.

Within a week of these holidays, he said that the chain will see between two and five times the volume (across the chain) compared to any other given week. During holiday seasons, Honey Baked can see up to 200,000 visits per week, according to Placer.ai data.

Hottovy said marketing and menu innovations have likely helped drive the ham company’s increased success during the holiday seasons. Location3, a digital marketing firm, touted in 2017 how Honey Baked teamed up with the agency to reach out to new customers and “better understand” their current customer base. In a report, the firm wrote that Honey Baked Ham launched marketing campaigns using advertising platforms such as Google’s AdWords.

Then, after the holidays, the visits slow down as you might expect.

“Like a lot of businesses, it’s definitely going to see heavy swings and seasonality,” Tristano said.

But even beyond Thanksgiving or Christmas, the Georgia-based restaurant chain still garners tens of thousands of customers. Between 2017 and 2021, HoneyBaked averaged roughly 55,000 visitors per week across all chains for non-holidays, according to Placer.ai data.

“Which is pretty solid for a restaurant brand like this,” Hottovy said. He noted that your typical Honey Baked Ham store can attract about the same amount of visits as a Subway.

Tristano said other restaurants in Honey Baked Ham’s category include Boston Market, which also sells home-style meals. However, with the way the company operates, Tristano said a closer competitor would be the deli and bakery sections of a supermarket.

When it comes to restaurants that specifically sell centerpiece food items, like hams, he said there are some direct competitors, but they lack a large retail presence.

“You’re going to see small competitors, but nobody has really built a brand as strong as Honey Baked — and as broad,” Tristano said.

Hottovy said he thinks the company has done a good job when it comes to brand awareness.

“I really think they’re almost synonymous with this particular category, with the ham category. If that is such a thing,” Hottovy said.

But right now, although the company has done well for itself, it may not be as synonymous with your typical, go-to casual lunch place. Some people still do primarily associate it with holiday events.

“I think when people think of lunch, they don’t automatically think of Honey Baked Ham, so they don’t know to go there. I wouldn’t be surprised if people didn’t even know that they have sandwiches and meals,” Steen said. “But I highly recommend it.”

She’s particularly a big fan of their ham salad. “It’s out of this world,” she said.