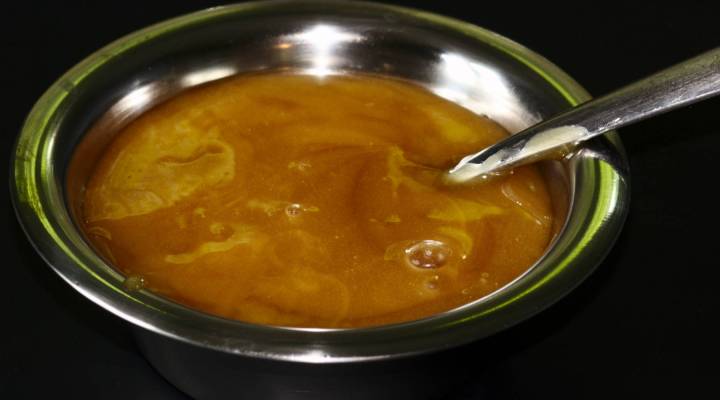 Manuka is one of the world’s most expensive honeys.  Deriving from the nectar of the Manuka bush (Leptospermum Scoparium), which grows most copiously in New Zealand, the honey sells at high-end stores in London for as much as $250 a pot. The high price is due to the honey’s medicinal properties; it is powerfully anti-bacterial and is used to combat infections that cannot be treated by antibiotics.  New Zealand producers dominate this lucrative trade but they now have an, albeit small, rival: the Tregothnan Estate in Cornwall, South West England.

Manuka plants — imported  from New Zealand — have been growing in the botanic garden of the Tregothnan stately home  since the 1880s. Forever experimenting with exotic plants, the estate became England’s one and only commercial tea plantation a decade ago. And now Managing Director Jonathon Jones plans to produce the world’s purest Manuka honey.

Jonathon Jones in the Tregothnan tea plantation, holding a branch of a Manuka bush.

“Next summer we will attempt to ensure that our bees only gather Manuka nectar,” he said. “Using insect nets, we will try to enclose the bees on our bushes so they produce 100 percent, mono-floral Manuka honey.”

New Zealand is  not impressed. Rashda Ali, general manager for Europe at Comvita, a natural food company, said fellow New Zealand producers have tried to confine the bees and it didn’t work.

“The bees  get very disoriented. It’s not a good way to manage bees,”  she told Marketplace.

Ali is equally dismissive of Tregothnan’s  honey. “It’s a nice table honey, but it’s not Manuka,” she said. “Manuka is a Maori word. The Maoris named the Leptospermum plant Manuka,  and therefore Manuka should come from New Zealand.”

After all, she said, champagne was developed over centuries in the Champagne region of France, and therefore has to come from that location. In the same way Britain’s traditional Cornish pasties can only be labeled as such if they have been made in Cornwall.

At the Tregothnan Estate, a riposte from Jonathon Jones: “Since the estate has had  Manuka bushes for well over a hundred years, they must be regarded as home-grown and, anyway,  New Zealand’s Manuka honey is not totally indigenous: the bees used to make it are European!”