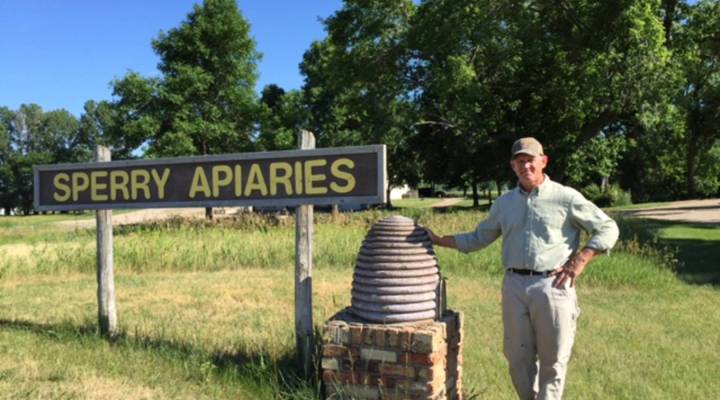 COPY
Beekeeper Mark Sperry in Kindred, North Dakota says he has to travel increasingly long distances to find good forage areas for his bees due to increased acreage of corn and soybeans near him. Annie Baxter/Marketplace

Beekeeper Mark Sperry in Kindred, North Dakota says he has to travel increasingly long distances to find good forage areas for his bees due to increased acreage of corn and soybeans near him. Annie Baxter/Marketplace
Listen Now

It might seem surprising that North Dakota, one of the northernmost and coldest states in the nation, is the bees’ knees for honey production.

It produces more honey than any other state. In summertime, North Dakota’s climate is just right. It’s conducive to flowers’ production of nectar, which bees use to make honey.

“Warm days and cool nights are optimal for nectar secretion for a number of plants that honeybees visit. So that helps,” said Mark Sperry, owner of Sperry Apiaries in Kindred, North Dakota.

Sperry said he’s observed an influx of commercial beekeepers into North Dakota in recent summers because of the state’s rich habitat for bees. States farther west suffer from drought.

And in parts of the Midwest, like Illinois and Iowa, once considered decent honey production country, Sperry said, “the landscape has changed to intensively farmed corn and soybeans.”

But that advantage seems to be on the wane, based on Otto’s research. He studied land use changes around beekeeping sites in the Dakotas from 2006-2014 and found grassland areas favored by bees are shrinking.

Sperry is seen standing with a smoker next to a honey super, or a box containing frames on which bees build honeycombs.

Over that period in North Dakota alone, 1.6 million acres came out of the federal Conservation Reserve Program.

“And what’s becoming more common is corn and soybeans,” he said.

Those crops don’t just cut into bees’ forage options. They bring other stressors, like pesticides. Some scientists argue that a class of pesticides, neonicotinoids, harm pollinators.

“Neonicotinoids have become a big issue in the literature,” Otto said.

Otto said beekeepers can’t just up and move — they’re already in the Dakotas because conditions are worse elsewhere.

Beekeeper Mark Sperry said he’s not sure whether the expansion of corn and soybean production near him is to blame for a higher mortality rate among his bees in the winter. Pests like parasitic mites also play a role.

But he said there’s no question that it’s becoming harder for him to find areas with good forage options for his bees, like alfalfa or clover. He keeps hives at 35 different locations around his base in Kindred, North Dakota, and used to travel at most 30 miles to any one of those locations. That distance has increased in recent years.

“My most distant bee locations are about 50 miles away from here,” he said. “So travel time in that situation adds up.”

That said, there are some agricultural crops Sperry said he’s glad to see more of lately. He said commercial production of sunflowers has increased near him, which helps his bees’ health and honey production.