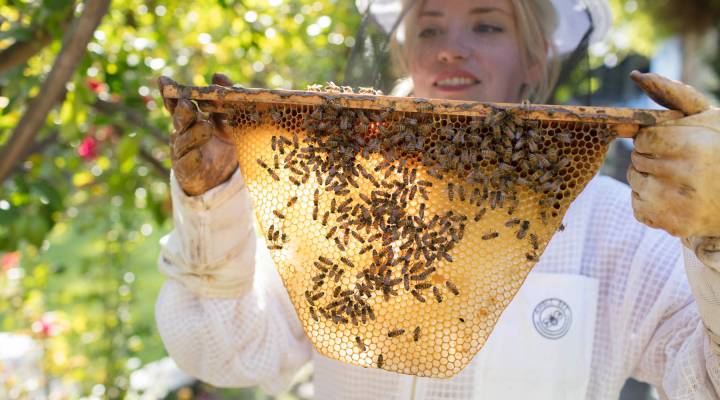 COPY
“I was at the office job 40 hours a week,” says Hilary Kearney, founder of Girl Next Door Honey. “And then on my lunch break, I was doing things like catching swarms, just really cramming in bees into all the little cracks of time that I had left over.” Tosca Rodigonda. Courtesy of Hilary Kearney.
My Economy

“I was at the office job 40 hours a week,” says Hilary Kearney, founder of Girl Next Door Honey. “And then on my lunch break, I was doing things like catching swarms, just really cramming in bees into all the little cracks of time that I had left over.” Tosca Rodigonda. Courtesy of Hilary Kearney.
Listen Now

My name is Hilary Kearney, and I’m from San Diego, [California], and I have my own beekeeping business.

So I have this office job and I really wasn’t happy. I was, like, the weirdo in the office. I had chickens, I had bees. I got to the point where my hobby had turned into, really, a business, and I was now providing services and charging people. You know, I was at the office job 40 hours a week, and then on my lunch break I was doing things like catching swarms, just really cramming in bees into all the little cracks of time that I had left over. I had this whole plan to quit at the end of the month, and then at the beginning of the month, my boss called me into H.R. and they let me go. And he basically said, “Hilary this is going to be the best thing for you.”

That first month was so overwhelming. I just started saying yes to everything, and then I realized that’s something that everyone who has a business struggles with is figuring out what they want to keep and what they don’t want to keep. But my business is really weird. It’s predominantly education. So I do education for new beekeepers. And I also do bee removals and then I manage hives for other people.

I know that most businesses don’t make a profit in the first, at least first couple of years. And so to be able to do that in the first year, I mean, I essentially made more than what I was making at my office job. The jobs that I’ve had before this — working in the office, I worked in a deli, I worked as a barista — and you deal with a lot of unhappy people. Now I get to deal with this kind of really narrow segment of people that are very different from each other but just they’re all united with this interest or love for bees. And it’s really cool.

Our series only works with your help and your stories. Let us know how your economy is doing on the comment form below, and your story might be featured in a future installment of My Economy.