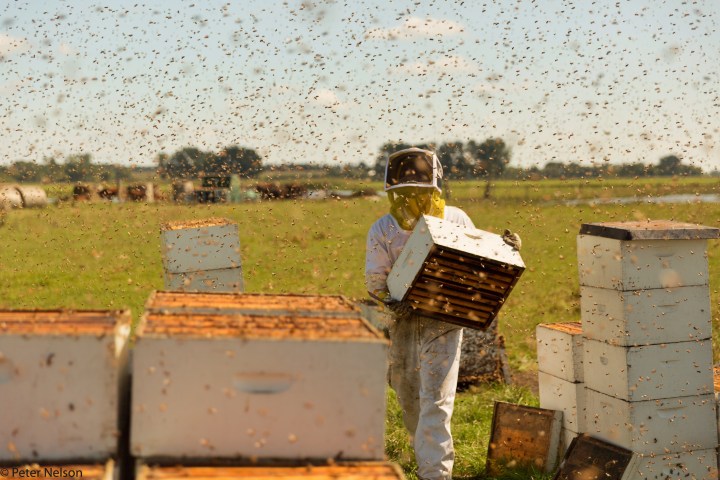 COPY
A beekeeper in South Dakota loads bee hives onto a truck for transport. Courtesy of Peter Nelson

A beekeeper in South Dakota loads bee hives onto a truck for transport. Courtesy of Peter Nelson
Listen Now

Much of the American agricultural industry is heavily reliant on one thing — honey bees. Pollinators, like the honeybee, are pivotal in growing and cultivating our fruits, vegetables and nuts.

Unfortunately, more and more are dying due to a number of factors. Beekeeper and film director Peter Nelson sat down with “Marketplace Morning Report” host David Brancaccio to talk about his new documentary “The Pollinators,” which explores the bee pollination industry and what’s causing more bees to die every year. The following is an edited transcript of their conversation.

David Brancaccio: Tell me about this dramatic logistics operation to get the bees to crops right at the moment those crops need the bees?

Peter Nelson: It’s kind of a great story because nobody knows it really happens. They use massive amounts of bees that are moved across the country every year for pollination. So they move two million bees for almond pollination every year out to California from all over the country in order to do that one pollination and from there they spread out and they’re moved by truck at night, usually to remote places to so many other crops. Like 400 crops that we eat are commonly pollinated by honey bees.

Brancaccio: I was watching the film, I was so surprised. The same little critter, the same bee that helped pollinate blueberries in Maine might end up in California [at a] different time of the year?

Nelson: Exactly right. And honey bees have this unique quality, in that they go back to their hive at night. And you can palletize them and you can move them on trucks and so they’ll put 400 pallets, 400 hives of bees on a truck and move it at night to another location.

Brancaccio: It’s this dramatic operation. What — generally smaller —businesses [are] doing this?

Brancaccio: And some crops like corn don’t need pollination from bees. But other big crops, almonds, need a lot of bees?

Nelson: There are about a million acres of almonds in the Central Valley, California, and they need two million beehives — two hives per acre — in order to pollinate that crop and they’re almost exclusively pollinated by honey bees.

Brancaccio: Wow. Now there are a lot of assaults on our friends, the bees. Parasites you point out in the film, poor nutrition is another one?

Nelson: Yes, it’s a lack of diversity in the forage because of the changes in agriculture, things have gotten much more simplified. So you have monocultures of corn, of soy, of almonds. And so the lack of diversity of forage is really important. Bees need a wide variety of nutritional sources to be healthy just like we do.

Brancaccio: And then there’s another assault on the bees, pesticides. There’s the residual variety that might be just hanging around. But also, farmers are supposed to coordinate when they spray a pesticide. They’re not supposed to do that when there are bees around. But that doesn’t always happen?

Nelson: No. In agriculture areas, oftentimes farmers don’t know what the next farmer next door is doing. And the next farmer may have pressures that they need to spray and they’re not always as good as they could be about alerting the neighboring farmer that they’re going to spray. And so often the bees get kind of caught in the crossfire.

Brancaccio: You saw that once right? You were there with your cameras.

Nelson: Yes, it was very sad. I think it ended up being about 5,000 hives ended up being killed from an inadvertent spray of a neighboring farm out in the almond pollination.

Brancaccio: So parasites, troubles with nutrition, pesticides, but also the way we do agriculture in America. That’s one of the central themes of your of your film, really.

Nelson: Yes, we wanted to connect this right to people’s plates. And it’s important to know that these beekeepers are not moving these bees because they necessarily want to. It’s the changes in our agricultural system that really require them to do this change and to move the bees around like this. And it’s kind of the important story that everybody doesn’t know they need to know, that this really affects every one of us every time we sit down at the dinner table.

Brancaccio: Does it help at all to have a pollinator garden in front of your house?

Nelson: Absolutely it helps. I mean, there’s something about this issue that is completely actionable. And it’s one of the things that drew me to this subject is that there’s something that everybody can do to make a difference.