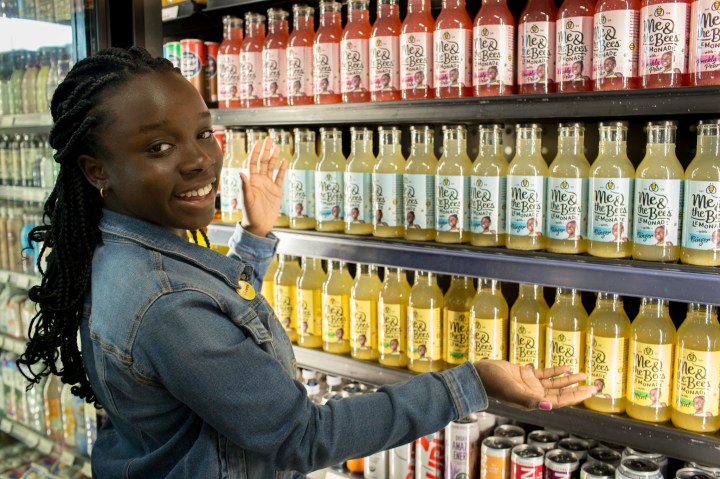 At 15 years old, Mikaila Ulmer is a student, bee ambassador, social entrepreneur and author. The origins of her company, Me & the Bees Lemonade, which donates a portion of sales to bee conservation, dates back to a lemonade stand Mikaila started in kindergarten for a children’s business competition in Austin, Texas. After 10 years in business and an appearance on the television show “Shark Tank,” Mikaila’s company is a national brand. Her flaxseed lemonade is sold in 1,500 stores in more than 40 states.

“I don’t think that there’s a limit or any particular guidelines on who can become an entrepreneur who can start a company,” Mikaila told “Marketplace.” “The perception is that … there’s, like, a certain race or gender or age that you need to be if you want to make it big, or be successful, or grow your company. But me and so many other kid entrepreneurs and Black-owned businesses are proving that’s not the case.”

Click the audio player above to hear Mikaila tell her story. The following is an excerpt from her new book, “Bee Fearless: Dream Like a Kid.”

I don’t remember much about being stung by my first bee, because I was only four and a half years old, but I do remember one part clearly. I got stung in the neck. The neck! I was at a neighbor’s party up the hill from our house when it happened. Friends were there, and they were playing music. I was spinning around, dancing with my arms stretched out when something hit my face, so I went to swat at it, and I clearly remember hitting something with my hand. I must have made the bee angry, because before I knew it, something sharp hit my neck. My family was there, and there was lots of crying. After a while, my neck stopped burning and started to sting. I guess that’s why they call it a bee sting. All around our neighborhood were large aloe plants. My dad tore off a piece of an aloe leaf and told me to hold it to my neck. I did as he instructed, and sulked for the rest of the party.

Then, exactly one week later, when we were at a family cookout, I got my second bee sting. This time in my ear! Two different bees, two different places. I actually thought that I would now get stung every time I went outside, or at least every seven days.

After the second bee sting, I didn’t even want to go outside, not even to help my dad in our garden or play with my little brother, Jacob. I tried to avoid any interaction with a bee and didn’t want to go near anything with wings. This was a problem for my family. We’re very outdoorsy, and not leaving the house wasn’t an option. My parents sat me down one evening and said, “Mikaila, you can choose to be afraid of bees. But that would mean not going outside and enjoying all the things you love to do. Or, instead of being afraid of bees, you could learn about them.” So we went to the library, and my bee research began.

Twin Oaks Branch Library was just a few blocks from my home, and I loved visiting it because it was always quiet and cool. In Austin, where our winters could be just as hot as our summers, you were always looking for places to escape the heat.

When I was a little girl, my favorite day of the week was Monday. Every Monday, my mom would take me to the library. I don’t remember our walks to and from the library, but my mom tells me I would stop every few steps to inspect something new: “Look, what’s that?” A few more steps. “And what’s that?” I was always asking questions. It took us a very long time to go a short distance.

When we got to the library, I had just as many questions about things. The library was a place where I could get a lot of answers to a lot of questions. I thought that was awesome! “The library knows everything!” I would say. I learned how to read when I was very young. My parents were amazed at how quickly I picked up words. I read to know the answers to my questions.

I always wanted to check out as many books as I could, but the librarian reminded me there was a limit. And my mom would remind me there were only so many books we could carry home. I had to decide which ones to choose, and it was always difficult. In my mind, there were so many topics to explore: from outer space to the deepest oceans. These books took me to unimaginable places. By Tuesday, I was ready for more books.

But the day I went to the library after I had been stung by two bees, I knew exactly what I was looking for: bee books.

At four-and-a-half, I couldn’t read most of the complicated subjects, but there were a few picture books in the kids’ section, so I started with those. I tried to learn anything and everything about bees! I also checked out a video about bee pollination. I remember the video played that wild “Flight of the Bumblebee” music by Nikolai Rimsky- Korsakov. My mom explained the music was from an opera and was well known. I buzzed around the living room like a bee in an opera. I thought it was fascinating that the video was told from the perspective of the bee, who said things like I’m super fuzzy, and pollen sticks to the hair on my legs when I visit flowers. The bees then move the pollen to a special area on their back legs called pollen baskets. That was interesting. I didn’t know that. I stopped buzzing around the room and really paid attention. Without me, you wouldn’t be able to eat most fruits, nuts, cheeses, or any dairy, because cows eat alfalfa and alfalfa is pollinated by bees.

“Is this true?” I asked my parents with wide eyes.

Even though I wasn’t able to fully grasp the effect of bees on our environment, I still realized many things I loved to eat, not just honey, came from bees. Yes, they stung, and yes, they were a little scary for that reason, but they were an important part of our world. I also learned that bees were dying at an alarming rate. So I decided I was going to save them. But how?

Without knowing it, I was doing the first three most important steps in starting a business: First, I was identifying a problem; second, I was researching the problem; and finally, I was starting to do something I felt passionate about. These first three steps are critical. You always want to clearly identify and research your problem before you get started, and you always want to be involved in a business or product you’re passionate about. I can’t stress this enough. If you are not passionate about your idea, it will be hard to stay engaged in the work it takes to grow a business. And believe me, there’s a lot of work ahead of you when you start a business.

Excerpted from “Bee Fearless: Dream Like a Kid,” by Mikaila Ulmer. © Reprinted by permission. All rights reserved.