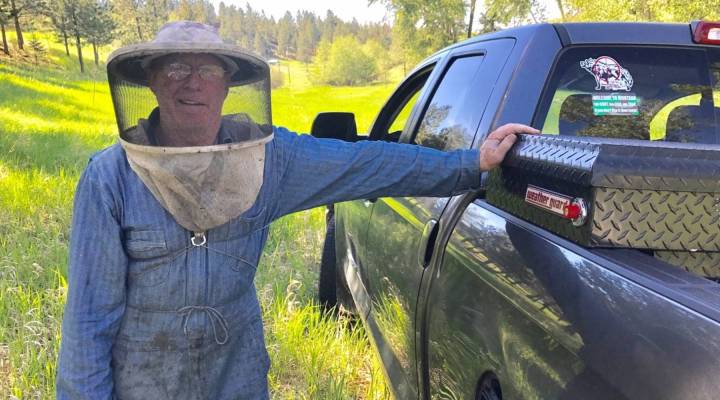 It’s a sweltering day near Missoula, Montana and commercial beekeeper Bert Wüstner is pulling honeycombs out of a beehive. His daughter is pumping smoke into the hive to keep the bees calm, but they’re swarming around my microphone, my bare legs, and I’m really hoping I don’t get stung. “You’re not nervous are you?” Wüstner said.  He shakes one of the combs and droplets of nectar fall out. “It shakes out just like rain,” he said. “That’s brand new honey.”

Honey consumption is on the rise in the U.S. The industry is worth about $335 million, and we eat about a half-pound more honey now than we did back in 1990. But in some states, like Montana, all that honey occasionally comes at a cost – the lives of black bears.

Wüstner leases about 50 apiaries in western Montana, and almost all of them are secured with reams of solar powered electric fencing. It’s there to keep black bears out. They love beehives. Jamie Jonkel, a bear manager for Montana Fish, Wildlife and Parks said placing a beehive on the ground in Montana is “like putting a dead horse in the back pasture and not expecting bears to feed on that dead horse.”

So Jonkel encourages all beekeepers to surround their yards with an electric fence, which deters bears. But they aren’t required by law here in Montana – instead, the law says a beekeeper can kill a black bear if it attacks their hives “I had to kill one last year,” Wüstner said. “It was in a big stockpile yard with over 800 hives, and I could not put a hotwire around that many bees. You can see the size of this yard is only 24 hives. Imagine 800 spread out from here to almost as far as you can see.”

He said it’s unfortunate the bear died. “But imagine a rancher and something’s killing all his sheep,” he said. “Or his cows, I mean, it’s the same situation. Bees are actually taxed as livestock in the state of Montana, and so I’m just protecting my livestock just like any other rancher or farmer would do.”

As Wüstner said, bees are considered livestock by the state of Montana – right up there with cattle, horses and sheep. Each hive can produce a couple hundred dollars’ worth of honey. So when a black bear attacks a hive, a beekeeper can defend it. Lethally. And this bothers John Griffin, director of the Urban Wildlife Center for the Humane Society of the United States.

“It’s a real travesty when bears are lethally controlled for something they cannot avoid,” Griffin said. Unlike other states, such as Maryland, electric fences aren’t required by law in Montana, and Griffin thinks they should be. “It not only prevents unnecessary killing but it provides better and more effective long-term solutions,” he said. “So it’s better for the person with the beehive, just as it’s better for the environment in not having to kill the bear.”

Over the past five years, black bears have damaged more than 600 hives across Montana, costing beekeepers nearly $150,000. That’s why most commercial beekeepers in the state do a good job of securing their yards with electric fencing anyways – according to Wüstner, it’s part of the cost of doing business. “I have better things to do than trying to fight some bears,” he said. “You know, I’d rather be able to sleep at night and not have to worry about it.”

To date, Wüstner said he’s spent thousands of dollars securing his bee yards, and Jared Marley, director of Margo Supplies, a wildlife management company, said building electric fences for beekeepers in bear country is a growing part of his business. “We’re realizing that electric fencing, it’s not just the environmental way to solve bear damage, but it’s also simply the most effective way to prevent bear damage,” he said.

But Wüstner said those fences will fail occasionally, or he just has too many bee hives to secure. And in those rare cases, he believes the current law in Montana allowing him to kill a black bear is necessary. “If someone says you can’t kill a black bear in your bees, and you have no other choice, what are you going to do?” he said.

While there’s no state database that says how many black bears are killed by beekeepers in Montana – the animals aren’t endangered and their population is doing well – the three bear managers I spoke with said, on average, between one and five are shot in their regions every year. And that number is actually pretty low, considering there are thousands of black bears in the state, and thousands of registered bee yards. Jonkel chalks it up to electric fencing.

As we get into Wüstner’s truck, I notice a sticker of a wolf in crosshairs on his window. Wolves threaten cattle and sheep in the American West, and bears threaten bees. As we’re sitting in the quiet of the pickup truck, Wüstner turns to me. He said he’s concerned this story I’m doing may paint him in a bad light.

“Because one bear is killed, ‘oh, beekeepers are killing them all the time … it’s simply not true,” he said. “This is crazy. When lions get into people’s stuff, and they’re killing their pets, they make no hesitation to call the Fish and Game and have somebody destroy it. I mean, it happens a lot. Way more than the bears that beekeepers kill, I’m telling you.”

The lions he’s referring to are Mountain lions, which kill cats and dogs in the American West. And what Wüstner said was true last year and in 2012. Data for other years is not easily accessible.