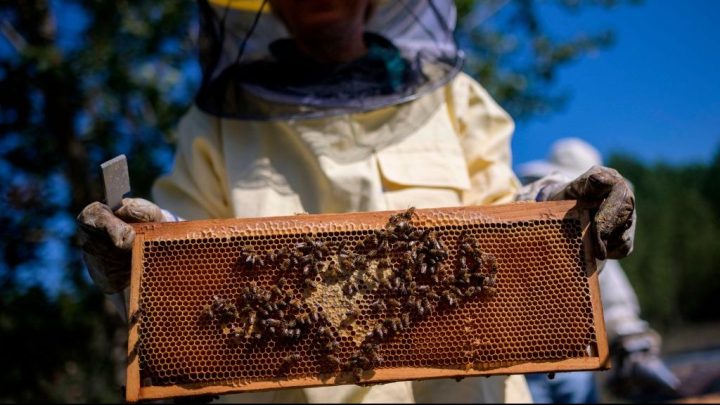 The two-year anniversary of Brexit on Jan. 1, 2020, is swiftly approaching. And while the post-Brexit trade regime isn’t exactly new, some businesses are still struggling to navigate the change in import costs and duties that resulted from the United Kingdom’s departure from the European Union.

Samantha Wallace, who runs From Field and Flower, a honey shop in London’s Borough Market, imports much of her goods from the European Union. She was able to put off importing another pallet of honey until last summer, but since then, she’s had to contend with expensive duties and the rise of the coronavirus omicron variant, putting a possible dampener on holiday foot traffic in the market.

“Marketplace” host Kai Ryssdal spoke to Wallace about her holiday business and experiences importing honey. The following is an edited transcript of their conversation.

Samantha Wallace: Well, I don’t want to jinx it, so I’m touching the wood on my desk right now, but actually things are going pretty OK for us at the moment. We’ve had a kind of, I guess what they call here an “open summer.” People have been out and about, so we’ve actually had a really good, strong summer’s trade, which has brought us up nearly to pre-pandemic times. It’s a weird thing to say now, but it’s been three months of consistency, but I love it because we’ve just realized how little consistency we’ve had for the last 24 months. So I guess I’m cautiously optimistic.

Ryssdal: Well, OK, so here comes the part where I rain on your parade, because it’s getting cold in the U.K. How are you going to get through the holidays? What’s your best guess?

Wallace: We are doing OK for kind of the early Christmas shopping. We tend to have a last-week rush, but December’s pretty busy. We are concerned because there is a new variant, and that is worrying. But our balance sheet, as you can imagine, is going to be sitting in beautiful, liquid, wonderful amber gold. But we need to convert that into all cash flow.

Ryssdal: That was a brief moment of poetry on the program today, but look, let’s talk about that beautiful, liquid, gold balance sheet for a second. You are our small business barometer for import-export costs having to do with Brexit, and we’ve talked about that a lot. And I wonder now that Brexit is almost old hat now, is the new trade relationship still a thing for you? Have you just dealt with it? Where are you on that?

Wallace: How can I put it? It’s painful for us. I mean, we’ve not got used to it yet because each shipment is always a bit of a surprise. On the horizon is a big change in January. Honey, as you know, is produced by bees. That means that some legislation [on importing animal byproducts from the EU] now moves into effect, so we’ve had it lurking over us since last summer, we thought this was going to come in.

Ryssdal: How much are you spending on experts and consultants and people to help you figure out the maze of all of this stuff?

Wallace: Ah, well, absolutely nothing, which is great on one level.

Wallace: Yeah, well, a little business like us, we can’t really afford it. And partly we are on some level — from many points of view in the customs world — very uncomplicated. But with the new animal stuff coming in January, that becomes, as I understand it, vastly more complicated. I have to register with a new system. And that is a concern because that could put us, what’s the word? Oh, a “spanner in the works.”

Ryssdal: Yeah. So I think even an American audience is going to understand that one. Look, has there been a time during the pandemic — or then before that, Brexit — where you just said to your husband, “Chuck it, we’re gonna do something else. I can’t even handle this anymore”?

Wallace: I think it’s fair to say we’ve considered it and that’s always kind of in the back pocket if we have to. But I have to say, I mean genuinely, we really love what we do, and we really think that if we can just ride it out, we’re still pretty committed to what we’re doing. I think we still love it.