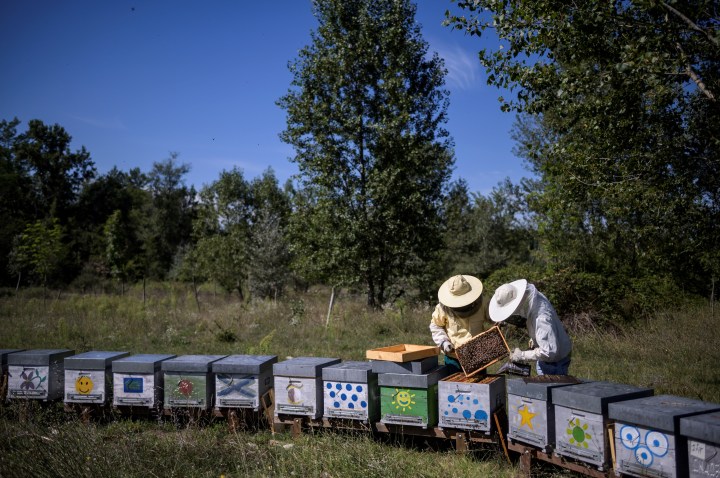 COPY
Beekeepers harvesting honey. "We pay tariffs to Italy, to let our products out of Italy," says Samantha Wallace. "And then we pay a tariff to the U.K., which is quite ironic, as a U.K. business." Marco Bertorello/AFP via Getty Images

Beekeepers harvesting honey. "We pay tariffs to Italy, to let our products out of Italy," says Samantha Wallace. "And then we pay a tariff to the U.K., which is quite ironic, as a U.K. business." Marco Bertorello/AFP via Getty Images
Listen Now

When leaders from the G-7 met over the weekend in Cornwall, England, one of the “meatiest” issues revolved around trade disputes between the United Kingdom and the European Union. Despite the former departing the latter at the start of the year, ongoing issues remain, particularly regarding the Northern Ireland border.

Small businesses in both countries are also navigating a new trade regime, and that’s meant plenty of growing pains. “Marketplace” host Kai Ryssdal checked in with Samantha Wallace, who runs a honey stall with her husband in London’s Borough Market, about importing new honey after Britain’s formal departure from the EU. The following is an edited transcript of their conversation.

Kai Ryssdal: The prime minister [Boris Johnson] was, was in Cornwall at the G-7. And there was talk of Brexit and this and that. And I said to myself, we have somebody who’s lived through it, and we wanted to get you on the phone to see how it is now because last time we chatted, [things were] maybe not so good for you in the honey business.

Samantha Wallace: I have to say, Kai, it’s been a roller coaster. So we have just done our first post-Brexit pallet with our main beekeeper in Italy. We had been counseled to expect long delays, holdups potentially at customs while things were checked. Surprisingly, it was only a couple of days longer than normal. So that was good. So I sound shocked, but so far it’s been OK.

Ryssdal: Well, let me ask you, though, what the paperwork was like, and more importantly, what the tariff situation is like because that was the whole thing about Brexit, right? You were gonna have to deal with paperwork and tariffs.

Wallace: Yeah, that has been painful. I have to be honest, when you’re not used to very complicated customs regimes, it’s quite scary. And that’s not my forte as a businesswoman, shall we say. That’s really not what I saw myself doing when we set up the company. So it’s been quite stressful because you have to have a lot of extremely precise, detailed information that you now give to the various customs borders, and you have [them] in various forms of triplicate, effectively. And then we have now to pay tariffs. So we pay tariffs to Italy, to let our products out of Italy. And then we pay a tariff to the U.K., which is quite ironic, as a U.K. business, to let our product into the country. I have to say, we are very fortunate that our product itself, honey, does not attract tariffs at the moment. But the cost is, is significant with the transport because we have a surcharge in transport as well for the extra layers of paperwork and bureaucracy that the hauliers do for us now. It’s going to cost us 36% extra, which is quite a lot. So it’s a volume game. But as a little business like us, you know, cash flow is a very pertinent issue.

Ryssdal: It’s tough to overstate how small a business you are. I mean, it’s a charming, little stall you have there in Borough Market, but it’s a tiny piece of real estate.

Wallace: We are micro-micro, yeah. I think it’s what people mean when they defined “micro.” We are superteenytiny. So this stuff is really like an ocean compared to a tiny, little fish in it, basically, which is what we are.

Ryssdal: Are you seeing people in Borough Market, by the way?

Wallace: Well, you know what, we’re seeing more people come to Borough Market slowly, but because we’re such a public space, the market is still, absolutely rightly, continuing to have restrictions on the amount of people that can come into the market. But what is really nice is that restaurants and pubs around the market are reopened, so people are starting to come back, but they’re not necessarily shopping like they are. So for us traders, we’re still looking at, you know, 50% down, really. We’ve got to kind of hang in there and keep up the endurance and just be grateful for the trade we have, which is OK. It’s not bad. So we’re very lucky. We’re very aware [that] we’re very lucky.