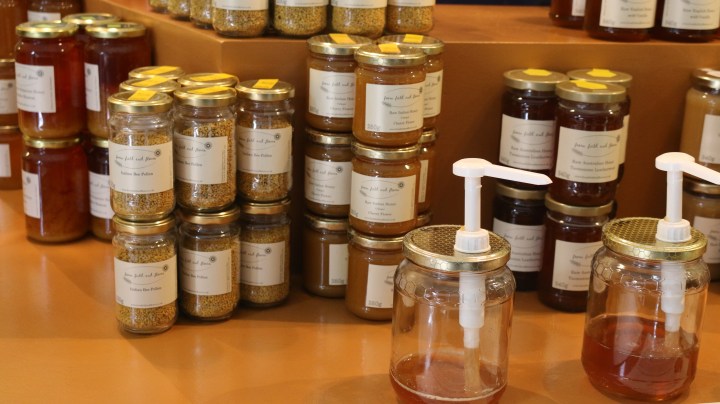 Samantha Wallace, owner of From Field and Flower in London, has spent the last few years preparing for Britain to exit the European Union. Now, with the final departure date only weeks away, her preparation for it has been hamstrung by the pandemic.

Marketplace first spoke with Wallace at her specialty honey store in London’s Borough Market. When the COVID-19 pandemic first hit London, Wallace closed her shop to focus on e-commerce, but has since been able to reopen. Now, with the final Brexit deadline on Dec. 31, Wallace was hoping for a Christmas business spike to better help her weather any turbulence, but the pandemic has made that unlikely.

The following is an edited transcript of Wallace’s conversation with Marketplace host Kai Ryssdal.

Kai Ryssdal: How are you? Because we are, as you know, on the cusp of Brexit. Negotiations are looking terrible. You’re trying to run a shop in a market in the U.K. How’s business?

Samantha Wallace: Oh, well, it’s been an interesting period for exactly those reasons. So, we in London are currently in something called “tier two.” And retail as part of that is open, of course, because it’s a very busy period up in Christmas. And so we are open and trading, but business is not good, it has to be said, and for, quite honestly, obvious reasons of people are just not coming and shopping. And we also have no international tourists.

Ryssdal: When we spoke in April, as we were all understanding how serious this pandemic was going to be, you had tried to do honey via e-commerce, you were working on online sales. It wasn’t working so well.

Ryssdal: How have you been the last five, six months? I mean, obviously, you’re still in business, right?

Wallace: We all were hanging on. So we had a good kind of mini surge of online sales, as everybody turned to online. It’s been really, really helpful. It’s been the thing that’s probably kept us afloat. But it’s not like we’ve done exceptionally well, when we suddenly pivoted to become an online business. It’s just, we just don’t move that rapidly. And I think with the ever-changing restrictions, the ever-changing news, you kind of don’t quite know which way you should be pointing in the first place. So we’re just kind of, you know, trotting along and just just trying to keep the wheels on the bus, basically.

Ryssdal: Last time we spoke, there was some doubt in your mind, I think, about whether you’re going to be able to keep the business. Do you still have that doubt? Or can you see the other way now that you’re gonna make it through?

Wallace: Oh, well, I’d like to think we’re optimistic because I think I guess to be in business, you have to be an optimist. But I think we won’t get on normal upsurge at Christmas, which is totally understandable. We get why. But you know, it’s one of those years where we could really do with it, because right around the corner, as you mentioned at the beginning, is Brexit. And that’s coming at a point where, you know, we can’t necessarily absorb all those costs. So it just seems, I don’t know, we’ll have to see. But we’re looking at some hefty tariffs and some hefty extra costs in terms of appointing customs agents to do paperwork, and things like that.

Ryssdal: So just to take a very quick tour into the geopolitical here with Brexit and the the idea of, I mean, it looks now for all the world like there won’t be some kind of agreement that will enable a soft departure from the European Union. Do you believe it’s ever going to come to pass that that there’s going to be finality on this? Just seems like we’ve been doing this forever, this Brexit thing?

Wallace: Oh, gosh, it does feel like it. And I know we’ve been talking, well, probably over a couple of years now, on and off, about Brexit. Yes. I believe, sadly, I think it’s going to come to pass. I think the frustration is not knowing exactly what will come to pass. But we are trying. We are making orders while we’re in the EU still, to try and stockpile a little bit. But frankly, we’re pretty cash-strapped at the moment. So we’ll do what we can and just try and ride it out. That’s our strategy, in short. It’s a very short strategy, but that’s it.