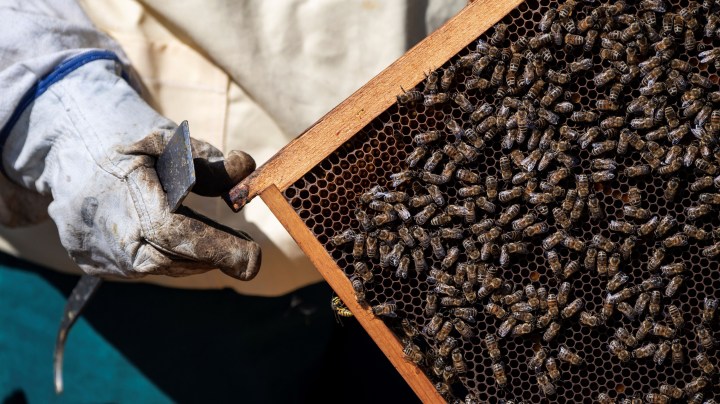 COPY
Bees at an apiary in Italy. "We've actually just had to, for the first time, raise our Italian honey prices," said Samantha Wallace. Macro Bertorello/AFP via Getty Images

Bees at an apiary in Italy. "We've actually just had to, for the first time, raise our Italian honey prices," said Samantha Wallace. Macro Bertorello/AFP via Getty Images
Listen Now

While prices are up around the world, inflation is especially pernicious in Britain. The country is in the midst of a historic national rail strike, and retailers are feeling caught in the middle. That includes Samantha Wallace, owner of the honey stall From Field and Flower in London’s Borough Market.

“I was saying to a friend, it’s a bit like pushing a boulder uphill, at the moment,” Wallace told “Marketplace” host Kai Ryssdal.

According to Wallace, inflation is affecting the costs she pays for importing and it’s poised to affect her customer base. “It will start to hit the kind of people that come to the market for pleasure,” she said. “And so that’s a worry.”

Wallace has had to change some price tags. “We’ve actually just had to, for the first time, raise our Italian honey prices,” she said. “We tried to put it off, but we are going to have to just do it, now, and hope that works.”

To listen to the interview, use the media player above.