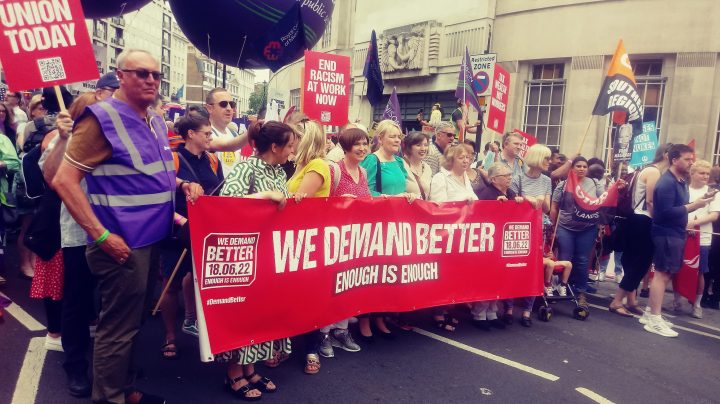 This week, the United Kingdom has seen the start of the biggest national rail strike in 30 years. Other groups of workers, including bus drivers and garbage collectors, had already walked out, and teachers, postal workers and some government-funded lawyers are planning to withhold their labor.

The unrest has been triggered by inflation, currently raging at just over 9% — the highest rate in the U.K. in four decades. As in the United States and elsewhere, the main causes are external: the war in Ukraine, the Chinese lockdowns and the post-pandemic surge in demand that overwhelmed disrupted supply chains. But the main target of the British workers’ ire has been the U.K. government.

In a protest organized by labor unions, thousands of people — many of them public-sector workers — marched through London last weekend calling for further action against the cost-of-living crisis.

“The way the prices have gone … the gas, electricity … astronomical! Absolutely ridiculous! And they’ve got to do something about it,” protester Barry Todman declared.

While inflation may be headed for double digits, wages overall are growing at just over 4%. That means real pay is falling fast. It’s a recipe for social disaster, said another protester, Philip Brand.

“There’s a real concern come the autumn when energy prices are set to rise sharply again that there will be civil unrest because people cannot make ends meet, even though they’re working,” he said.

Brand is a mental health nurse working for the state-run National Health Service, earning an “average salary.” Yet he said that at times he’s had to do without heating during cold weather and that at one stage earlier in the year, he actually faced the choice between eating and heating his home.

Alexandria Hassett, who also took part in the protest, has been hit harder by the soaring prices of energy and food. She told Marketplace that as an unemployed person on welfare, she’s struggling to survive on $150 a week.

“I am skipping meals. I won’t be eating until Monday, when I get paid next. Prices are so high, the money’s just not lasting me,” Hassett said. She was speaking on a Saturday morning, and so, she said, she faced two full days without food.

In a national survey commissioned by the BBC, more than half the 4,000 respondents said they’d bought less food or skipped meals to save money. Many, like 76-year-old widow Yvonne De Burgo, have cut back drastically on their social lives as well.

“I just don’t have spare money to go out and have coffee with my girlfriends and have a laugh and a joke. It’s just making me so isolated,“ De Burgo said.

She’s angry that the state pension on which she depends has only gone up by 3.1%, while the Bank of England is forecasting 11% inflation by the fall.

“They have no perception of what it’s like to have a fixed income with prices going up. Where are you supposed to get the extra money from?” De Burgo asked.

Where else but the U.K. treasury? Under intense political pressure, Chancellor of the Exchequer Rishi Sunak — Britain’s finance chief — unveiled an additional package of emergency support in Parliament.

“No government can solve every problem,” he told the House of Commons. “Particularly the global and complex challenge of inflation. But this government will never stop trying to help people.”

Sunak has tried to soften the cost-of-living crisis with a $45 billion package of cash payments and energy bill subsidies. And his department has indicated that the state pension will be raised next year, possibly by as much as 10%, to help retirees cope with the ravages of inflation.

But some economists, like Andrew Hilton of the Centre for the Study of Financial Innovation think tank in London, say this tidal wave of public money will only make matters worse.

“He’s pumping money in to try and hold prices down, which makes no sense whatsoever, economically,” Hilton said.

Even more money chasing too few goods: the classic definition of inflation. On the other hand, Paul Dales of the Capital Economics consulting firm said the government was duty bound to intervene as the U.K. faces the biggest fall in living standards since the austere 1950s.

“The support for household incomes is important and necessary, and especially as it’s been tilted toward the lower-income households who need it most,” Dales said, conceding, though, that this could be inflationary and would put more pressure on Britain’s central bank, the Bank of England, to raise the policy interest rate much higher than the current 1.25%.

The government’s largesse did not impress the protesters who marched through London on the weekend.

As most of them were public-sector workers, they demanded that the government ensure that their pay keeps up with the 9% inflation and that their standard of living does not decline any further. The government, however, is urging pay restraint because of fears of a wage-price spiral. Paul Johnson of the independent Institute of Fiscal Studies shares the government’s concern.

“If all groups of workers manage to get big pay rises,” he said, “then that’s bad news for all of us. Because that embeds inflation in the economy.”

It was precisely the vicious circle of big pay hikes triggered by the global rise in oil prices fueling even more general price increases that led to the economic turmoil of the 1970s. In Britain, it culminated in the so-called Winter of Discontent — a massive upsurge of labor unrest at the end of 1978 and the beginning of 1979.

Conditions are different today. Inflation is not as bad and the unions are not as strong. But some British observers are still worried that history could repeat itself and that a summer of discontent could be on the way.