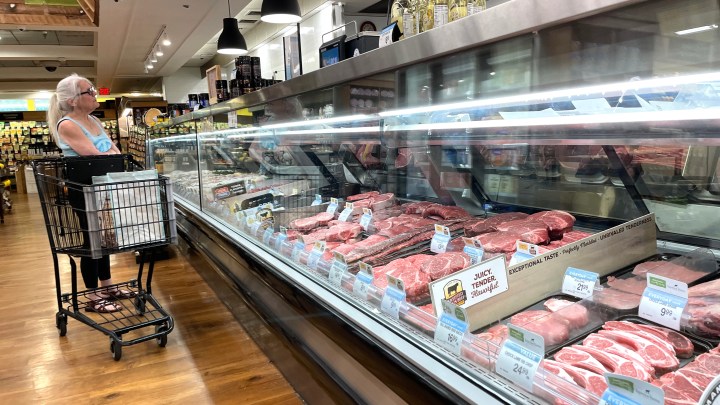 COPY
Meat prices have climbed 14% from a year ago, and it may take a while for those price gains to slow. Justin Sullivan/Getty Images

Meat prices have climbed 14% from a year ago, and it may take a while for those price gains to slow. Justin Sullivan/Getty Images
Listen Now

The consumer price index data for May that we got Friday was a big downer, with inflation at 8.6% year over year — one of the biggest jumps we’ve seen in decades.

So let’s look to the future, shall we? What kind of economy, and price levels, will we be left with when inflation eventually declines?

When policymakers talk about bringing inflation down, they’re talking about slowing the rate of prices climbing — not reducing the actual prices of goods and services.

“So, it’s kind of like the car is slowing down, but we’re not throwing the car into reverse,” said Laura Veldkamp, an economist at Columbia University.

Usually, after prices go up, they stay up. That’s because industries, consumers and wages adjust to make up for lost spending power. Wage growth, though, has been slowing.

Dean Baker, an economist at the Center for Economic and Policy Research, said wages are the reason he thinks some prices will go down. Also, partly because the drivers of these price hikes vary. “Clearly, there are different stories with different items.”

One case study: Inflation for appliances and furniture could slow now that retailers are overstocked. Other temporary issues include the war in Ukraine, the lingering semiconductor shortage and shipping delays.

But some essentials, like housing and food, are likely to take longer to adjust. Remember, said Jayson Lusk, a food and agricultural economist at Purdue: You can’t speed up nature. That’s why meat prices are so volatile — up 14% from a year ago.

Because producers will step up to meet demand. It’s just a matter of how long that takes and how long consumers can hang on. Lusk’s department recently conducted a survey asking families how rising prices have influenced their food-shopping habits.

“The most common response was, ‘I haven’t changed anything,'” Lusk said.

Usually, the food industry measures the stress on people’s budgets by noting changes in which cuts of meat or brands they’re buying. Lusk said shoppers aren’t behaving like they’re in a recession.