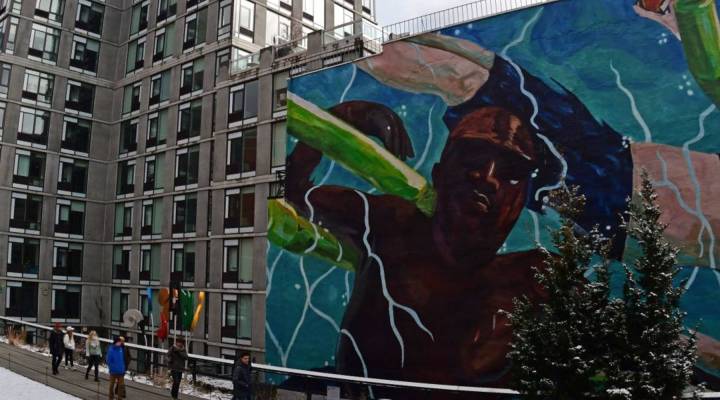 COPY
People walk past a mural along the High Line Park trail in New York City January 30, 2018. Opened in June 2009, the High Line meanders at an altitude of about 18-30 feet (5-9 meters) above the streets through blocks of office buildings and private residences on Manhattan's West Side.  EVA HAMBACH/AFP/Getty Images

People walk past a mural along the High Line Park trail in New York City January 30, 2018. Opened in June 2009, the High Line meanders at an altitude of about 18-30 feet (5-9 meters) above the streets through blocks of office buildings and private residences on Manhattan's West Side.  EVA HAMBACH/AFP/Getty Images
Listen Now

Eric Klinenberg calls libraries and parks “social infrastructure.” They’re spaces and organizations that shape the way people interact. His new book “Palaces for the People: How Social Infrastructure Can Help Fight Inequality, Polarization, and the Decline of Civic Life“ tells us how public institutions can not only enrich our day-to-day lives, but can save lives. He talked to Sabri Ben-Achour on Marketplace Morning Report.

Sabri Ben-Achour: What is social infrastructure?

Ben-Achour: So, what’s an example — like a library, I would think?

Klinenberg: I think of the library as the best possible kind of social infrastructure. It’s a remarkable institution that has a physical space that welcomes everyone regardless of your age or race or even your citizenship status. And it’s got all kinds of programs that draw people into situations that they might not otherwise have a chance to participate in.

Ben-Achour It sounds like there’s not a substitute for this online. For example, terrible things happen online but also people do connect in communities, people with shared interests. It sounds like you’re saying that’s really no substitute for getting people out and about and connecting.

Ben-Achour: You mentioned some of the effects of having robust social infrastructure, but are there other economic effects? I mean, does that translate into economic well-being?

Ben-Achour: So how do you invest in something like social infrastructure?

Klinenberg: There are lots of ways to invest in social infrastructure and to make it a key part of any infrastructure policy program. What you do if you wanted to build a seawall? We’re talking in New York City and there are all kinds of projects here to try to protect us from future Hurricane Sandys. Well you could just build a wall and leave it at that. But what contemporary designers are doing is building things like levees that expand the top and transform it so that it becomes something more like a public park or a recreational area. And those places can be there for social life but they can also draw people into economic activity as well.

Another great example of promoting social infrastructure comes from here in New York City too. Think of the High Line, which has become a model for cities around the world. It’s an old piece of of transit infrastructure that was abandoned and the city, with philanthropic partners, transformed it into a park area. The park area then stimulated massive amounts of economic activity and has become one of the most sought-after destinations in New York City. Social infrastructure investment is becoming a key part of placemaking and urban policy. It’s just that we don’t quite have the concept for it yet and so we haven’t recognized all the things it can do.

Ben-Achour: You mention it can be an economic driver, but you also found neighborhoods that were on par economically but still had different amounts of social infrastructure. So what would explain that?

Klinenberg: There are places and cities around the country that are very poor but still benefit from community gardens and branch libraries, active religious organizations, nice parks. And the people who live in those places are likely to be healthier, with longer life expectancy and better capacity to survive crises like hurricanes or heat waves than are people who live in comparably poor neighborhoods but who don’t have that social infrastructure to support them.

Ben-Achour: As you mentioned, social infrastructure encompasses a lot of things. Libraries, public spaces, even certain types of businesses like cafes that bring people together. How do you promote something so broad?

Klinenberg: Well, there are different kinds of social infrastructure and we can invest in them with different kinds of policy projects. So for instance, cities around the world will be spending billions and eventually trillions of dollars to build new infrastructure for climate security. And it’s important for us to talk about it this week with the hurricane in the United States. We can build simple walls for instance, and drainage systems. Or we can understand that social infrastructure can be built into those systems. And if we invest in climate security that’s also social infrastructure, we not only protect ourselves from the storm we also improve the quality of life every day. Think for a second about our response to September 11. We built a security infrastructure that’s full of walls and checkpoints, and they may or may not have protected us against a terrorist attack but they’ve certainly made our lives less efficient and less pleasant every day. I don’t want us to make that same mistake with climate security. And understanding that infrastructure can involve social infrastructure gives us a whole new menu of possibilities for making the places we live work better, while at the same time keeping us safe.